Please note, in order to protect the health and wellbeing of our staff and visitors during the coronavirus (COVID-19) outbreak, we have closed the ONCA Gallery and ONCA Barge until further notice. Please click here to read our full statement. 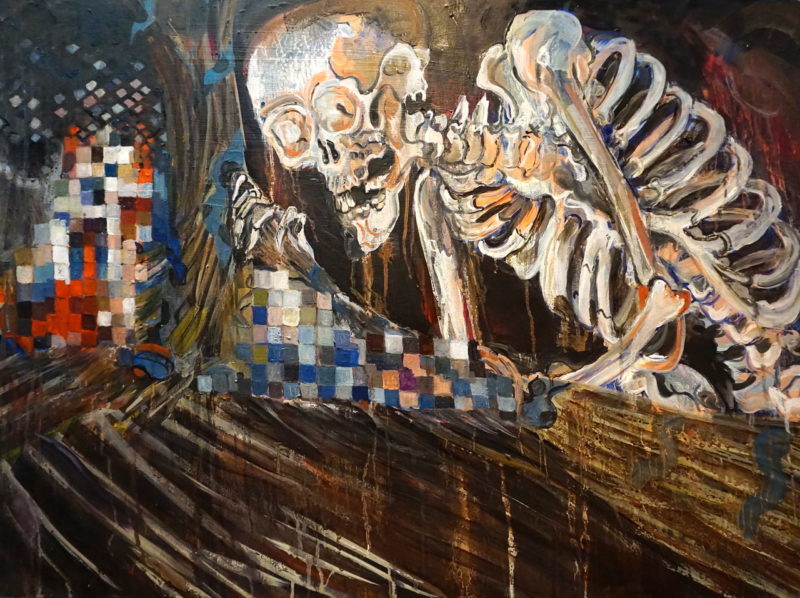 The Vanishing Act is a solo exhibition of new paintings by artist Jaye Ho.

The artist has looked at defacing portraits in art and political history. This body of work was inspired by visiting the Khmer Rouge former prison, now museum, S21. Photographs of Khmer Rouge leaders were vandalised – their faces violently scratched out.

The artist produced a series of portraits of war criminals and piles of skulls from genocide victims. Ho obliterates or redacts her imagery through the bizarre incursion of colourful geometric forms, also referencing digital pixelation to protect one’s identity from facial recognition software.

Ho uses dazzle camouflage in her paintings, geometric patterns originally used on British WW1 ships to protect them from German U boat attack. Artist Nigel Cooke says “we see piles of skulls from late 20th century atrocities blotted out with these dazzle abstractions. They seem at once to be decorating and obscuring the horror, aestheticising the view in artistic terms by introducing patterning or abstraction. Yet the dazzle camouflage creates this idea of a dubious vantage point, a questioning of where one stands in relation to what one is looking at”.

Ho explores the ‘morbid fascination’ of those who have not directly experienced war, something that she admits to having. The artist’s then-teenage aunts lived in Malaysia during the WW2 Japanese occupation. They dressed as boys to avoid rape and murder by Japanese soldiers. Comfort women were sex slaves for Japanese soldiers and at the end of the war many died by suicide or were murdered. Ho highlights the difficulty of bringing to justice perpetrators of sexual violence in conflict, especially when victims may choose silence over speaking out, because of the shame and trauma.

Unflinching from her severe subject matter Jaye Ho has produced a powerful series of work that address the proliferating horrors of atrocity crimes.

Jaye Ho is an identical twin, born in Oxford in 1980 to Singaporean and Malaysian parents. She lives in Hastings.

Recent shows include ‘Dazzleship NN201’ (2017) where she painted a Hastings fishing boat in Dazzleship camouflage, and Nigel Cooke’s ‘Telescope’ show at the Jerwood Gallery (2019). ‘The Vanishing Act’ will be her first show in Brighton (2020), and is funded by Arts Council England.

Jaye Ho also works for the UK Foreign and Commonwealth Office and has been working on human rights since 2017, including on the International Criminal Court, Freedom of Religion or Belief, and the Preventing Sexual Violence in Conflict Initiative.

The paintings in the show reflect her personal opinion, not the UK government’s.