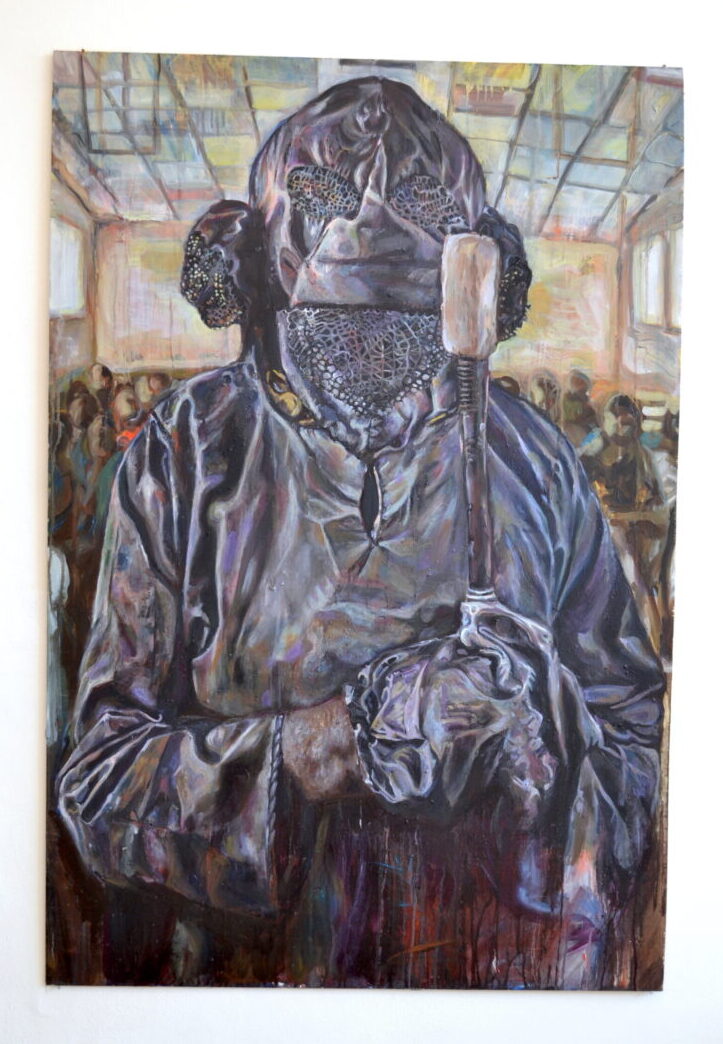 Join Jaye Ho for an online panel discussion exploring the relationship between art and conflict.

This event is a part of The Vanishing Act exhibition by artist and human rights policy adviser Jaye Ho.

Watch a recording of this event here (click CC on the menu bar to turn on subtitles).

Jaye Ho (b. England) is an identical twin, born in Oxford to Singaporean and Malaysian parents. She currently lives in Hastings. Jaye studied at Central Saint Martins (BA Fine Art 2003) and The Slade (MFA Fine Art 2006), exhibited nationally (including London, Birmingham, Hastings) and internationally (including Dublin, Krakow, Sydney). Recent shows include ‘Dazzleship NN201’ (2017) where she painted a Hastings fishing boat in Dazzleship camouflage, and Nigel Cooke’s ‘Telescope’ show at the Jerwood Gallery (2019). ‘The Vanishing Act’ is her first show in Brighton (2020), and is funded by Arts Council England. Jaye works for the UK Foreign Commonwealth and Development Office and has worked on human rights since 2017, including on the International Criminal Court, Freedom of Religion or Belief, and the Preventing Sexual Violence in Conflict Initiative.

Dr Errol Francis is an artist, former mental health campaigner, and artist in residence at the North Birmingham Mental Health NHS Trust and is currently charity executive in the United Kingdom. Errol was appointed CEO and artistic director of Culture& in 2016, in which capacity he remains. He was awarded his PhD from the Slade School of Fine Art, University College London, where his research focused on postcolonial artistic responses to museums. Errol was awarded an Honorary Doctorate of Letters from the University of West London in 2017.

Majid Adin (b. Iran) holds a BA in fine arts from Sistan and Baluchestan University, Iran and an MA in animation from Tarbiat Modares University, Iran. His critical stance towards the political regime, which took the form of a series of caricatures/comics and articles, led to his arrest. When released for his trial, he escaped and fled to Europe. He spent six months in the Calais ‘Jungle’ camp, where he worked with a theatre group (Good Chance Theatre). Through them, he got encouraged to enter Elton John’s The Cut Competition, which would be a commission of music videos for three of his 70s hits. Majid won and went on to direct ‘Rocket Man’. Since then, he has been learning English and keeps creating art and animation, while he collaborates with various filmmakers/singers and organisations.

Hernando Cáceres (b. Colombia) is an internationalist and has an MA in Human Rights (France) and an MA in Conflict Resolution (Colombia).  He has 15+ years experience working with victims and survivors of atrocities that took place during armed conflicts in Cambodia, Burundi, DRC Congo, Mali, Central African Republic, and his home country Colombia. Through his career he has become a trainer of trainers of pseudo-artistic techniques (developed by a different range of artists) that empower victims to take back again the track of their lives, facilitating processes of truth-seeking, justice, and reparations.

Image Credit: Painting by Jaye Ho, based on a photo taken by Diana Zeyneb Alhindawi