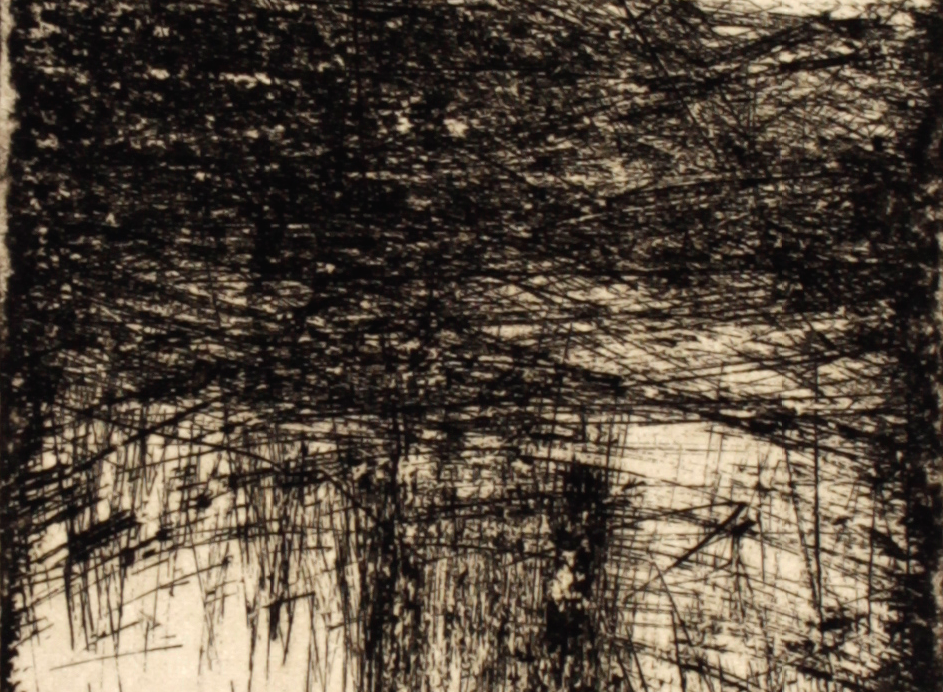 An exhibition of etchings by Elaine Foster-Gandey

Accompanied by talks & workshops exploring mark making and connections to drawing, process, materials, performance and print making in relation to health and well-being.

“Developing ideas around movement and collaboration, I have concentrated my work on the mark, the mark made by the collaboration with others as well as the connection with surface, body to ground, arm to floor, leg to floorboards, heart to the earth.

In the piece ‘Come and dance with me’ I invited four performers to move with me and filmed the collaborations and my responses (Carlos Ara, Belinda Papavasiliou, Louella Forest & Liz Aggiss). This work was a highly kinesthetic piece focusing on how two people can have influence on each other, an invisible connection that becomes visible through the medium of film and we can see the marks we make on each other.

The artifacts from the film, the mask, the costume, the book and the camera were the only physical evidence left apart from the film and the plates. The costume and the mask held the memory of the encounters and through using them stimulated the mark making process. I wanted to see how I could capture the elements of mark making, so I made ‘movement maps’ by strapping etching plates to my body.

I have been interested in ideas around permanence and impermanence and how an ephemeral physical body can make a permanent mark through the process of mark making. Inspiration came from an archaeological source, images found of hand stencils that were discovered in the cave’s of El Castillo in Spain made some 35,000 years ago, the earliest known marks made by humans.

The etching plates, like pattern pieces for clothing, were chosen for their size and wearability. Once strapped to the body the movement was limited.  The stomach arm and leg plates were the most uncomfortable and limited the amount of movement I could make.

Choosing gold, which is an untarnishable metal, emphasizes the marks that were made on the plates when etched and their permanence in the here and now.”

Elaine Foster-Gandey is a local Artist. Her work takes on a number of different forms including performance, installation, textiles, sculpture, painting and print. Her many years of professional involvement with the Fashion industry, combined with her interest in mask and costume, provide a rich visual resource that informs all her practice. Elaine’s longstanding interest in identity and gender issues provide much of her work’s theoretical underpinning.

In 2014 her painting, ‘Two girls in masks’ was chosen for the RA Summer show and featured on the BBC arts programme online where Tracey Emin selected it as one of her favourite works on show. In 2009 Elaine organized the groundbreaking ‘Real people catwalk show’ at the ICA in London which challenged norms in the fashion business by showing people of size, age, ethnicity, gender, and physical ability on the catwalk. The show sparked media attention looking at these issues.

Recently graduating from the University of Brighton on the MA Inclusive arts course, Elaine set up a research project at the Phoenix arts studios working with the Rocket Artists and BA fine art students exploring ideas around movement, mark making and textiles. The resulting work was shown at the ONCA gallery last year.