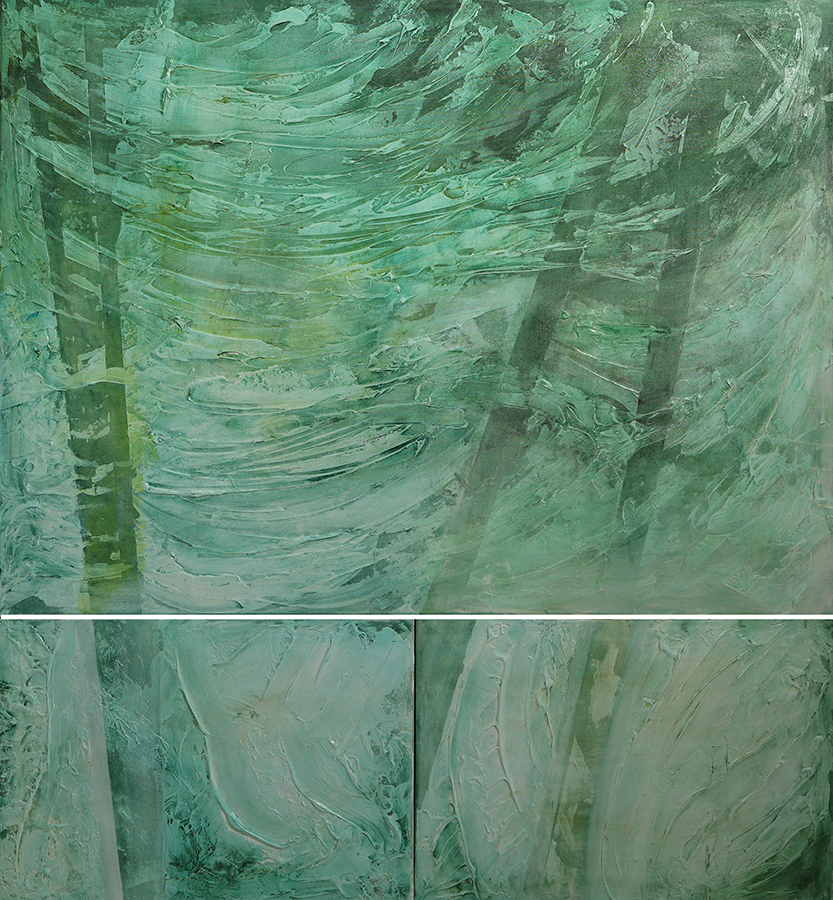 ONCA is pleased to present Sullied Seas Mary Eighteen’s first solo show, featuring large scale paintings from four series of work inspired by marine pollution and ocean conservation research. Images from the National Oceanography Centre will also be on display alongside the canvases.

Mary Eighteen is an abstract painter based in the south of England. She studied fine art at Leeds University and from 1997-1999 completed an MA in Visual Theories at the University of East London. The notion of theory juxtaposed with studio practice continues to be central to her work, and is inspired in particular by Abjection, the writings of Julia Kristeva and artist Anselm Kiefer.

“Human responsibility and its relation to maritime concerns are central to my work. Interrogating this notion in respect of mankind, my work is aligned with the embodiment of two elements – that which lies beneath the surface and the banality of the unthinking. The banality of the unthinking (or thoughtlessness) is an every day contemporary subterfuge that lends itself to the unraveling of human involved activities that prompt questions about responsibility.  The initial idea for a collection of paintings was inspired by the plight of the James River Ghost Fleet, a decommissioned and highly toxic group of ex naval ships, (the Mothball Fleet),  stationed  in Virginia. The pollutants embedded in the ships, posit maritime concerns within the realms of oceanography, forming a symbiosis with climate change. Such pollutants are a catalyst  for the carbon dioxide dilemma, acidification and the ecological threat to our seas.”

The paintings unfold via a process of layering – the base layer when dry has several further layers added until the paint itself dictates a final outcome. It is a give and take process wherein an initial starting point may change according to the process of manipulating the paint. The work is a juxtaposition between an environmental response, and a process driven enquiry. Her paintings are a metaphor for change. They allude to an opposition to ecological purity and human endeavour, by presenting an oceanic world devoid of tenacity or social concern. They acknowledge an indulgence in nature’s richness while at the same time destroying this possibility through thoughtlessness and banality. 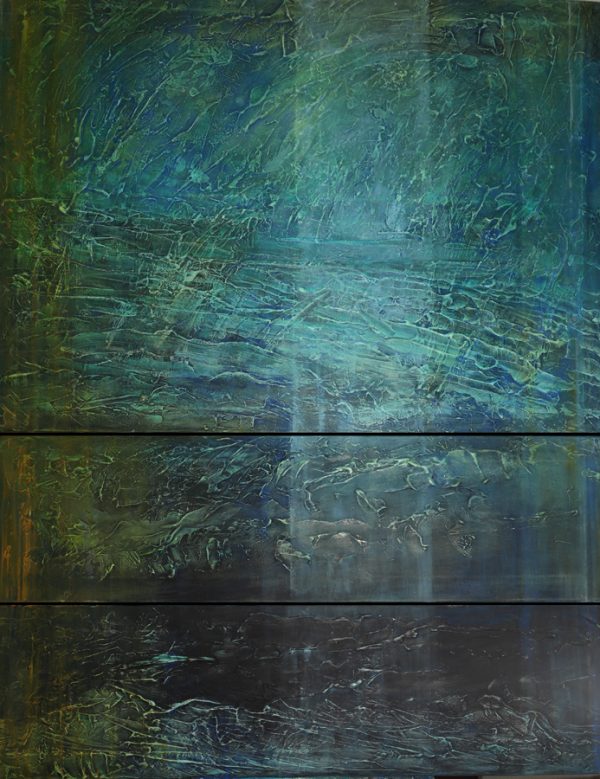 Looking for something fun and creative to do during half term? Be inspired by Mary Eighteen’s large abstract paintings and microscopic images of the ocean during these informal drawing sessions. Suitable for ages 5+, materials and refreshments provided.

As part of Brighton Science Festival, Creative Bloom, Mary Eighteen and ONCA invite you to join forces and clean up Brighton beach. We’ll collect everything we can find in an hour and then bring it back to the gallery to sort and discuss. Meet at the gallery to walk down to the beach together. Collecting gear, protective gloves plus hot drinks and biscuits provided. Family friendly, suitable for all ages.

Mary Eighteen and Prof Martin Solan from the National Oceanography Centre (NOC) provide further insight into their research and ongoing collaboration. The NOC’s mission is to be amongst the world’s top oceanographic research institutions and make sense of changing seas, upon which future human wealth and well-being depends.

Prof Martin Solan is a Professor in Marine Ecology within Ocean and Earth Science, National Oceanography Centre Southampton at the University of Southampton. A marine benthic ecologist with broad interests in understanding biodiversity-environment interactions and the ecosystem consequences of altered diversity and environmental change. He champions strategic and applied interdisciplinary research in benthic habitats, from coastal to full ocean depth and across environmental gradients.