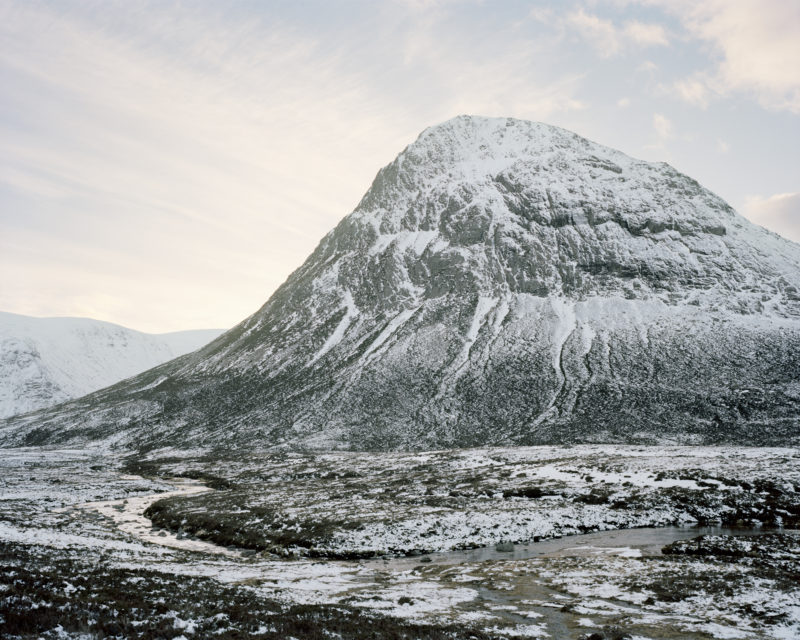 ‘Wooded Heights’ focuses on the landscape of the Ancient Caledonian Forest and Grampian Mountains of the Cairngorms National Park in Scotland.

Explored over the course of three winters, the series is a look into the wildest and most endangered habitat in the UK. Only 1% of native woodland now remains in the Cairngorms. Pockets exist in isolation from one another, resulting in a fragmented landscape, which is home to some of the country’s rarest wildlife.

Its future hangs in the balance of a newly funded rewilding initiative called Cairngorms Connect, delivered by the Endangered Landscapes Programme. The aim is to fulfil the potential of the landscape by restoring its former ecology, creating a new standard for habitat restoration in Britain.

A change in attitudes towards how land is managed is emerging, with habitats being allowed to expand back into their former ranges. This realisation of the growing importance of protecting wild spaces offers hope for their future existence in the face of current issues like climate change and biodiversity loss.

This series ‘Wooded Heights’ aims to show the true value of this ecosystem with an emphasis on why the preservation of remaining wild spaces is so vital.

Luke’s photography exhibition in the main gallery is accompanied by Max Smith’s video ‘A Sense of Place #2: The Cairngorms’ showing in the basement gallery.

The Cairngorm Plateau, a sub-arctic habitat stretching across the highest peaks of the Cairngorms National Park, is the best preserved example of wilderness in the British Isles. Never exploited by humans for agriculture or development, the same plant and animal species have inhabited this landscape since the retreat of the glaciers at the end of the last Ice Age.

The domed caps of the mountains provide a home for several species uniquely adapted to a life in these frigid conditions. The snow hare and ptarmigan turn white in the winter months, disguising themselves against the snow to avoid predation from eagles. Further down the slopes, re-introduced reindeer stoically dig through feet of snow to reach their grazing, whilst snow bunting pick off insects that have strayed too far up the mountain from the sheltered woods below.

Despite the longevity of this ecosystem, human-made pressures have now arrived in the Cairngorms. The changing climate is gradually shrinking the arctic habitat, and snowless winters leave species that turn white vulnerable to predation. The overall population of snow hare in Scotland has collapsed, down to 10% of their former numbers. Even the apex golden eagles are suffering: persecuted by shooting estates across swathes of the country, their populations are fragile, and a reduction in the numbers of snow hare puts further pressure on this iconic predator.

The Sense of Place film takes place on the frozen plateau of the Cairngorms National Park in the Highlands of Scotland. The film takes viewers into this frigid world, where boulder fields ring with the strange call of the ptarmigan, reindeer dig for food in the frozen ground, and snow hare hide from golden eagles soaring above.

Luke Brown is a British photographer, based in Brighton, UK. His photography focuses on the landscape, exploring the impact of modern society, referencing history and tradition, highlighting examples of how humans can coincide with the world’s natural beauty without destroying it. Luke’s practice currently revolves around the pursuit of long-term, research driven projects, in which the work created reveals an interest in our relationship with nature and the wild.

Luke’s most recent series ‘Wooded Heights’ documents the Cairngorms National Park, Scotland. The series aims to show the true value of this landscape, with a focus on the importance of protecting wild spaces.

Max Smith is a Cinematographer based in Bristol. His work is inextricably linked to the topics of wildlife and wilderness, specifically in the context of the United Kingdom. His films aim to transport viewers into the last wild spaces found here, and convey not only the beauty of these landscapes, but the intrinsic value that these areas possess.

The ability of Wild landscapes to affect those who spend time in them has been well documented, and cannot be overstated. But in an era where the natural world has fewer and fewer places to hide, and our lifestyles move ever further from nature, creating pieces that draw us back to a bigger, simpler and stiller existence is more pertinent than ever – and at the heart of Max’s work.