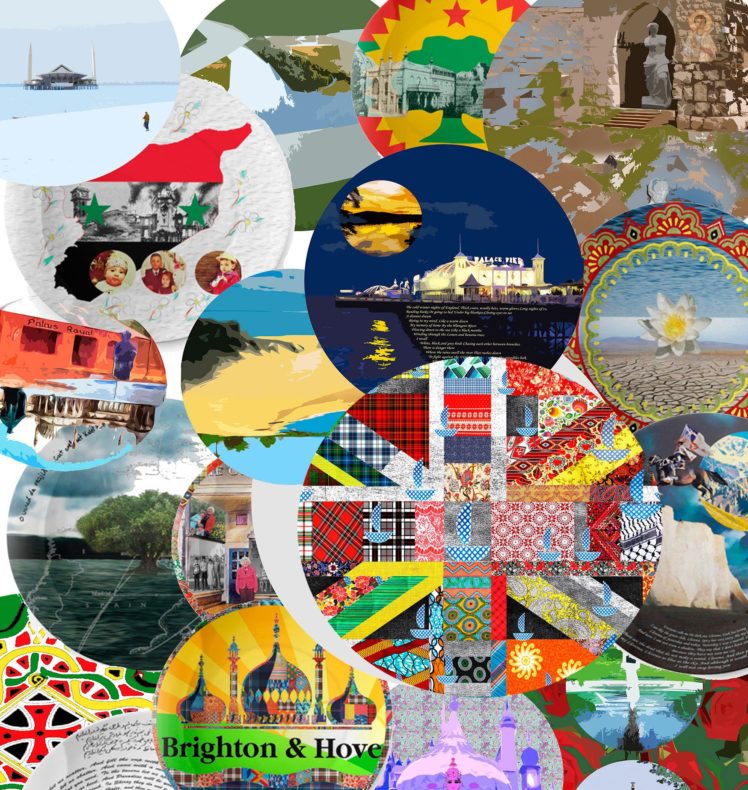 In The New Babylonians Gil Mualem-Doron presents several socially engaged art projects, some of which were exhibited previously at the Tate Modern, Liverpool Museum and the Turner Contemporary.

The exhibition presents a complex and challenging participatory project on the theme of belonging, memory, place and identity that has resulted in captivating art that captures the spirit of our times and this great city. This city is New Babylon, not exactly the fantastical playground that was envisaged by the Dutch artist Constant Nieuwenhuys in the late sixties, nor the city in which a tower is built, tall enough to reach heaven. The New Babylonians are the people of a town that, as William Morris envisioned, is nowhere, yet the foundations of that city can be seen everywhere, if you just care to look. 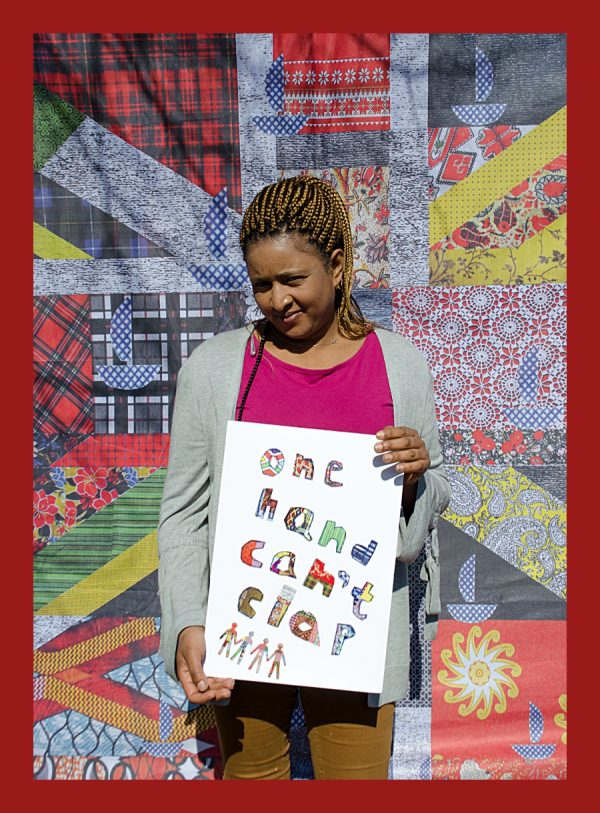 At the heart of the exhibition is a large room  installation – “Mesubim” (meaning in Hebrew ‘to go around’ as well as ‘sit at a dining table’). The installation comprises of a series of hand drawn and digital collages printed on porcelain plates and a recording of conversations with the participants. The work is based on a six-month participatory art workshop with a group of refugee members of the English Migrant Project who meet once a week to learn English and eat a home-cooked meal together.  The collages were created through conversations and online searches for images of places from where they came, juxtaposing them with places in Brighton, where they currently live.

The second project in the exhibition is ‘The New Union Flag project’ – a proposal for a new flag for the UK that reflects on the UK’s colonial past and celebrates the country’s cultural diversity. Beginning at the end of 2014, a few months before Brexit, ‘The New Union Flag project’ has been touring the country and engaged with ten of thousands of people, among them Labour Leader Jeremy Corbin, through workshops in schools and museums, photo shoots, exhibitions, street interventions and demonstrations. The project has won the support of Art Council England and Counterpoints Arts. The exhibition will present a short history of the project and a short film made by Marcia Chandra about the project during its exhibition at Tate Modern in 2017.

In ONCA’s lower basement gallery, Mualem-Doron will exhibit his new participatory project ‘Protesting For Diversity’. ‘Protesting For Diversity’ is an online campaign for cultural diversity, created collectively by various groups in the UK through art workshops, photo shoots and rallies. The project is a response to the huge rise in hate crimes in the UK post Brexit, the rampant xenophobia in the mainstream media, and the derision politicians level at the importance of cultural diversity.  As part of the exhibition, visitors are invited on Saturday, 23 June to participate in a placard-making workshop. The placards will be taken on 24 June for a ‘Refugees are Welcome’ parade in Brighton, organized by Hummingbird Project and for a photo-shoot at the Together event at the Dome.

Gil Mualem Doron‘s works have been exhibited in galleries and museums in the UK, Europe and the Middle East, in magazines and books, in public spaces and in community and cultural institutes in Israel and Europe. He has been awarded artist-in-the-community scholarships, the Henri Ford Conservation Award, and grants from the Arts Council of Great Britain. Gil founded Brighton’s SEAS – Socially Engaged Art Salon. His work is multidisciplinary, socially engaged, activist and political, and combines research on art, architecture and urban culture. Gil’s artistic activities integrate various media, from drawing and photography to installations and performances, but they also include such trivial acts as walking, eating, demonstrating, burning, guiding, conversing, collecting garbage and donating blood. He has created participatory and collaborative works with various disaffected communities, among them Palestinian youths, immigrants and homeless people. His work from 2000-2013 forms the basis of the book “Mind the Gap – Transgressive Art & Social Practices” (2014).

“Gil Doron is one of those brave truth tellers who sees the inequities in daily life and highlights them through his art, which is neither didactic nor simple-minded. As this book makes clear, he is a fearless magician who translates ideas and ethics into art objects, social practices and spatial actions”.

“Mualem-Doron’s engaging and provocative body of work is elegantly catalogued here, offering the reader a deeper understanding of what it means to subvert in an oppressive situation. He is a trickster, creating community dialog and participation, while serving up invisible and often difficult histories to the casual passer-by or gallery visitor. Thank goodness for this edgy artist, pushing against the status quo in such a compelling way.”

– Beverly Naidus, the author of Arts for Change: Teaching Outside the Frame