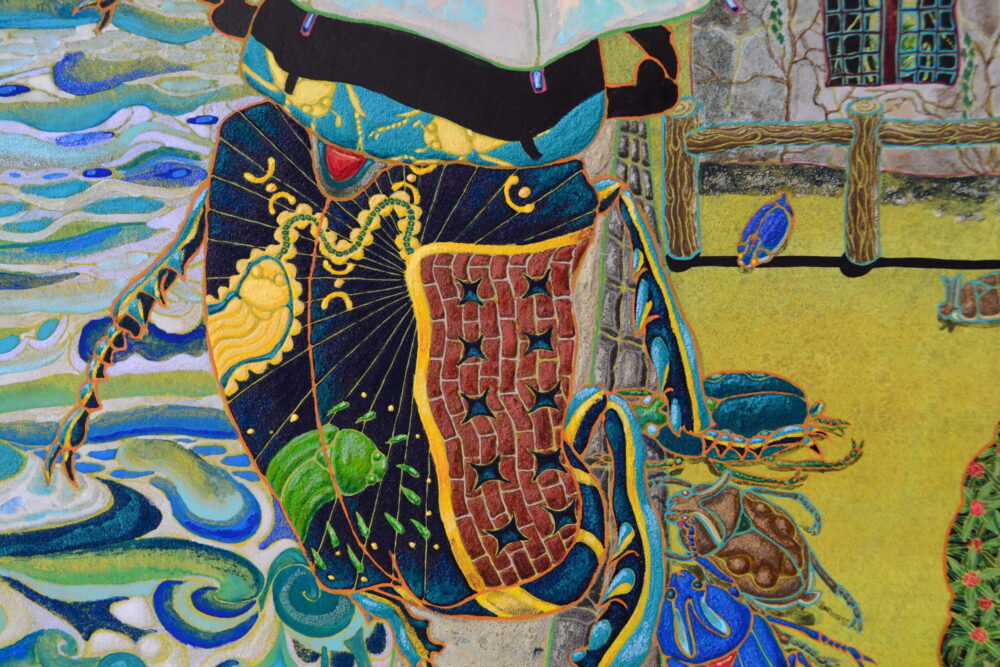 “All my works have a common theme: summer.”

“For me, as someone who is conscious of summer throughout the year, I can feel the summer that remains in the corner of everyday life even in the coldest season. I draw the work by capturing the summer that exists in everything. There are things that I use to draw summer: beetles, stag beetles and drone beetles that are symbolic of summer. I borrow their form and portray this world as a kind of summer language.”

Tokonatu Colour (Tokonatu meaning ‘everlasting summer’) is Abiru Katunori’s first exhibition outside Japan. Originally scheduled for April 2020 but postponed due to the Coronavirus outbreak, we are delighted to exhibit a small selection of paintings in our gallery window and online.

Abiru Katunori is a Japanese painter who was born and lives in Tokyo. He has been interested in small creatures since childhood, inspired by the mysterious appearance of insects. The summer in Japan has high humidity; Abiru feels emotions in the humidity and is fascinated by the power of the air in the summer. He admires the nature of a place a little to the east of Tokyo where he grew up. He painted many Japanese paintings during his art school days, and his unique worldview has been recognised as particularly individual, even by Japanese people with the same view of nature and death. Abiru’s works include his emotions, memories of his family, and are reminiscent of his journeys through the summer observing insects in Japan.

In the world where digital media and digital tools are dominant, Abiru’s work looks for new expressions through the traditional hand-drawn lineage of Japanese painting using brush and rock paint. It tries to express the potential of opening new doors for the Japanese people and Japanese culture in the future. His work depicts many aspects of Japan, such as buildings, urban spaces, and scenery. The bird’s-eye view of the compositions can be seen as a scroll depicting modern day Japan. He continues to create paintings that condense the aesthetics he wants to preserve in the future of Japan.