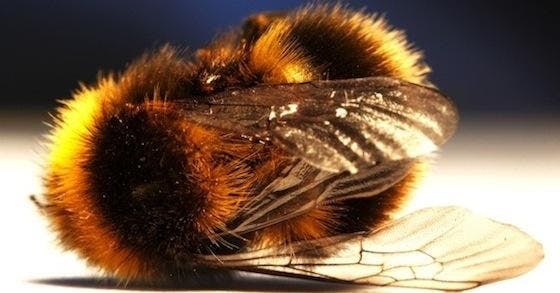 Although most of us live in towns and cities, what goes on in the countryside affects us all, because around 70% of Britain is farmland. UK farming produces 60% of our food – food production is our biggest manufacturing industry, employing nearly 4 million people.

A sustainable food industry is vital for our economy and our food security. Yet independent scientific research shows that intensive agriculture is damaging the very things it needs to operate – environmental services such as pollination. There is mounting evidence worldwide that a group of pesticides called neonicotinoids are causing pollinators to decline. The European Commission has banned the use of neonics on flowering crops in Europe until December 2015. The UK Government did not vote for the ban, citing lack of evidence that neonics harm bees.

Led by Professor Goulson, scientists at the University of Sussex are carrying out groundbreaking research into the effects of neonics.  But the evidence they and other scientists have found puts them at odds with the National Farmers Union, the Government and the agro-chemical industry, who all say that there is insufficient evidence that neonics are a threat, and that Britain will lose millions of pounds through crop failures and thousands of jobs in farming if the ban continues.

So what is the public supposed to make of it all?

Please help us to debate the issues.

Who are the scientists involved?

Why is the Government not satisfied with the evidence?

What do local farmers think, and who advises them?

What is happening to the land on and around farms near Brighton?

We will also hear from Nick Mole of event co-host PAN-UK about PAN’s campaign to make Brighton the UK’s first pesticide-free city, and meet Grub n Mushroom, two artists cycling around Sussex on a tandem, having conversations about neonicotinoids with local food producers.

This event is co-hosted by Pale Blue Dot, Onca Centre for Arts and Ecology, and Pesticide Action Network (PAN-UK).