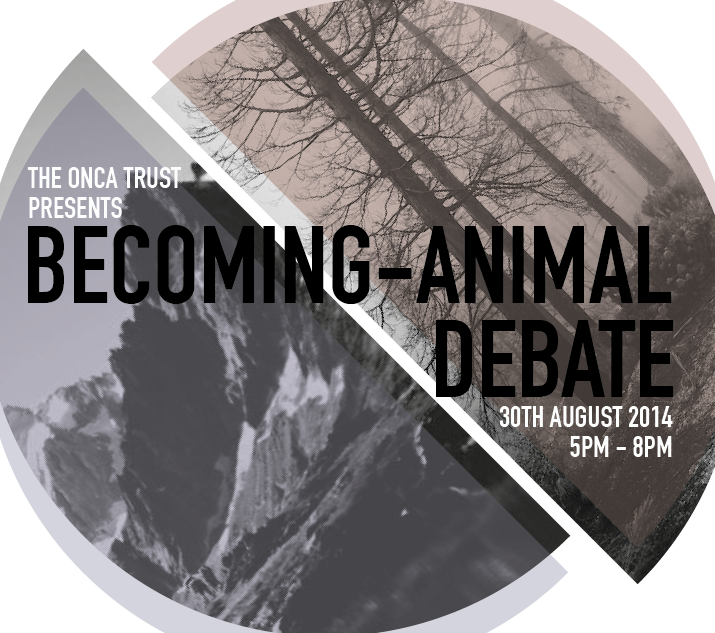 What is the role of becoming-animal in promoting ecological activity?

Is a change of shape needed to change our ways of being?

From myth, fairy tale and popular fiction, shape-shifting, or becoming-animal, is a resonant image in art and imagination. Yet can traditional stories and fantastical images, which set fluid boundaries between human and animal, be of relevance to negotiating deepening ecological perceptions of our presence and impact on the planet?

As part of our becoming-animal exhibition Exile: A Living of Forest, ONCA presents an interdisciplinary and interactive debate about the relationship between fantastical stories and ecological activity. The evening will include performances from acclaimed eco-poet Susan Richardson, storyteller Lisa Schneidau and award winning nature writer Eleanor O Hanlon, who will then join the panel discussion alongside artist Rosemarie McGoldrick, psychologist Adrian Harris, and writer Joanna Coleman. The debate will be chaired by artist Alan Boldon, expert in interdisciplinary approaches to art and ecology.

The audience will be invited both to join in the dialogue, and to respond creatively to the debate, selected writings of which will be published in an upcoming ONCA anthology.

Alan Boldon has spent many years working on interdisciplinary projects as an artist, curator and project manager. He has an MA in Psychological Aesthetics and has taught Fine Art, Socially contextualised arts practices, public art and psychological aesthetics at BA and MA level including lecturing throughout Europe the USA and Canada. In 2009 he was made an Honorary Fellow of Winchester School of Art for his work in pushing the boundaries of arts practice. He is also Artist/Fellow in the Faculty of Engineering at Bristol University, an active fellow of the RSA and Academician of the Academy of Urbanism. He joined the University of Brighton Faculty of Arts in 2012 as Deputy Head of School for Research, Economic and Social Engagement.

Rosemarie McGoldrick is a London-based sculptor and installation artist who has shown nationally and internationally. She trained at Middlesex, Chelsea and Goldsmiths, has taught Fine Art at the CASS since 1995 and is now Course Leader for BA Fine Art. She has curated and made artefacts for two major exhibition-and-symposium events: The Animal Gaze (2008) which toured London, Plymouth, Exeter and Sheffield and The Animal Gaze Returned (2011).

Susan Richardson is a poet, performer and educator specialising in wildlife, conservation and environmental themes, with two published collections, Creatures of the Intertidal Zone and Where the Air is Rarefied, from Cinnamon Press. Her third collection, skindancing, themed around human-animal metamorphosis and our dys/functional relationship with the wild will be published in 2015. Susan runs ecopoetry workshops for a wide range of organisations including WWF and Friends of the Earth.

Eleanor O’Hanlon has carried out field research for leading international conservation and wildlife organizations around the world. Her articles on wildlife, wilderness, animal behaviour and conservation have appeared in magazines such as BBC Wildlife, Geo, Animan in France and Switzerland and Nature’s Best in the US. Her first book, Eyes of the Wild, was awarded the 2014 Nautilus Gold Book Award for Nature Writing.

Adrian Harris is a psychotherapist and researcher who has been engaged in environmental activism for most of his life. His PhD thesis explored embodied knowing in Eco-Paganism and his MSc researched psychotherapy in nature. He has published work on sacred ecology, animism, ecopsychology and the power of place. Adrian occasionally facilitates nature connection workshops and regularly considers the relationship between body-mind and place in his blog: www.bodymindplace.org

Lisa Schneidau is an ecologist with 20 years of experience in working within the voluntary nature conservation sector in the UK, on species and habitat conservation, policy, management and leadership. She currently leads a major landscape-scale conservation project in north Devon, working with Devon Wildlife Trust and a broad project partnership. Lisa is also a storyteller specialising in stories about wildlife, nature and the land. She has a particular interest in using story to help rediscover our sense of wonder in the natural world.

ONCA’s writer-in-residence Joanna Coleman is an eco-poet who specializes in exploring voices of the wild. She has performed both nationally and internationally, at venues from ancient woodlands to university campuses. Joanna is completing a PhD on becoming-animal and ecology at the University of Chichester. Her research involves the development of the Becoming-Animal project, a primary school programme which uses animal transformation fairy tales to allow young people to explore their relationship to our changing environment.