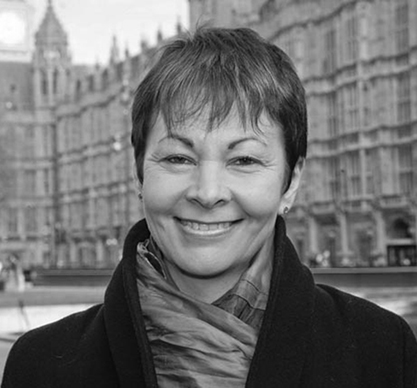 “I’m very proud that Brighton is home to ONCA, a unique and inspiring gallery that acts both as a showcase for our relationship with the natural world, and as a spur to protecting and enhancing it. The arts have a vital role to play in encouraging more people to care for our environment, and to take action to defend it. At a time of increasing environmental destruction, we need to reach the hearts and minds of as many people as we can with a positive message that urgent change is possible and desirable.”

Caroline Lucas is Member of Parliament for Brighton Pavilion and served as leader of the Green Party of England and Wales from 2008 to 2012. In 1999, she was elected as one of the Party’s first MEPs and represented the South East region until the 2010 general election, when she was elected to serve the people of Brighton Pavilion as the first Green MP. A passionate campaigner across a broad range of issues, Caroline is Vice President of Stop the War Coalition and the RSPCA, a CND National Council Member, a Director of the International Forum on Globalization, a Matron of the Women’s Environmental Network, and a Patron of Action for UN Renewal and the Martlets Hospice. Caroline is married with two sons and lives in Brighton.