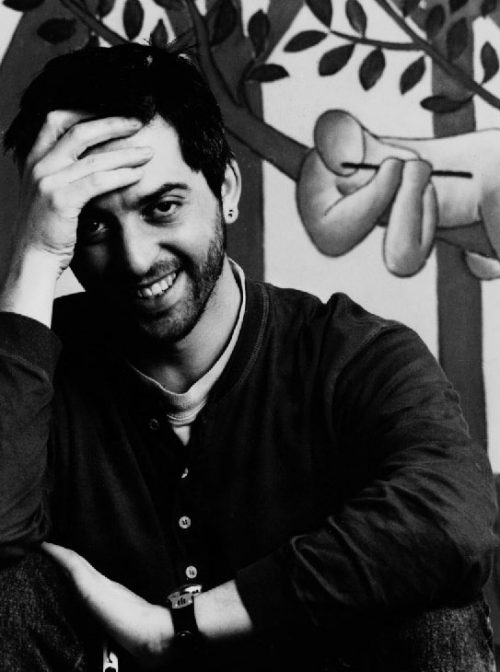 Michele Angelo Petrone was a professional artist who exhibited at the Royal Academy and the South Bank in London.

His work is included in the BP Young Europeans Collection in Brussels and in public and private collections across the world. He received a Medal of Distinction from The Glogow Museum in Poland. In 2004 he won the Blair Sadler Award from the Society for the Arts in Healthcare in Washington DC, USA, for his ground-breaking work with people affected by cancer.

At the age of 30, Michele was diagnosed with Hodgkin’s Disease. He said that nothing had prepared him for the pain, difficulty and fear which followed this diagnosis or for the many years of treatment after periods of remission and relapse, which included high dose chemotherapy and stem cell transplantations.

As he lay in isolation in his hospital room, he used his skills as an artist to express the feelings engulfing him. The watercolours and gouaches, painted initially to decorate his hospital door, were the start of depicting the emotional events of his journey through illness and recovery.

These paintings were subsequently shown at the Wigmore Hall in London, under the title Between Night and Day – Michele’s metaphor for his journey. His work first came to the attention of healthcare professionals in 1996 when he gave an extraordinary presentation of his paintings, with accompanying prose, at the CancerBACUP’s 10th anniversary conference in Brighton. It moved many of his audience to tears.

As a result of this presentation, he was invited to exhibit his paintings at a number of Sussex venues in 1997, under the title The Emotional Cancer Journey, which was also published as a book.

The response to these exhibitions was dramatic and led to the work being used by health organisations and medical institutions across the UK and beyond.

A residency at St Peter and St James’ Hospice, East Sussex, helped patients and carers to “colour their feelings” through paint. The resulting exhibition, Touching the Rainbow, was also published in book form in 1999. A year later he extended the work to health professionals across the UK. Moving Pictures gave them the chance to paint their feelings about caring for patients with life-threatening illness.

In 2002, Michele set up the MAP Foundation, an arts in health organisation promoting expression, communication and understanding for people affected by life threatening illness, in particular cancer.  Over the years, Michele used his skills to express not only his own feelings but to help others find creative expression for their feelings about living with, or caring for people living with cancer.

After Michele’s death in 2007, the charity was renamed the Michele Angelo Petrone Foundation in recognition of Michele’s legacy.  Art was the centre of Michele’s universe and through his work with thousands of cancer patients, carers and families he allowed them also to experience the power of art when dealing with difficult life events. Michele’s exhibitions, books, workshops and talks helped to create a bridge between medical treatment and the human experience.

Since 2015 ONCA has been responsible for part of the MAP collection, with other elements being held at the Wellcome Library in London. If you are interested in finding out more about Michele and his legacy, or to enquire about borrowing or buying pieces please do get in touch.

We sometimes run workshops inspired by the work of Michele. We update our blog here with project news. If you require any further information please email .