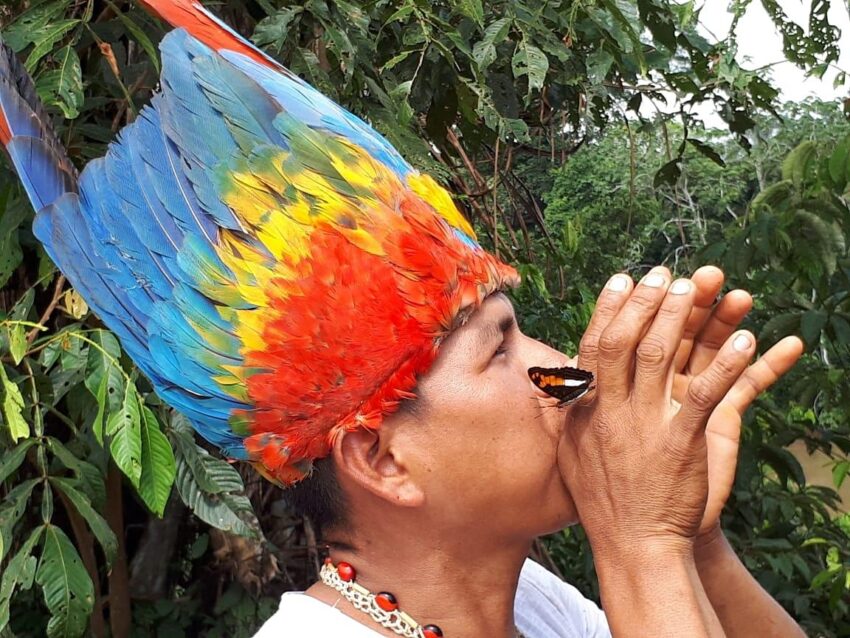 Listening to the cosmovision of the Kichwa Kawsak Sacha

While I write, I am faintly aware of the background noises around me. Cars passing by, an ambulance, a dog barking, a radio, the raucous sound of a magpie at the park nearby, a plane, the incessant calls of seagulls, the thunderous workings of a garbage truck, scaffolding being put up, a territorial family of crows, someone drilling the pavement outside.

Within the confined but comfortable space of my flat, I feel shielded and isolated from the rest of the world. The more digitally connected I feel, the more disconnected I am from the material, palpable reality that surrounds me. If COP26 reinforced my feelings that the dissociative disorder of the Western world is reaching a point of no return, last week’s event hosted by ONCA about the Pueblo Ancestral Kichwa Kawsak Sacha (PAKKS) arguably incarnated one of the lights at the end of the tunnel of climate crisis. This ancestral people invite us, at a material as well as spiritual level, to change the way we perceive and relate to the world of which we are a part.

The event was part of the ESRC Festival of Social Science and it was a co-production between Sussex Humanities Lab, Experimental Ecologies initiative, and ONCA. It was the world premiere of the film “Sacha Taki” (Songs of the Forest), directed by Gus Chiriboga, also showcasing illustrations by Sozapato (Sofia Zapata Ochoa). These were created through an action research project funded by Sussex Sustainability Research Programme‘s Global Challenges Research Fund. One of Sozapato’s illustrations can be found on the website of the Sacha Warmi Foundation, which works to strengthen and revitalise traditional systems in the Ecuadorian Amazon. Along with Chiriboga and Sozapato, the event also included Paola Moscoso, Independent Researcher, Alice Eldridge, Reader in Sonic Systems at the University of Sussex, Paccha Turner Chuji, Translator, and Pastor Inmunda, President of the PAKKS Communities.

For the PAKKS, the forest is a living entity which integrates all beings: humans, animals, plants, elements. In this sense, “Sacha Taki” is all of the living sounds that can be heard in the Amazon. The wind, the water, the rain, animal sounds, the sounds of the forest spirits, the songs of the people. They live in the lower basin of the Curaray River, bordering with Peru, in the province of Pastaza. The territory’s rich biodiversity is not only attributed to the implementation of the Territory Management Plan, but also to the ancestral knowledge of the human relationship with the non-human. Through the combination of human and non-human songs, the PAKKS integrate the forest’s web of life. For instance, different types of songbird can convey information about the weather or warn about possible dangers in the forest, but they can also affect the ancestral people on a personal level, in the form of an omen or even as a sign of potential infidelity. Similarly, the cries of howler monkeys can be notifications on the daily weather, warnings about the nearby presence of jaguars or predictors of someone’s impending profound sadness, such as the death of a loved one.

Additionally, the relationship between human and non-human sounds indicates the timeless cosmovision of the PAKKS. By communicating with the non-human, the PAKKS also communicate at a transcendental plane, with the forest spirits or supay, also known as “owners” or guardians of the animals, plants, and the elements. The PAKKS understand that the ant, the wind, the river, the tree, the boa, and the jaguar are beings with spirit, with whom they share the forest and their daily lives. By interweaving human and non-human communication, the relationship between the PAKKS, non-human beings and the supay spirits lays the foundations of “Sumak Allpa”, a land without evil:

“It is through these songs that we communicate with the forest and its guardian spirits, to call the animals of the forest or the fish of the river, to invoke or propitiate the fertility of the gardens, to cure illnesses and diseases, to bring tranquillity to families, to remember and transmit the teachings left by our ancestors, to live well together. They are like pathways and bridges that reconnect us with our history and our origins. The living beings of the jungle also have their own way of expressing the life that manifests itself through them. Their songs and ours celebrate life. The ensemble of songs that can be heard in is a symphony which took thousands of years to write. It is a unique and priceless creation, which we cannot let be destroyed or disappear.”

While the forest spirits communicate with the PAKKS through sound during the day, they populate their dreams by night, appearing in human form to inform humans of the will of the forest and the need to care for it, to relay premonitions, to grant powers or special skills (called paju) such as cultivation and healing, as well as to establish pacts of mutual care. The extra-material significance of the PAKKS relationship to the forest means that there is a deeper connection between them and the reality they inhabit. Such a connection cannot be easily severed, even though the mindset which governs actions such as deforestation, mining and exploitation of lands and peoples represents a terrible threat to this way of life.

Effectively listening to the cosmovision of the PAKKS is realising that our relationship with the world cannot stop at a material level, but must also happen in the spiritual dimension, so that we will be able to understand our intricate connections with all other beings and achieve a cosmological awareness of reality. The more we resist this change in awareness, the more we will feel disconnected from the reality that really matters.