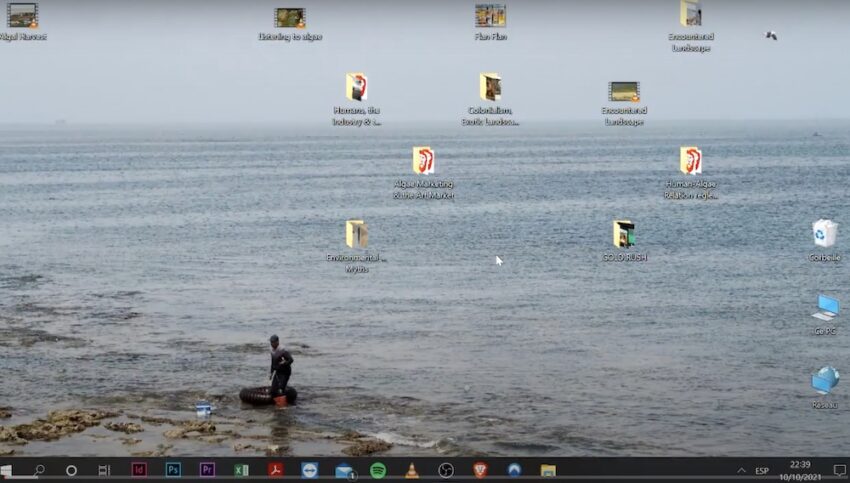 A desktop decluttering from the shores of El Jadida.

Film by Elodie Sacher, and transcript

El Jadida.
Feels strange to be here.
Actually, nobody collects seaweed.
The shoreline is dotted by inhabitants of the city.

People taking a rest under sun umbrellas after a swim.
Some men fishing in inflatable boats.
Children climbing on scaffolds installed in the sea.
A woman with sif hayati cleaning and scaling sardines.

And the two of us. Younes and me
Why are we here?
Are we trying to trace back RED GOLD to its algal existence as gelidium sesquipedale?
Are we looking out for RED GOLD in order to grasp the socio-economic network of seasonal collectors, local intermediaries and international buyers?

From the 1990s to the 2000s, the international hungry crowd grazed the natural stock of sea cucumbers and red algae nearly down to its extinction.
We don’t encounter the awaited crowd of women and children picking up the red algae from the beach and neither the men diving each year deeper for the underwater forest. People say that the price for a kg of red algae is too low. Not worth taking on the harsh physical work at the rocky shores.

The inhabitants of Morocco’s Atlantic coast established during the last years an economic relationship with seaweed.
Some seaweed species are useless for them, others not.
Some red algae are “fake”, others not.However, we are standing at El Jadida’s beach.Right beside the Portuguese citadel.
We feel part of this landscape. And observe the movements on its surface.
Ocean and land are linked to each other by people interacting with the marine environment.
We sense that we have no special interest in RED GOLD as such, but rather try to apprehend this landscape marked by the absence and presence of certain actors.But to be honest, our research started not right on site but via Google search.
The clicking and typing nourished the research.
Lately, I found the information level I reached, and the archives I entered dispersed on my homescreen.
This is actually the first document I saved on my desktop.
It shows supermarket products containing E406.
A code of letters and numbers indicating the presence of Agar-Agar in products.
At Marjane, we discovered all sorts of puddings and cream cheese with this vegan gelatine substitute extracted from the precious red alga.
Younes, especially remembers Flan Japan from his childhood.
Ironically, Japan is nowadays one of Morocco’s most important clients buying agar-agar and packaged algae.Leaving the supermarket, I started to wonder about the origins of algae harvesting in Morocco.
Stories tell us that a Moroccan Jew was the first to be interested in the flood of red algae.
But as it turns out, it was a French named Dali Grand, which grasped fully the economic value of Morocco’s red natural resource in 1950.A kind of familiar narrative. A Western foreigner has to get things started.
The narrator tells the spectator in a paternalistic tone about the universal character of the sea, its movement and its perceived infinity.
Quickly, he gets to his point of interest, the economic exploitation of the Atlantic’s silver treasure.
Straightforward, he continues to refer to France’s involvement in the enterprise to elevate the artisan profession of fishing to an industrial level by the means of natural sciences.
The rationality and objectivity of natural sciences are stressed.
The economic value of natural resources and their proper exploitation could only be recognised and evaluated justly by the French administration and its affiliated researchers.

From the fishing to the algae industry, the French reached for Morocco’s natural treasures.
And even before the actual colonisation in 1912, French explorers dreamed of the unknown Sharifian Empire and its exotic creatures.
Such as the Barbary lion painted several times by Delacroix and hunted down to its extinction by the French.
Later on, other myths emerged, which led to economic reforms provoking environmental disasters.
“French developers considered the Gharb potentially one of the great river-valley gardens of the world  – the ancient “granary of Rome” – that lacked only the guiding hand of French technology and administration.”
The myth of the Granary informed and gave at the same time meaning to the reform program of the French administration.

Adam Guerin speaks here of the interdependence of natural and built ecologies.
Which kind of narratives nourish the environmental and socio-economic landscape of El Jadida?
Since the 2000s, multiple media channels have announced the natural resources’ golden hour.
The media navigated literally into a gold rush.

Gold in all kinds of colours is praised.
From green gold like argan oil and avocados to red gold like safran and seaweed.
Resources enriching the health of individuals and Morocco’s GDP.
And after all, algae are an organic and renewable resource.
An ever growing biomass, which is fast enough to catch up with its exploitation.
Apparently not.

Already in 1954, the French Director of Commerce and Maritime Goods decreed an order to regulate the collecting of gelidium sesquipedale within the Sharifian Empire.
And nowadays?
In 2010, the Moroccan Ministry of Agriculture & Aquaculture decreed rules in reaction to the significant decrease of the natural stock of the precious red alga.
Harvesting seasons, working licences and an  export quota are announced as game changers.
In 2021, the red oceanic forest recovered partly, but the seasonal workers didn’t gain any additional benefits  from the regulation of the sector. The working conditions didn’t improve and the remuneration dropped.Meanwhile, in 2020, exhibitions like “Seaweed Future: Red Gold” coined terms like “sustainable seaweed future” and “biomutualism”.
After making bioplastic out of seaweed, the upcoming project of the “Seaweed appreciation society” proposes that urban residents and seaweed species engage with each other through bodily contact in mobile swimming pool-bubbles.
A new narrative around algae emerges from the art scene.

Colonial actors, researchers, the media, the Moroccan state and artists brought during the last 70 years the public in contact with seaweed by framing and regulating their relationship.
Recently, foreign operators of seaweed farms joined the board.
The Seaweed Company for instance wishes to capture and mediate the value of seaweed as an untapped resource around the world. Although, I gained through this Internet stroll the impression that some people already tapped this untapped resource.How can I position myself towards the red alga and its fellows?
We decided to take the train to El Jadida. To do what exactly?
We didn’t know from looking out of the train windows.
But here, on the shore, we unpack our Zoom recorder.
We want to listen to the stories of seaweed.

Title: A desktop decluttering from the shores of El Jadida

‘The film invites the spectator to perceive the process of gathering and interlinking information in order to enhance an understanding of the emblematic narratives and facts around Morocco’s red algae. The research threads which nourished the video essay “From the shores of El Jadida” (2021) are processed and interlinked through the decluttering of desktop files. The files themselves and their linkage to the Internet constitute the heart of the narration. Moreover, the desktop film reflects on the hybrid work mode of the RED GOLD residency, which is situated in between field research in the UK and Morocco, the digital space and personal reflection.’

→ The Animals, the Plant and the Stranger
← Inter-dependence: Evolutionary Ecology of Interactions [Migrant Testing]