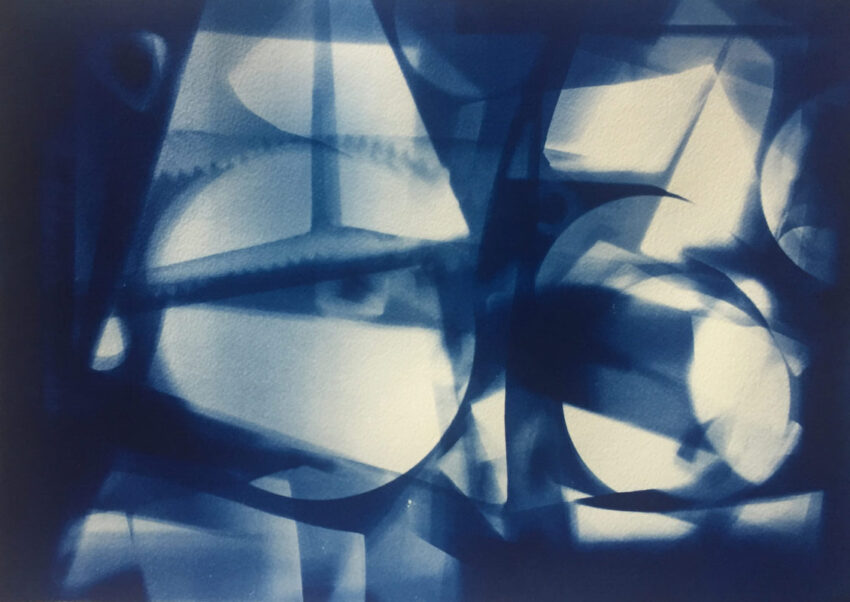 ‘Societies are torn and economic inequality is rising with the present crisis. We remain concertedly divided and perpetually adapting. The Covid 19 pandemic has highlighted isolation and division while demanding a cohesive humanitarian ensemble to trust and move in a certain distant togetherness.’

Movement has been a primary part of Solange Leon Iriarte’s practice. Throughout an MA in Sustainable Design, her detailed observational moving landscapes have given way to more abstract gestural art, a form of embodied response to ideas. Each of the four collections in Leon Iriarte’s online exhibition examines a different facet of sustainable design and complexity – the artwork explores division, borders and movement in a social and cultural framework. It highlights the environmental crisis and the challenges of balancing collectivity and individualism. See the works and read her essay-style reflections below:

‘How can system design allow for movement, tolerance and diversity, ensuring individual freedoms while also resisting isolation, marginalisation or rupture from a cohesive collective sense of purpose? This collection is a creative response to the webinar ‘Wicked Possibilities: Designing in and with systemic complexity’ held by RaMREG – University of Brighton’s Radical Methodologies and Enterprise Group – addressing the challenge of designing in and with systemic complexity. The intricate symphony of linework that emerged reflects what these discussions felt like. The pieces were not planned, but found in the making – a form of research through design springing from and opening new lines of inquiry. Drawing as a research tool evolved towards a gestural and abstract exploration of thought, an embodied yet simple material conversation that allows for intuitive and expressive engagement with difficult concepts and nonverbal action. It led to further artwork exploring the complexities, pluralities, and fractures resulting from growing political polarisation.’

Further information about some of the artworks can be found by clicking on the image to enlarge it, and then clicking the i icon.

A Chemist of Shadows

“First there is nothing, then there is a depth of nothingness, then a profundity of blue [the boundless void].”

‘These bluescapes were born intuitively as an abstract way of visualising and exploring concepts of social mobility, equality, interdependence, and the opaque and perpetually shifting nature of borders. Finding balance while attempting to resist or surrender to one another and our environment is a challenge. Can concrete structures enable greater flexibility to allow for diversity and individual freedoms within broader collectives? How might I explore this with light?

‘Solar etchings are blueprints (- my inner architect smiled -) so I happily chose to soak the questions in these improvised and irreversible choreographies, heavily influenced by my previous dance and movement studies. At the time of making these, I got lost in notions of shifting borders in seaside urban enclaves, in contemplating the movement of waves, and in exploring the unknown. The process demanded extensive research on the photographic history of cyanotypes, chemical safety, testing multiple materials and exposures, and night-time experiments in a makeshift camera obscura, which comically included Christmas light strips at the height of summer (- my adaptation to Covid-enforced incarceration). However, not unlike time, solar etchings proved challenging to work with, provoking further musings on the artificial nature of our industrial relationship to time, an otherwise indivisible,  empirical, and ever-elusive Kronos. The prints convey an ethereal and delicate set of complex overlapping shapes with indistinct borders that express the brevity of a moment in permanent form, where merging individual components in flux remain recognisably distinct.’

‘Anthotypes are solar etchings made with natural pigments and spices of vegetable origin. The process is similar to that used in cyanotypes but made strictly with organic materials that resist neither the elements nor time, and thus will vanish.

‘As well as causing irreversible damage to aquatic life and air pollution, industrial synthetic dyes have produced ideals of uniform products and lifestyles, with an abundance of choice paradoxically eliminating the distinctiveness and variety of marks, shape, and colour. Working with natural dyes requires embracing unpredictability, impermanence, impurity, and imperfection. Ironically, it is these defects that make ancient tapestries valuable, as they speak of ancient traditions and the stories of the pigments and cultures that made them. ‘Quality control’ as a means to broaden access and extend durability removes in this instance diversity, identity, and history.

‘Unforgiving Titan Kronos is often described as the biggest tyrant, but there are few external processes that affect us as democratically as time does. Time does not discriminate and touches us all irrevocably. Materials are no exception. Organic chemistry balance, colour, and weather create a kaleidoscopic complex set of interrogations of notions of durability. The work examines our inability ‘to let go’ and culture’s persistent pursuit of ‘foreverness’. What should be preserved and for how long?

‘Singular lives inevitably end, but human life continues. Individual lives’ irreversibility and endings profoundly impact identity and ideology. Our understanding of death is connected to our emotions, and a conscious ability to exist in three tenses: past, present and future. A battle with life’s transiency and a propensity to romanticise the foreverness of relations and objects, coupled with Westernised countries’ fast and disposable culture of immediate satisfaction has severely imbalanced our step with natural cycles.

‘Global trade has superseded the seasons, with produce available all year round. Access to cheap electricity, a resistance to  ‘unproductive’ night-time hours, continual social media and non-stop entertainment have shifted our day/night balance. Light pollution not only damages nighttime ecosystems and pollinators with further risks to our food chain, but it also threatens individual, societal and environmental health.

‘Circadian rhythms are our body clocks. They lock us into a specific time zone in the early hours of the morning through our eyes. Twenty-four hour lifestyles mean a growing number of nighttime workers and commuters are at risk: sleep deprivation and exposure to light at night causes obesity, diabetes, DNA disrepair, depression, and reduced immunity, and is now recognised as a Class 2A carcinogen. How many more suffer from insomnia? Night-time biological processes affect the brain function, including memory, alertness, learning and physical coordination. Working when you are sleep-deprived has been compared to working when you are drunk – it’s unsafe and unproductive. Furthermore, some of the worst train and plane crashes – not to mention other accidents causing life loss and incalculable damage to the environment, such as oil spills and the infamous Chernobyl nuclear disaster – have been caused by human error directly linked to lack of sleep. Is it time we think about Time?’

‘Undertaking a weather collaboration for sun printing, when living in the UK, reveals a certain optimistic nature. Capricious clouds, however, in reasonable amounts, are necessary to create the mid-tones that interlace light and shadow polarities.

‘Anthrotypes (playfully described since I directly intervened in them with brushwork) attempt to improvise and experiment with failed solar etchings, adding more traditional media such as ink, charcoal, Conte Carré crayons and varnish, a method better suited for the dark winter months. The work is not an illustration but a recollection of the experience lived during months of extended physical isolation and connection to the collective beyond. It investigates the tensions between striving for stability, the inevitability of change, and the necessity to embrace creativity to adapt, evolve and (we hope) learn, time and time again.’

Artist and Designer Solange Leon Iriarte has a multidisciplinary background and range of interests. She uses film, writing, drawing, cyanotypes and other mixed media in her restless interrogation of themes such as continuity and rupture, identity and belonging, stability and transformation. Her work is characterised by an embodied spontaneity and sense of play, anchored by intellectual precision. Movement is central to her practice – the physicality of the making process, the tectonics of thoughts and ideas, the shifting shapes of the body as it moves, alone and with others, through space and time.

Originally from Chile, France and Scotland, and now settled in Sussex, she often returns to ideas of geographical movement and dislocation. The experience of growing up in the Andes, under the shadow of a dictatorship, has infused her work with a quixotic curiosity, with hints of magic realism, as well as an unflinching political dimension. Her Sustainability studies are driven by a belief in the connectedness of all things, and the power of the creative process as a tool for learning, communication, compassion and conflict resolution.

Solange is a mother of one, a lover of cities and nature, animals, yoga, music and art. She is on the advisory board of Forests Without Frontiers, a charity rewilding the ancient Carpathian forest in Romania. This June she was awarded the Experimental Design Practices Prize 2021 and the John Andrews Drawing Prize in June 2020. Previous studies include opera singing at the National Conservatoire of Modern Music in Santiago, Architecture and Urban Design at The Catholic University of Valparaiso in Chile, and Architecture and Printmaking at the University of Brighton, UK. She has exhibited at ONCA and Cameron Contemporary Gallery in Brighton, Jaggedart in Marylebone, London, and her fastidiously detailed cityscape drawings are held in many private collections.