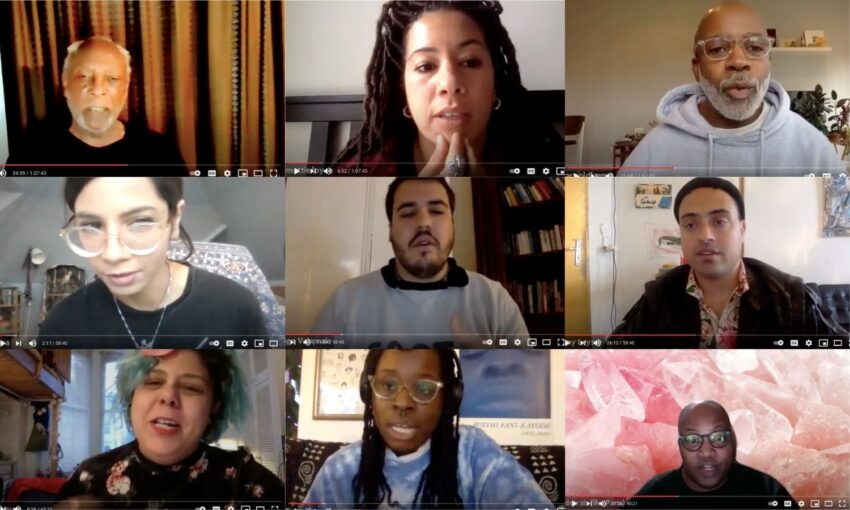 In November 2020, ONCA Community Artist and Curator Nadia Buyse hosted a series of online panel discussions exploring different approaches to anti-racist leadership and praxis in the arts and cultural production.

Nadia says: “This summer I felt a bit inundated with ‘anti-racist’ sentiments and efforts from a lot of institutional powers in response to the international momentum of BLM. From galleries to universities, the narrative and policy initiatives of arts organisations and academia reeked of white saviourism. All of a sudden, there were calls everywhere for Black artists to submit their labour, work and intellectual properties to these institutions which hold the power to ‘make or break’ or to ‘legitimise’ early researchers and young artists of colour.

This is not demeaning or damning in itself, but what we saw at the top level of these institutions were white curators, programmers, etc. attempting to be ‘anti-racist’ or apply plans and policies working towards anti-racism with little regard to the need for diversity of leadership within these institutions. I hate this narrative that black and brown artists are struggling and ‘need help’ or that their work is only valid if a curator thinks it can teach white audiences something about their preconceived notions of diversity. It diminishes the important roles that black and brown artists, curators, educators and programmers have always contributed to our world. Of course this rhetoric is nothing new, but it’s gained new relevance as attention on the BLM movement, which began after the murder of Trayvon Martin in 2013, grew as protests spread internationally in the past year in response to the murder of George Floyd at the hands of white police officer Derek Chauvin. I wanted to hear other people’s responses. I also wanted to connect within my international communities of other established artists of colour to see what they believe exemplifies anti-racist cultural leadership and how it’s existed long before white gatekeepers decided to pay attention.

This panel series took place over Zoom in the autumn of 2020, in three different sections, which we are releasing over the next three weeks. From today, you can watch the first conversation between artist and educator Arnold Kemp, writer, activist, and founder of the Invaders John B Smith, and curator, artist and cultural activist Mattie Loyce. Each artist presents something from their own work/ practice/ research and then further we discussed different routes of cultural activism – from artist-run spaces for artists to the role of music in the civil rights movement in 1960s Memphis.

Here is the recording from the first discussion, which can be viewed with subtitles by clicking the CC button on the menu bar of the YouTube video.