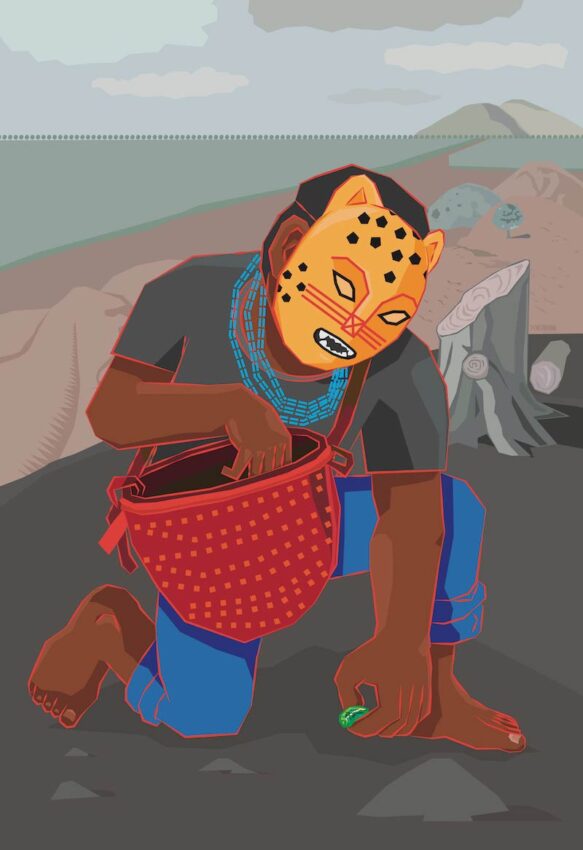 This is a reflective statement by Persephone Pearl, Lydia Heath and Katie Tume on the process of curating Beyond Ruin for Lost Species Day 2020.

This year, as for countless other organisations, ONCA’s survival, alongside the mental and physical health of its team, was our principal concern. In the spring we received emergency support from Arts Council England and other generous supporters to keep our staff in post. At that point, Lost Species Day was not a priority commitment as we didn’t know if ONCA would be functioning by November.

As the months of lockdown and home working have passed, we’ve developed our confidence in sharing art work online. We built a stud wall for hanging art in the gallery window, so that simple exhibitions are viewable from the street. It became apparent that we would be able to host an exhibition for Lost Species Day, but that financial constraints meant it would be necessary to keep much of the labour in-house.

It was evident from the start that the staff members who could dedicate the most time to the project would be white people. Was this problematic in a project purporting to be anti-racist? We wanted to be faithful to the 2020 invitation to Lost Species Day event organisers to consider how their work contributes to the intersectional environmental movement. Co-director Persephone (also a co-founder of Lost Species Day) and Lydia the ONCA Gallery Manager reached out to local ritualist and textile artist Katie Tume aka Mother Eagle to talk more, because Katie’s work repeatedly explores the links between colonialism, biodiversity loss and grief rituals. Katie agreed, on the condition that this would also be an opportunity for artists of colour to show their work. We set up an open call for works to be shown in the ONCA gallery window and online, asking for contributions from people whose work explores the intersections between racial injustice and environmental harms. We wanted to be clear about this in order to avoid certain types of work including:

Probably as a consequence, for a long time, we received no submissions. In hindsight, we are ambivalent about the decision we made to put out an open call. We had a project budget, so arguably, we just needed to do the research and reach out to new artists intentionally. The call did not in fact save time or energy. We made it a paid invitation, because volunteerism is exclusory, loaded in favour of the participation of people who can afford to work for free. Making the fee clear (which it was not at first) makes it easier for people to know what they are being asked to do. But despite the clear language, this open call, like most open calls, was exclusory for other reasons too. It’s been a learning experience about how to reach out to new artists. The open call has its limitations: ideally (but not in this case) it’s a way to generate energy around a project. But it’s also difficult to be strategic and selective.

Part of our wish with this exhibition has been to use it as a platform to amplify the work of artists of colour who are exploring the issues that animate us at ONCA. But our networks are predominantly white, so we likely alienated a number of prospective participants by framing it primarily as a paid invitation for artists with marginalised identities. Feelings of discomfort around this are worth examining.

Lost Species Day has been working to unearth its roots in white environmentalism, and embed intersectional politics in its practices, as has ONCA. But a call from us asking people of colour to come forward is likely to elicit scepticism.  There are many reasons why artists of colour might not feel safe to approach a majority white organisation claiming to engage in anti-racist work. What makes this offer trustworthy and safe? Given that white supremacy culture permeates pretty much every aspect of contemporary life in the UK, white people attempting to engage in anti-racist work are likely to cause harm and hurt as we confront our complicity in systems of structural power that benefit some people at others’ expense. Participating in projects around environmental harm that don’t have a clear grounding in anti-racism can be painful for people of colour. For example, white people weeping about extinction and environmental destruction can be traumatising for people with marginalised identities, if those weeping people are not also doing work to address racism and other forms of social inequity.

In addressing the whitewashing of climate art, it’s important to centre themes rather than the identity/ positionality of the artists, but also to acknowledge the tension within this, and to be mindful of the inevitability of making mistakes. This endeavour treads the line of identity politics: everyone has their own position and response, and there are artists of all identities making relevant and important work that should be platformed.

Where prospective collaborators do come forward and there’s dialogue, we become real to each other. But due to the inherent racism in search engine algorithms, and the echo chambers and social silos that spin out from this, it took a lot of time and work to find a diverse array of voices for this exhibition. For example, if you type ‘environmental artist’ into Google, it will show you almost exclusively white people, and mainly men. If you don’t tell Google to find Black artists, you get white: it’s the default.

People have had mixed responses to this year’s overall Lost Species Day invitation. Some organisers feel that the theme is alienating, or detracts from the issue of biodiversity loss. Their choice of focus is their prerogative. The theme is reflective of where we are at ONCA and at Lost Species Day. It is hard indeed, exploring the connections between the extinctions of species and ongoing structural harms to humans. A POC event organiser might say, ‘There’s no way I’m talking about racism for Lost Species Day! I’m exhausted by that conversation! I just want to focus on warblers.’ Perhaps they don’t want to be positioned as an authority figure, or to be dealing with racism on this day of remembrance, which is understandable. But what of their colleagues who perhaps benefit from greater structural privileges? There is a risk that in deferring to the wishes or politics of an exhausted colleague of colour who wants a day off from micro-aggressions, white organisers may veer away from having difficult conversations about their brand of environmentalism among themselves.

We have called this exhibition for Lost Species Day 2020 at ONCA ‘Beyond Ruin’ because each of the works reveals ways of thinking through and beyond the ruins of extractivism, white supremacy and ecological devastation. We celebrate the artists’ voices, the struggles their works champion, the cosmologies they point to, the experiences they name, the visions they hold, the truths they tell and the griefs they express.

The task of attempting to support the growth of the intersectional environmental movement is always ongoing: we want to continually listen, learn, amplify voices, raise issues, share space, hold space, be safer. We offer this exhibition in a spirit of curiosity, humility, transparency and accountability. We welcome all dialogue and feedback. In working long-term to address these issues we will continue to make mistakes along the way. Our intention to do this work is sincere, yet it will always be work in progress.