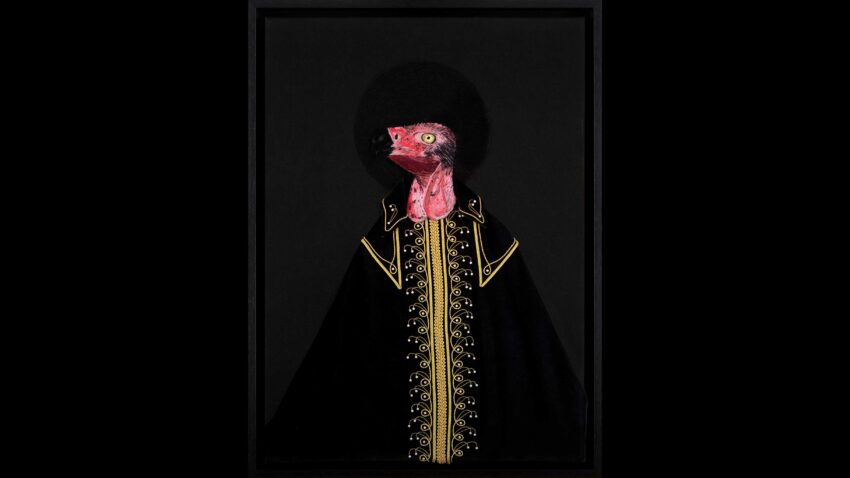 This group exhibition ‘Beyond Ruin’, accompanied by a weekend of online events, is ONCA’s offering for Lost Species Day 2020.

Lost Species Day 2020 invites organisers and participants to consider how their work can contribute to the flourishing of the intersectional environmental movement. In collaboration with local ritualist and textile artist Katie Tume AKA Mother Eagle, ONCA used this invitation as an opportunity to reach out to a diverse range of artists working with these themes in the UK and internationally.

We have called this exhibition for Lost Species Day 2020 at ONCA Beyond Ruin, because each of the works reveals ways of thinking through and beyond the ruins of extractivism, white supremacy and ecological devastation. We celebrate the artists’ voices, the struggles their works champion, the cosmologies they point to, the experiences they name, the visions they hold, the truths they tell and the griefs they express.

‘Amazonas: Guardians of Life’ aims to document the struggle of the indigenous women defending the Ecuadorian Amazon from oil exploitation through a series of images combining portraiture with their written testimonies and artistic expressions. The words written on the images are self-reflections of the women’s lives, of their culture, history, traditions, and their reasons for fighting against oil extraction in their ancestral lands. The traces around the portraits use the same natural dyes with which they decorate their faces to draw the symbols and patterns that reflect their personalities and their struggle.

Click on the images and the i button at the bottom to display the translations. View the full series of photographs here.

Felipe Jacome is a photographer born in Ecuador. After finishing his studies at the London School of Economics, his work has focused on issues of human mobility and human rights. In 2010 he won the Young Reporter Competition of the International Committee of the Red Cross (ICRC). Jacome’s photos have appeared in publications such as National Geographic, The Washington Post, Foreign Policy Magazine, The Guardian, Vice Magazine, and CNN. Jacome’s work has been exhibited in Paris, New York, London, Geneva, Amsterdam, Quito, LaPaz and Washington DC. In 2019 he was selected by World Press Photo for the 6×6 Global Talent Award for South America.He is a Fujifilm X-Creator and is represented by Anastasia Photo Gallery in New York City.

‘People Who Become Animals’: These works deal with indigenous perspectives in which some peoples who descend from certain clans have the power to transform themselves into animals. The Gods gave these people the ability to wear animal clothes and to transform themselves into jaguar, snake, catitu (peccary) etc. They enabled these animals to hunt, fish and then take off their clothes and become normal people again.

Denilson Baniwa was born in Barcelos, Amazonas, Brazil, in 1984. His art explores his experience of being Indigenous in the current moment, combining traditional and contemporary Indigenous references, and making use of Western icons to raise awareness about the struggle of Indigenous peoples in various media and languages. His work was showcased at the 22nd Biennale of Sydney, at Centro Cultural São Paulo (CCSP), Itaú Cultural, Centro Cultural Banco do Brasil (CCBB), at the Arts Centre of the Federal Fluminense University (UFF), as well as various other venues. He was also one of the guest artists at Amazonian Poetics, a Brazil LAB/Princeton University and Museu Nacional/UFRJ workshop held at Princeton University in 2019.

‘Full Glory’ highlights the marks imprinted on the body with its indents of lines, scars, bumps and textures which speak of a story through patterns. Mirroring the bark of a tree that grows more abundant with physical stories etched onto its surface. The voluminous shape and wild botanical hair of the female depicted seeks to show the unequivocal power of freely allowing nature to sculpt the body, hyper realising biological patterns of the skin to counter the warping of nature’s individuality.

Josephine Chime is an East London based mix media artist transgressing ideas of accepted beauty through the deconstruction of the body. Josephine says: “The strong cord that connects my work is the visual analysis of the onslaught of female homogeneous images and how technology shapes the vision and ideals of what is desirable. My creative practice moves between art and design, teaming with industry clients creating installations, products and illustrations for Gilles Peterson, Boiler Room, Havana Club and British Council to working with a diverse range of schools using art workshops as an expressive healing tool.”

Learn more about the stories and inspiration behind these artworks as well as the process of making them here.

Katie Tume AKA Mother Eagle is an artist from West Sussex. She makes textile portraits of animals that explore how a reduction in cultural, social or spiritual reverence for the natural world has resulted in vulnerability, endangerment or extinction. Her work examines themes around species loss and the decline in the natural world, and seeks to subvert popular narratives around what extinction and ecological threat looks like. Recently this often includes turning a critical lens on systems of colonialism and white supremacy and investigating how those systems have, and still do, create cycles of ecological violence that affect human and animal ways of life. She often uses religious iconography and mythology in her work to engage the viewer in a dialogue about what people hold sacred, and how that has changed.

‘Spoils’ reflects on the black and brown womxn who have served as collateral damage in the wake of white violence, and as stepping stones on the journey of white men’s discovery on both a personal and global scale. ‘Untitled’ was produced for this exhibition, and a hand painted version is on the side gallery window at ONCA.

Ruby Wolfe is a self-taught fine artist and tattooist based in West Sussex. Primarily concerned with transformation in biological, psychological and spiritual realms, Ruby explores themes of death and decay, identity and the dark feminine to create figures in symbiosis with plant life and powerful, chimeric womxn. She uses folklore, mythology, plant symbolism and anthropomorphism as an analogy for spiritual initiation as well as a visual representation of earth’s ecosystems.

Engaging the viewer in visual fables about womxn’s return to self, ancestral rites, and the inseparable thread between people and nature, Ruby’s work gives us a glimpse into a world where trees have voices, womxn are numinous, and death is only a door.

Ruby works predominantly in ink, watercolour and digital mediums, using photographs to draw reference from nature and to create digital colour palettes from places she’s visited to imbue within her work.

Selina Nwulu is a writer, poet and essayist with a commitment to social and climate justice. She has written for a number of outlets such as the Guardian, New Humanist and Red Pepper and has toured her poetry extensively, both internationally, including a literary tour in Northern India, and throughout the UK with a number of cultural institutions such as MAC Birmingham, BBC Radio 4 and Southbank Centre. She has also been featured in Vogue, ES Magazine, i-D and Blavity amongst others.

She has been a voice for climate justice for over 10 years, working with grassroots, charity and arts organisations, in both a creative and consultancy capacity, to strengthen narratives around the gaps between race, justice and the climate crisis. From 2017- 2018, she was ‘Writer and Creator in Residence’ at the Wellcome Trust, looking creatively at food and how it connects to our health and matters of social and environmental justice. In 2019 she worked with Somerset House on a project around loneliness and climate change for their Earth Day Season, a project she is looking to expand. Later that year her work was also exhibited as part of Get Up Stand Up Now, an exhibition, also at Somerset House, celebrating the past 50 years of Black creativity in Britain and beyond.

Her poetry and essays have been widely published in a variety of journals, short films and anthologies including the critically acclaimed anthology New Daughters of Africa. Her work has been translated into Polish and exhibited on the Warsaw metro. She was Young Poet Laureate for London 2015-6, an award that showcases literary talent across the capital, and she was shortlisted for the Brunel International African Poetry Prize 2019. Her first chapbook collection, The Secrets I Let Slip, was published in 2015 by Burning Eye Books and is a Poetry Book Society recommendation.

These recent works depict the hypothetical decay of cities. The idea is to convey awareness: the consequences of ongoing deforestation will lead only to the extinction of humans and other species. In the aftermath of the apocalypse, in the absence of humans, nature shall return to reboot on the rubble of every great city.

Artist and architect Deru Anding moved to London in 1998, having been born and raised amongst the forest-dwelling Bidoyoh tribe in the region of Bau & Kuching, Sarawak, southwest Borneo. Over the past two decades, much of his homeland has been destroyed for palm oil plantations, logging, and other developments. Deru’s large panoramic drawings, exhibited at ONCA in 2019, evoke the environment and community of his childhood. These new works explore future cityscapes where nature has reclaimed power and all that remains of even the most ambitious architectural feats are vestiges.

Tell us what you think

Tell us what you think by completing our feedback below, and don’t forget to visit our gallery window & foyer wall where some of these artworks are on display.