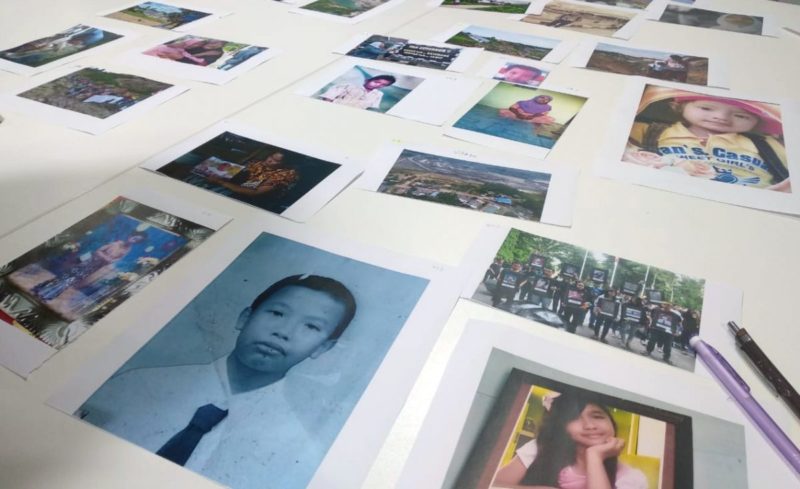 At the core of what ONCA does as an organisation is engagement with social and environmental issues; creating inclusive spaces for artistic practice and collaborative learning.

Beyond providing a platform or space for artists to present work and talk about their practice, ONCA is dedicated to public engagement with climate change activism.

While the conceptual marriage of earth, art and climate change has had a presence since the later part of the 20th century (see Robert Smithson’s Spiral Jetty and Joseph Beuys’ End of the 20th century) we are moving into a crucial period of engagement where art about climate change needs to be more than an aesthetic choice, it needs to be a source for intersectional discourse, dialogue and engagement.

“This exhibition seeks to ‘look differently’ at the politics of coal extraction, taking an intersectional approach and bringing together feminism, ecology, climate change and politics. Presenting photographs from Indonesia, the exhibition will be accompanied with a workshop, reading group, film screening and talk by Indonesian scholar-activist to create a space for challenging ‘north-south’ narratives and practicing climate justice.”  (ONCA Website, accessed 2019.)

The use of the term ‘intersectional’ within the context of this exhibition carries an overtly politicised and multifaceted intention; to assert the correct definition of this word and to assert that the misuse of this word is detrimental to women of color and conversations around ‘north-south’ / ‘east-west’ / decolonial activism particularly in the art world. The term intersectionality was coined by Kimberle Crenshaw in her seminal article Mapping the Margins; Intersectionality, Identity Politics, and Violence against Women of Color and was used as a way to posit the importance of considering multiple identities and how they inform oppression and injustices:

“The problem with identity politics is not that it fails to transcend difference, as some critics charge, but rather the opposite-that it frequently conflates or ignores intra-group differences. In the context of violence against women, this elision of difference in identity politics is problematic, fundamentally because the violence that many women experience is often shaped by other dimensions of their identities, such as race and class.” (Crenshaw, 1991.)

This essay is explicitly interested in the way that women of color have different proximity to toxic masculinity and patriarchal violence because there is also an ‘intersection’ of race and (often times) class that are influencing this. While the original intent of this essay was more focused/centered on women coming from the United States; it has opened the doorway, linguistically speaking, to talk about the condition of feminisms in other parts of the world, how are feminist ideals diversified and prioritised? How are we contributing to or working against these feminisms? Or in this particular case, how does coal extraction affect women specifically in Indonesia and why is it important for us in the UK to contribute to political actions?

Mai Jebing, an Indonesian activist and student at the University of Brighton said it best at her speech during the Youth Strike 4 Climate demo this July:

“I hope that in the future when you talk about the climate change there is a different dimension of climate change that we need to mention. Because the child, the youth in that area (Indonesia) also need raising their voice. That’s difficult maybe in our country because it’s different, the government situation. Maybe is easy to have a rally here but it’s difficult for us, for example, to do that in around coal mine area, because of the influence of the company. “

Often times the voices of those living in the global south can be diminished or tokenised within the conversation of climate change; yet because of industrial colonialism these are the people who are in direct proximity to danger. Indonesia, for example, is one of the most mined countries in the world and has one of the lowest reported air qualities. The air pollution is so bad that citizens have created a lawsuit against the government to improve air quality. This exhibition focused on the experiences of women who lived near the mines; focusing on child deaths, lack of natural resources, and all the detrimental effects of the coal industry (a direct byproduct of British colonialism) that has devastated the area. In support of this exhibition there were a couple of events; a film screening of ‘Sexy Killers‘ and discussion with scholar-activist Siti Maimunah and a postcard writing workshop attended by over 50 people. The film Sexy Killers is a documentary exploring the coal mining industry in Indonesia. The film went viral on Youtube (full film with subtitles) after severe backlash and ban based on criticisms condemning the film for targeting political figures.

Along with this screening, we hosted a postcard writing initiative urging the government to close the open mining pits and to send messages of solidarity to bereaved mothers who have lost children due to these open pits. During the duration of the exhibition we managed to send out over 100 postcards. The intent for the postcard action was two-fold; direct communication and solidarity with those affected, in conjunction with creating a digital archive to be put online and shared to Indonesian politicians who have the opportunity to make significant changes.

While this exhibition has come and gone, you still have many opportunities to join the conversation of intersectional climate justice here at ONCA. Here are some upcoming events:

As apart of Global Climate Strike week we will be hosting a GLOBAL WITNESS ENVIRONMENTAL DEFENDERS WORKSHOP on September 22nd from 5pm to 8pm at the main gallery space.

And in October from the 2nd to the 6th we will have an exhibition entitled CLIMATE TALKS where Climate Museum UK, a new mobile museum, will investigate how we can create tools and objects within an institution to talk about the climate emergency.

Also if you want more information about intersectional climate change please feel free to check out this AMAZING resource guide assembled after THE UNBEARABLE WHITENESS OF GREEN workshops facilitated by Susuana and Persephone at ONCA this spring.