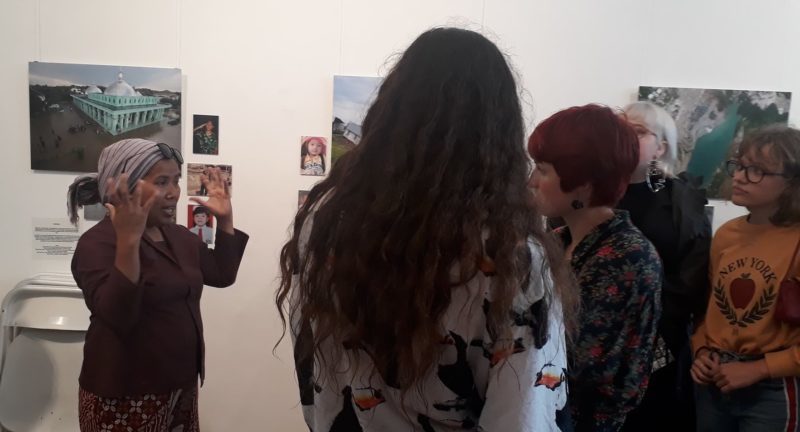 Activist Mai Jebing spoke about the impact of extractivism on people in Indonesia at the Youth Strike 4 Climate Brighton demo in July 2019.

Mai: So, we bring the story from Indonesia. Indonesia is the second biggest coal exporter in the world. So um, but this country is also – especially the island called Kalimantan – is also the home of orangutan – its the critically endangered species in the world, one of them, but it’s also rich biodiversity, orchids and so on. So we have the rich of the forest. But it’s changing, it’s changed. When the demand from the market, demand for the coal, from the global market is increased. Just three weeks ago, since 2011, there is 35 children died in coal mine pits. It’s like you, your age, it’s like 6 until 24 years. What happened? Because, most of the area in the city, the capital city of Samarinda- it’s the capital city of province, East Kalimantan Province – 71% of it has become coal concessions. So you can imagine there is no place for playing, safe playing for children. And then they’re just playing in the abandoned coal pits because it’s like, big and blue and it’s like a pool. So the corporation is not closed the mine, the abandoned mine. But not just that. Because then, because then the forest’s destroyed and then water contaminated and then the mother is difficult to find the water, the clean water. So also because this area in the forest is like rice fields, and also the forest is the source of the medicine and food, and now people difficulties to get there.

But we have relation with this – UK British company, British government have relation with this. Why? Because for example the biggest coal in Indonesia, in East Kalimantan is owned by British company in the past – Rio Tinto and British Petroleum – and now sold to the Indonesian rich family, with all the legacy. Not just that. It’s also there is gold mine in East Kalimantan – the biggest gold in this island in the past is owned also by British corporation Rio Tinto that closed in 2003 and leave 77million tonnes of tailing waste there. So when we talk about climate change we always talk about the emissions. We need to connect with the global south. We need to connect: actually extraction is also – coal extraction, gold extraction mining extraction – is also making people suffer. So I hope if you talk about climate change you talk about my country, and others’ countries in the global south that suffer from coal extraction, from mining extraction which most of the factories and uses go to the global north, with the financial banks also support how the company operates in my country, in the global south. So I hope that in the future when you talk about the climate change there is a different dimension of climate change that we need to mention. Because the child, the youth in that area also need raising their voice. That’s difficult maybe in our country because it’s different, the government situation. Maybe is easy to have a rally here but it’s difficult for us, for example, to do that in around coal mine area, because of the influence of the company.

So I am studying at the University of Brighton at the moment [crowd cheers]. And Aidan invited me to speak to you. So we have exhibition in ONCA we call “Extracting Us”. Why “extracting us”? Because coal extraction is not just extracting the climate but also extracting us – us, family around the coal mine, but also you here in the context of a cycle of the fossil fuel. So, when we talk about fossil fuels, we cannot just talk about burning the coal, or burning the fossil fuel; we need to also talk about how they extract, how the water is spent and the diversity on it. So, we have an exhibition in ONCA until 21st of July, so today I invite you to write the postcard for the government of Indonesia, for the mothers of the children that died in mine pit – to write your solidarity, to ask the government why they haven’t closed the abandoned coal pit or decreased the consumption of coal. So we invite you to come there today at 2pm, and maybe before then, to come to ONCA to write a postcard. And we will send to the Indonesian government, to the mothers of the children that died, and all who are responsible in this situation. Thank you.

→ My Summer at ONCA
← what the water gave me: Q&A with Lily Rigby