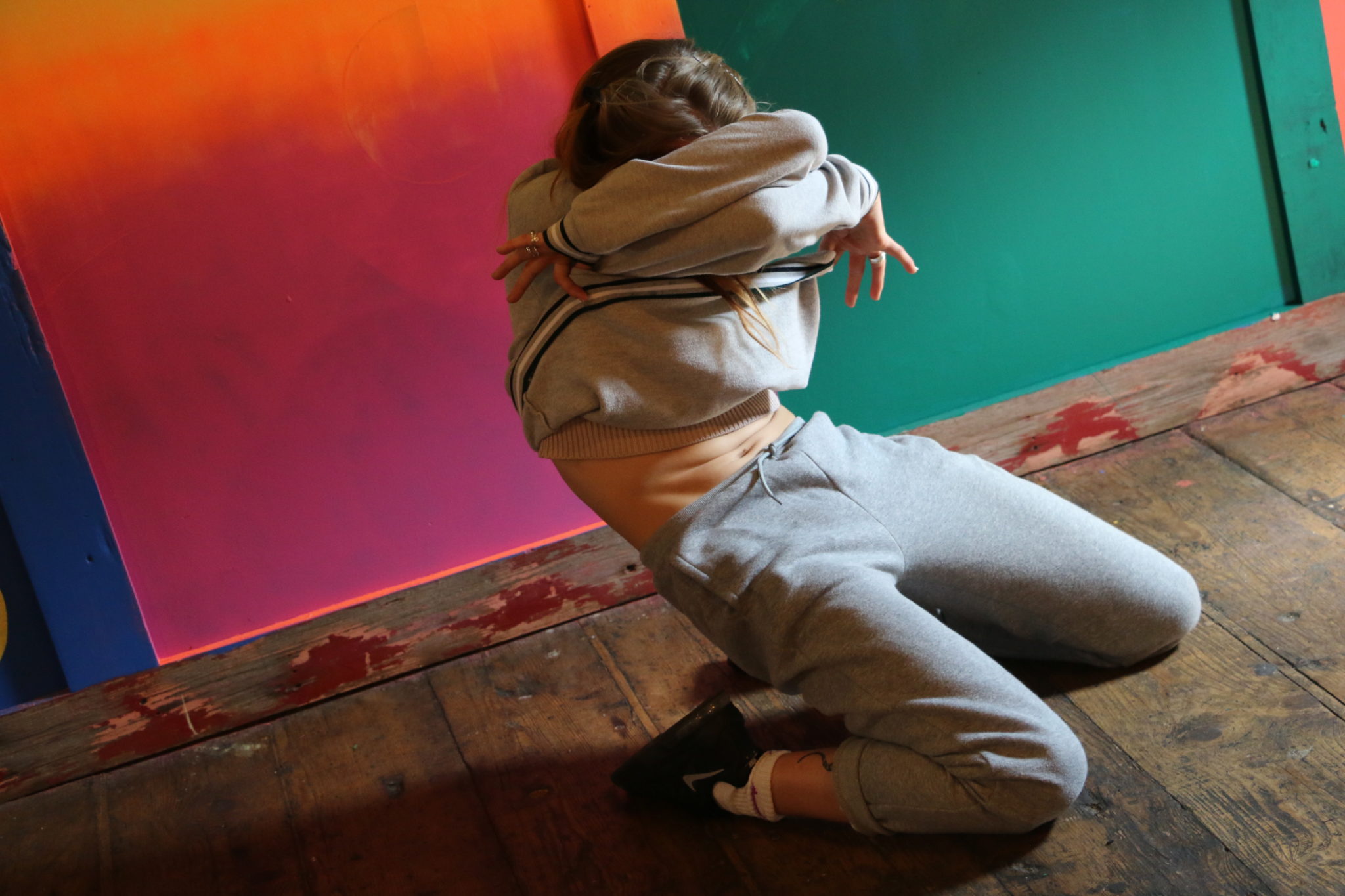 The Callous Affection Dance residency at ONCA Barge was a part of an R & D process leading up to the debut of new Contemporary dance work – Muerte Amongst Us.

Susuana: Hi everyone, it’s Susuana from ONCA and I’m here today on the Barge with Lilian Deans Allison who is our current artist in residence. Hello.

Lilian: Hello there, how are you?

Susuana: I’m fine, how are you?

Susuana: So can you tell us about what you’re doing on the Barge and –

Lilian: And what it’s all about? OK, so my new piece of work – so I have a company, Callous Affection Dance. Er, we are just beginning our creative process for our next piece of work – Muerte Amongst Us – which basically blends Western culture, Western modern day culture, with a little bit of Mexican folklore, in that the inspiration for the piece of work actually came from hearing about Santa Muerte who looks like the Grim Reeper but is actually a motherly figure who picks up every departed person and carries them over the other side, where they can rest eternally peacefully. They can return to their loved ones on Earth. And I just thought that was such a beautiful and comforting representation of what we see as the Grim Reeper – someone that comes and chops your head off and sends you to hell. It’s a perfect representation of how our society is a couple of steps behind a lot of the rest of the world. And I think by opening up conversations through things like art, like cathartic dancing, like raving, partying with other human beings, bouncing creative vibes off each other – I think we can open up a conversation with each other that may lead us through to having a slightly more relaxed and open view on the inevitable fate that we all face.

Susuana: Well I think it’s really interesting, especially because I feel like social like media websites sort of shut down any conversations of suicide and death because they see it as an at risk thing. Which means people who need those platforms to talk about it, don’t get those platforms. How do you feel about those sort of

Lilian: About shutting down the subject coming up? I think that’s exactly our problem in Western society – it’s the ‘keep calm and carry on’, do you know what I mean? It exists in so many of our sort of ticks, our social ticks, and I think that together we share that keep calm and carry on attitude, because it’s what we’ve been taught. Other cultures seem to embrace the conversation, which is what you’re saying, and maybe that’s why we have so many male suicides, because male people are encouraged not to talk about their emotions and we as a society are encouraged not to talk about death so you know, there’s blockages happening. Like communication isn’t happening and it’s almost key. And art, being one of the most useful tools for communicating emotions, feelings and issues. I think this is where my inspiration came from and what you’ve said is what I think is important.

Susuana: In terms of people getting engaged in your work, how can they do that?

Lilian: Well, we have planned an experiential workshop for members of the public, again it will be pay as you feel – you know, whatever you want to contribute you can. And basically the whole workshop is designed to kind of let you in on our thinking behind the piece of work and how we believe as a society, we can overcome these shared anxieties around death. One of the main aspects being you know, young people in rave culture – being a young person who has grown up raving a little bit, I know the benefits of rave culture but again this is something that as a society this is something we’re not encouraged to talk about, not to bring into the light and I think that actually, yes there could be part desperation for something else in life behind the rave culture, but also actually i think its complete rejoice. It’s enjoying the people, the life, the love rather than focusing in on the blockages, the miscommunications and everything else in society that young people are growing up and facing. So yeah this is one of our examples of how as a community we can come together and overcome things like death anxiety, um and the workshop is sort of part of that.

Susuana: So can you talk a bit more about your company and how it uses workshops and shows to engage with people in these issues?

Lilian: Well, a big aspect of my choreography is sort of the theatre influence. I think a lot of the time you can’t really have a conversation with your audience unless you do bring in other mediums of art. For example text or spoken word can often be something that I use. So it’s fluctuated in the very short time that it’s existed, between being dance based and being largely theatre influenced and I think that is sort of my man tool as a choreographer – to actually have a conversation with the audience about the issue rather than show them the result of my research if that makes sense.

Susuana: Yeah totally. As a dancer and a performer, I guess you have to be quite confident on stage. Your work involves trying to get people who might not be that confident in those spaces to be comfortable in taking part – how do you go about doing that?

Lilian: Well that is what this whole process is really centred around because I’ve done a lot of dancing and I know how to make work about what I’m thinking. That’s not something I’m worried about, that’s where I am confident but where I’m not confident is opening up a can of worms around someone that might not be as OK with it as me. Such as death – how to I communicate a positive message whilst exploring such a scary subject. And this is what I’m trying to find out by doing public workshops. With social media, interactive posts and things like that, I’m trying to get the public to give me an idea of what makes them overcome the fear of death. Because we all have to do it every day don’t we ? And I know how I do it but I don’t know how they do it. So that’s what this is all for – it’s tailored to help me get a bit of a better understanding of how other people are reacting to the… you know… everyone feels it, it’s there for everyone so how are they reacting to their own death anxieties and coping with it? How can I then use that in my work to give a positive message, yeah.

Susuana: How can people engage with your social media to try to answer these questions or feed in their experiences?

Lilian: So, follow us on instagram – @callousaffectiondance, follow us on facebook – Callous Affection Dance again. We have started announcing acts for Amidst showcase – that’s Amidst – and basically I’m compiling a line up of young fierce talent to perform alongside one another. My work Muerte Amongst Us will be playing debuting at the event um, so if you follow us you’ll see all the exciting acts that are coming to the event, you can see when I’ll be at the Barge, you can see when the workshops are. Soon you’ll be seeing the interactive posts going out there, opportunities to feed back, questionnaires, feedback forms will be left at the Barge and other venues. I really want people to get involved and there will be periods of time here at the Barge where the doors will be open so people can just come in, ask me questions about what I’m doing, see what I’m making that day and get involved.

Susuana: Great thank you very much.

Lilian: Thank you, see you later!