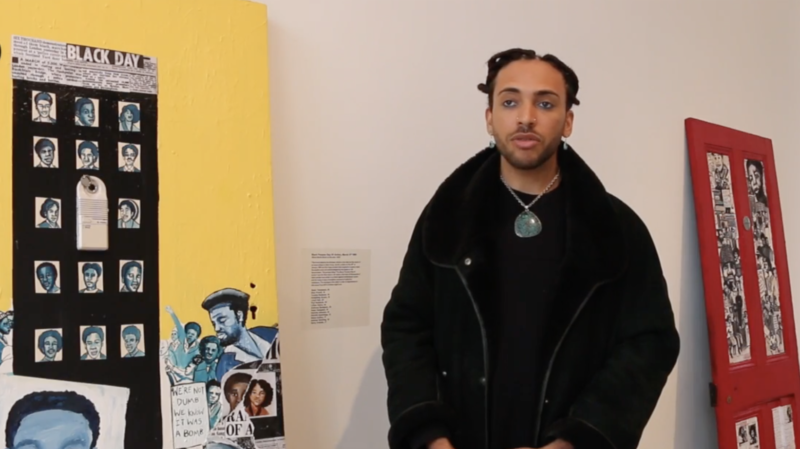 A Bridge of Fire: a poetic response to post Windrush Caribbean experiences in the UK

Jacob V Joyce brings to ONCA a mix of old and new sculptural and sonic works, combining batik portraits and murals with sound recordings of contemporary Black British poets PJ Samuels and Sirena Reynolds. The works explore aspects of Black British experience, with a focus on commemorating victims of police brutality and celebrating Black activists. All of the works relate to the history of Caribbean migration to the UK.

My name is Jacob V Joyce and this is my first solo exhibition, A bridge of fire, here at ONCA.

This exhibition is a space for anger because anger is a valid response to violence and I think sometimes we feel afraid to give our anger space.

There’s a strange climate in the art word to kind of hold space for and focus on the spectacle of black death and suffering. I think it’s present not just in the art world but just in pop culture in general.

Instead of like zooming in on the suffering and the pain, I think what I find really liberating and exciting and exhilarating is the ways that black people have responded to violence and responded to death.

The murals on doors, one of them is about the Black People’s Day of Action. In 1981 there was a house fire in New Cross in which 13 teenagers died.

Lots of people believed it was due to a racist arson attack and there was very little recognition from the UK government, from the Queen about the violence of this.

And black people in London, in Birmingham, in Liverpool, across the UK organised to have a Black People’s Day of Action where thousands of people marched across London in protest.

This exhibition is also a space for not just looking at action and looking at community and like collective responses to violence but also creating that space. So tonight we’re having a dinner which is specifically for queer people of colour in Brighton to gather.

I actually lived in Brighton for three years for university and I remember not ever seeing a space that felt like it really held black and brown people. Like especially black and brown queer people so it feels like a real big privilege to be able to come back to Brighton and create that Space. Urm. Yeah.