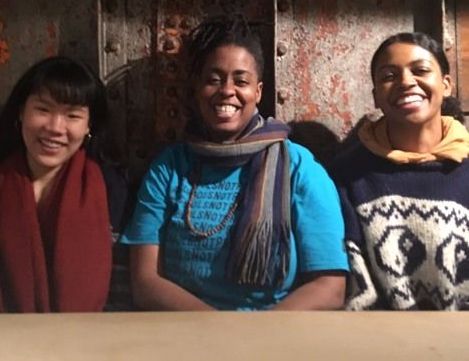 Susuana Amoah: Hi it’s Susuana from ONCA and I’m on the barge again with our artists in residence. This is week three of the residency and final day. So how’s everybody doing?

Susuana: So what things have people been up to since I last saw them?

Tsai: I’ve been doing alot of drawing and spending a lot of time on the boat.

Laurèl: Yeah lots of editing, lots of final decisions, a bit of re-shooting, wrapping it all up.

Susuana: So since this it’s the final day of the residency, what sort of things have you run into trying to get the things finished over the last week?

Matice: I’ve definitely run into, you know, the vision in my head and needing to translate it into the final, you know, piece and product. And having to unexpectedly make changes, edits, revisions to get to the end. And then running into supply issues – like you plan a certain amount of supplies and then things turn out different than planned, and stores close, and you have to deal. So, some challenges, but pushing through.

Tsai: I think I’m just trying to visualise my idea into images, trying to finish my script for a story.

Laurèl: I think, some interviews were rescheduled so I was a bit nervous about that. But it’s all come through now, all good. Premiere Pro playing with me! But then it’s been really good to kind of have that, what you’ve visualised, what you’ve been working towards, to finally be like ‘aaahh it’s happening!’. It’s coming together, I can see it forming. Even though like changing your mind about decisions and stuff like that.

Susuana: Great, so the big show is next week, the big opening on Wednesday. What are your thoughts beforehand? Are you looking forward to it?

Matice: Yes I’m very much looking forward to it … because that means the painting will be done.

Tsai: Yeah I’m excited about it, also I’m also quite nervous. I’m not sure, I’m not quite sure what we’re going to talk about. I’m not sure what kind of questions people might ask. I think it will be a challenge for me, yeah.

Laurèl: Yeah I think I have similar nervous feelings. I forgot that it’s a weird things that I don’t really like talking to people that I know about my work. I like meeting people through it, and talking to strangers about it, but I always get super nervous for some reason when I talk to people that I know. But I’m quite looking forward to the talk because we’ve been in this kind of small space and we’ve had a few people come in and out. So to open up the conversation, I’m really looking forward to. And see what comes of that.

Susuana: What kind of questions do you think people might bring up about your work?

Matice: I’m guessing with an abstract painting people will ask me what I was thinking about when I made the work, what do the colours mean, is there any additional symbolism in it that isn’t immediately obvious. I’m guessing those are the types of questions that folks will come with.

Laurèl: I guess with the videos that I’m making, so it’s three videos that are going to be shown, like you listen to them separately, but shown alongside each other. And I think when you first watch them and first look the links might not be so apparent. So I think maybe people ask me ‘What are the links?’, why I chose to put what I did together, perhaps.

Tsai: I think people might ask me things about my country because there’s a picture, a map I drew. The reason I drew about these issues is because I want to learn about the things that happen there. And maybe people will start to take care about it much more.

Laurèl: I hope people ask more things about how we can connect further on like the issues that we’re bringing up, and how the content of the work is like relevant to others or how if they see someone or hear someone in one of the videos, maybe like they’ll be interested in that project. I hope it will lead to more unions. I think most of us, if not all of us, are going to have some vinyl on the wall near our work which will break it down a bit. But also think sometimes … sometimes I hope the work can speak for itself, or push people to do their own research, I guess.

Susuana: So thinking about your three weeks on the barge, what things have you learned from being in this specific residency?

Matice: I think for me it’s been a lot about adaptation. So adapting to working on a vessel that’s alway moving, adapting to a space that hasn’t been used as a painting studio yet. And so you know things that I needed to bring into the space, different ways that I needed to set up the tables than they were already set up. Definitely communicating and coordinating with my fellow artists about how much space I needed to take up. Learning what it’s like to be talking about the work in conversation with folks before the work is made, as the work is being made. Those were all things that were new for me with this particular residency and this particular set up. And just getting to know Brighton – so you know where the supply stores were, you know learning about the reclaimed wood place where I got my panels, were all new things that I had to go out explore and figure out.

Tsai: I think for me it’s quite similar – adapting to a new place as a studio. Downstairs the light is not so good so mostly I work on the first floor, and it’s like when people are using the space, I need to move my work here (downstairs). Also when I work upstairs, people knock on the door, they are very curious about what we are doing in here.

Laurèl: I think one of the things is about kind of being in a space with… being in a space with people who come from very different ways of working, really different mediums. That’s been really inspiring to have, and those conversations that have come out of that. I haven’t generally shared space with painters or illustrators before when making. And it’s kind of encouraged me to have those cross-disciplinary (in terms of the medium you use) conversations and maybe enquire into more spaces like that rather than keeping with people who do sort of like time-based work.

Susuana: Going back to the open studios that we had last week and also the fact that the barge is a public space how have you experienced it, having people come and talk about your work? How has it impacted you residency?

Laurèl: It’s been a really strange experience. Usually, I would not talk about myself or my work as much as I have been in these past three weeks. I would just make it and show wherever to whoever and maybe have a conversation about it but it’s felt like being under a weird kind of lens – but not necessarily in an intrusive way – but in a way that has made me reflect on my work in a different way. It’s definitely been a kind of strange experience.

Tsai: Yeah I think I feel quite similar. Because actually when I saw open studio I thought we didn’t need to talk, we just need to show what we have done.

Matice: yeah, I think that for me it’s kept me engaged in the constant process of thinking of how to talk about the work. And I think in other residency experiences, there’s less priming and less prompting to think about how to talk about the work as it’s being made or before it’s made. But in this experience there’s been definitely much more of an external component than being off and isolated in a space and being totally in your head and internal.

Susuana: So, have you got any tips or advice you’d give to somebody who’s thinking about doing a similar residency, whether it’s POC residency or a residency that discusses climate change and environmental justice or lost species or a residency on a boat? Any tips?

Matice: Brush up on your pirate lingo! I mean I ran out of things to say beside ‘Ahoy’ and ‘Arrrgh’!

Laurèl: Yeah it was really embarrassing!

Matice: It gets repetitious, I admit that. Other tips? You know at first I needed to adjust to the constant movement and so I did bring some ginger with me and some carbonated water to help with my own motion sickness. But after awhile you get used to it, like I’m just used to the fact that I’m always going to feel like I’m on water even when I’m on land.

Matice: I just get used to it, always feeling like I’m swaying, so knowing that that goes away after time. I think that having conversations with folks around environmental justice and racial justice is really helpful and so I would advise someone to enter into those conversations and to engage with those conversations as much as possible. ‘Cause I found them really inspiring and helpful. And I think that again there is the tendency to want to work by yourself and/or just with your own inspiration and it was really great to have that outside influence on my process and on my work.

Laurèl: I’d just say ‘Go for it’, because I feel like this experience has made me… made me feel a bit more hopeful, which is I know also to do with what I was researching but also the fact that so many people have at different stages from the open evening, to the open studio, to working on the Barge, to the staff at ONCA. It’s been this concentration of people that are invested in climate justice and invested in making space for perspectives that are not usually given space. To read about things happening and to read books and articles about people that are working together and researching together is one thing, but to actually be in that space is really encouraging and feels really supportive. Obviously, there’s a lot in the news at the moment about tipping points and so on, it does kind of restore some balance in yourself if nothing else.

Tsai: The thing I want to say is… I think when people engage in doing a project like this, maybe they will put themselves more into that, and once you start doing it, you will look more and more. Also maybe you could have a different influence with people around you, there would be more awareness about what is happening now, what is happening in the world.

Susuana: Great! Well thank you very much, I will see you next week at the opening for your exhibition, take care. Say bye!