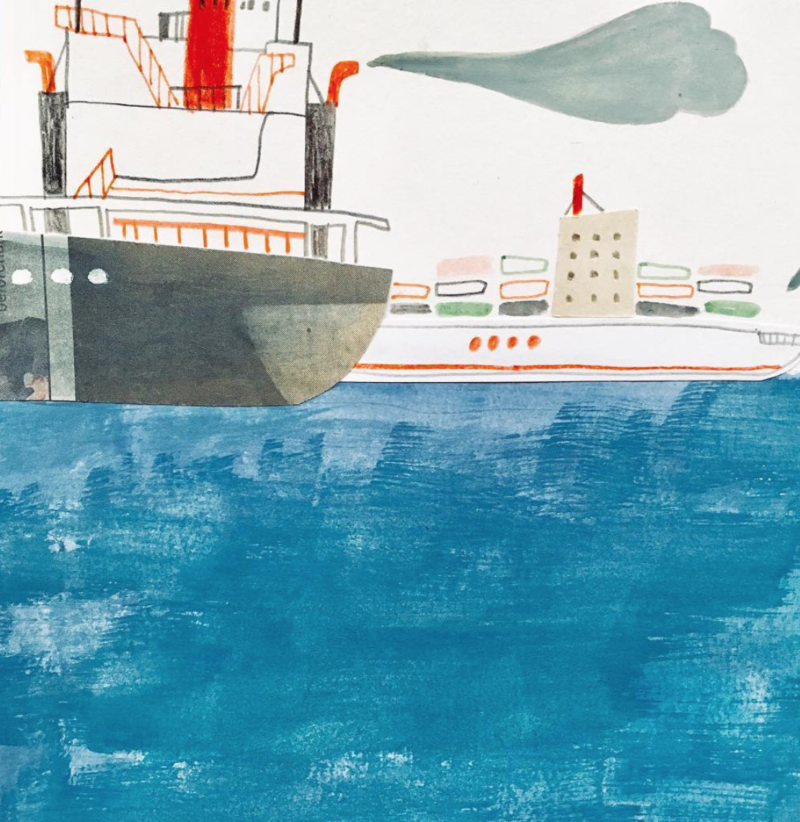 Susuana Amoah: Hello it’s Susuana from ONCA and I’m here today back on the barge with our artists in residence. How’s everybody doing?

Matice: Making art on a boat!

Laurèl: We had some really great meeting with Imani who is the curator… and like you were saying before, looking at where our work crosses over, looking at … seeing if we could find any central themes, thinking about titles for the show.

Tsai: We also talked about how to cooperate with three different artists. One is doing painting and video and I’m doing like illustration… How to put the three different things together in the same topic for a show.

Susuana: So how is your work as individuals developed over the last week?

Laurèl: I think personally I have much more clarity with my work, I kind of knew the pools that I was swimming in, but I wasn’t exactly sure what I wanted… I was looking at things from quite a vast way and it was getting a but like overly like complex. And now I’ve become a lot more focused I feel a lot like I’m breathing easier about it now.

Tsai: Yeah, I think I also got a more clear idea of what I’m good at. I think I will make six illustrations according to a story happening on the island from the country I come from. It’s basically like bringing some ideas about the people who is … when they are small … they are like aboriginal people … they don’t have much voice for themselves, and also bringing about pollution of the environment.

Matice: So when we had our conversation with Imani earlier in the week one of the things that came up in the conversation was thinking about racial justice as ecological justice. And so for me you know it was really great to hone in and focus on that concept and in reading and doing some research I got inspired by an idea and the last week (amount of time since we last spoke) has been about getting acquainted with the inspiration you know and really trying to drill down and define and get familiar with what is actually coming through and how the concepts and ideas all fit together. And so.. I have been on a hunt for materials and explored lots of Brighton in the process, or a lot of Brighton in terms of what’s between the barge and Cass Arts and ONCA! Gotten acquainted with what it’s like to create art in this particular dynamic and interesting space.

Laurèl: It’s been a really interesting space and for me because I’m doing video stuff, I’ve kind of have been up and out filming, recording back to the boat to sit and edit and kind of meditate on what I’ve been gathering. And that contrast has been really nice and really…. Yeah it’s just been really nice. Had lots of… I went and visited a project in Morden called May Project Gardens which is a family home turned into a community garden and had some conversations speaking about obviously racial justice as environmental justice and vice versa. Speaking about growing food, speaking about the power of that, speaking of the challenges of that and the relationship with food as a person within the diaspora and all those sorts of things. Yeah really great.

Susuana: So following on your explorations of Brighton and around the marina, have you been to any sort of events or talks that have helped and fed your work?

Laurèl: We were just talking about Jacob V Joyce’s first solo exhibition at ONCA, ‘A Bridge of Fire’. We went to see that – I think it was the Thursday night – correct me if I’m wrong, which was really wonderful, there was a QTPOC dinner and really a wonderful space to rest and come and talk, meet new people, see our friends, the work was absolutely amazing. I want to go see it again actually to spend some more time with the work rather than talking with people. And the food was boom, like poetry, amazing.

Matice: Yeah, I really enjoyed that exhibit as well and the fact that there was a QTPOC space held for – in response to the work and then also the dialogue with each other. As someone coming from the United States it was really interesting for me to see the connections and intersections in terms of theorist that I’m familiar with who are U.S based like Sylvia Winter, her portrait, and then also like the Black Panther party, you know the piece that was highlighting specifically the U.K’s Black Panther party and the work of the Black Panthers here. And knowing that’s a group that started in Oakland California, right. And so for me it was really interesting to see the diaspora of ideas and the diasporic way that resistance works in multiple places. And then I’ve got to shout out to chef Mama Sherry, her food was bomb. I hear her youtube page is popping! Just came in ….You could tell there was a lot of love and care, it was a vegan, gluten-free meal which I thought was really dope.

Laurèl: Including dessert which never happens!

Matice: Including dessert, you! And just having interesting dialogue which was what it means to be a queer person of colour in Brighton, the dynamics of the community the work that the community is doing to create more spaces for folks, you know to gather, to connect, and to build deeper relationships. And the articulation of wishes. Like what do people wish for? And hearing the wish for there to be more folks of colour, more queer folks of colour specifically in Brighton. The wish for taking over spaces so that instead of being the only person, or the only queer person of colour in an all-white space, flipping that dynamic completely and what would that be like.

And then reflecting on what are interpersonal issues are, and how do we break down those barriers between each other. So it was cool, it was nurturing in all the ways: the food, the art, and the conversation.

Susuana: Within the next week what do you hope to have achieved or seen on the barge and in Brighton?

Tsai: To finish our project!

Susuana: How do you feel about that?

Matice: I feel good, I feel a little bit overwhelmed. But then also just trusting the process and having faith that what gets finished is what gets finished. Really committing this next week to an idea and to a concept and moving forward is one of the things I’m looking forward to. And I think that in the next week and beyond I hope to like get off the boat a little more and see more of Brighton and engage more with the folks, and people who live in the area, particularly black folks and queer folks of colour. So those are some of the things that I’m looking forward to.

Laurèl: There was talk at the dinner or more events to hold a space like that, and exchanging numbers and all the rest of it. I definitely want to keep up with that. To have this as a spot to kind of return to and gather with people. Yeah I’m excited actually about the next week. Like I think ing the more… the more we talk about the work and having met each other not that long ago, seeing the frustrations and seeing the processes that people are taking to realize the ideas is gonna be like really beautiful, and cathartic even. To see the work finished, the work in space.

Tsai: Yeah I’m excited too. I think excited to see how we produce our work and maybe see how does it work in a gallery to show people what we are doing. And maybe how they react when they see all this work.

Susuana: After speaking to each other and having those meetings have you altered your work in any way or form to relate to each other’s work or message in any way?

Matice: I think for me the concept of connectivity was something that came out of our initial conversations with each other, with you and Imani. And so I think how to do that visually is something that’s been on my mind and been influencing me as I move forward. And also looking for where the connections, you know what are some of the keywords that show up in all our work. It’s been part of my process, in thinking what’s the process in overarching language for this project.

Laurèl: I think when, Tsai when you were talking about your work and about engaging with children and the multiple layers of communication, with adulthood and childhood. It helps me think more about if I want and can engage with different ages and what is speaking to who. So that has definitely affected kind of how I’m thinking of presenting my work.

Tsai: Yeah I think the main thing we are thinking about is how to communicate with people.  Maybe it’s all about the future or how to show people what we want to do to make it better. Like maybe we have some common concept or idea. Also what we are doing is quite different.

Laurèl: I’m really looking forward to it because I guess what we’re talking about is all about communication, communication, communication. And I guess it has become quite insular in these little rooms. Like I know we’ve done our research we’ve been out speaking to people but actually, with ONCA being in Brighton, I know two of us at least are not Brighton residents, so to see who engages with ONCA, who visits the gallery and have conversations about them. And this opportunity to say “if you see my work here how do you interpret it now”? Yeah, to have that different perspective introduced part way through I think is really … really great.

Tsai: I’m also quite excited but also a bit nervous about who’s going to come here. How do we really interact with people and let them know what we are doing? Yeah, I think it’s quite interesting and I’m also looking forward to it.

Matice: I guess I have mixed feelings. I think in one sense there’s a part of me that wishes that I was further along, so that I’d have something more finished or polished to resent to the general public. But at the same time I recognize that I feel really grounded in the direction that I’m going in, which feels good because I think there are some ways that folks will come in and be like “Oh this is amazing!” or come in and be like “ Oh this is terrible!” and that kind of feedback will influence the work. And I’m at a place where its like I want to be in a relationship with people and what not, but also at the same time not reactive to people’s responses to the work, you know, while it’s still developing. And so I feel good that I don’t have enough done for people to respond that deeply to it! But I think I am far enough in my conceptualisation of the work to be able to talk about it. So, that’s cool.

Laurèl: I’m looking forward to the talk as well with Imani and Ama. I’m wondering. I’m excited to see what’s going to be brought forth out of that. And how the discussion is going to play out with the twenty people are expected to come, to have that many voices in the space. Yeah it’ll be good!

Susuana: Great! Well thank you. I’ll let you go and meet your guests and I will see you next week.