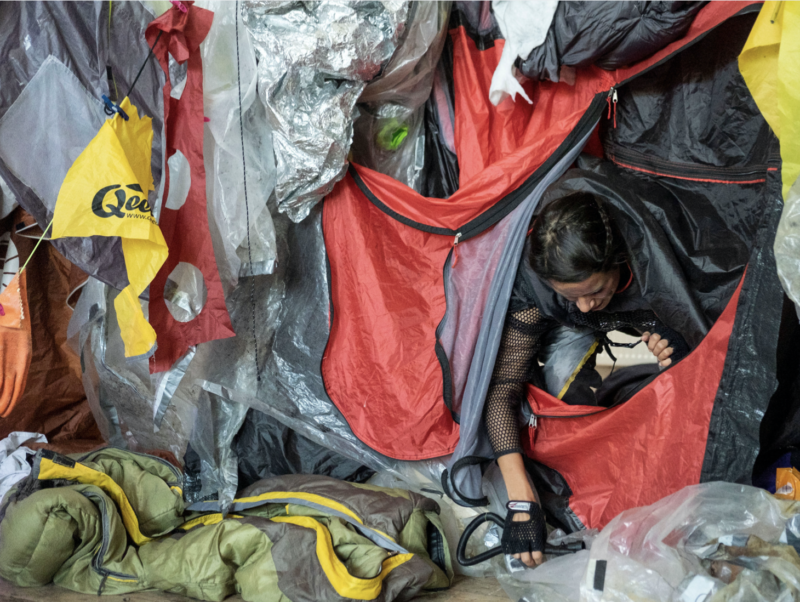 As part of the ONCA Visionary Fictions summer programme, the theatre company HOAX took over ONCA for an immersive installation and residency packed with workshops and performances aiming to help audiences and participants get un-stuck in the context of climate change.

Together: So, we, we wanted to do something about climate change. Yes. But we didn’t know what to say. No. Or do. Or buy. Yeah. So we decided to make a show about it.

Together: And we are HOAX!

Ayisha: What happens in the show is that there is a series of weather games that are played by the three characters that we perform and inhabit. And these weather games tiptoe the line between fiction and reality and they become more and more real for the characters and start to sort of inform what happens as part of the story. The set and the costumes were designed by an artist called Andrea Carr. And she collected what you can see here from Reading Festival, at the end of the festival. And she filled up her car with sleeping bags and tents and other discarded bits of equipment. And brought them back to her studio in London in Peckam. And started to develop them and change them into our set and costumes with what we were working on in the rehearsal space at the time.

Flavia: We originally started we were journeying to the centre of the Earth, and so she took her inspiration from camping equipment which is why she went to Reading Festival, to the clean up. But at one point in the process we just all collectively stopped journeying and we became very stuck. So we renamed the show Stuck. We worked with an amazing director called Lucy Hopkins, she’s a clown. She’s just brilliant and she was very good at pushing us to be our most idiotic selves. And trying to help us be less serious about the subject.

Ayisha: We also worked with a director and critical thinker called Richard Pettifer. He was great in really challenging us and working with us and interrogating philosophy around ecosystems, the environment, climate change, art making.

Sabrina: It was heavy.