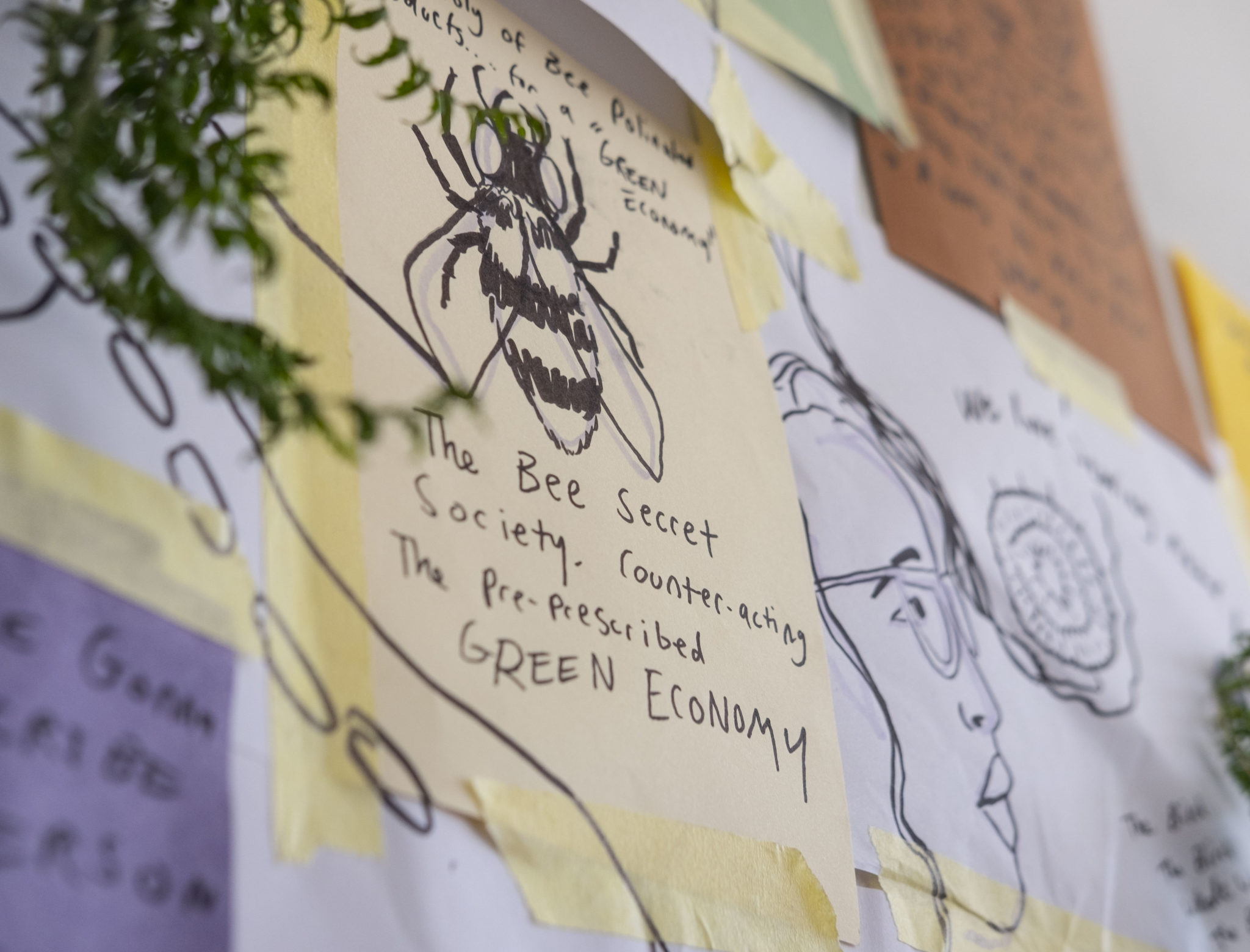 Supported by a project grant from the Arts Council, and as part of the national Season for Change, in summer and autumn 2018 ONCA hosted a series of sci-fi inspired workshops, talks and installations.

Hi, I am Persephone. I am the director at ONCA. This summer we ran an amazing programme of events and activities here in Brighton, called ‘Visionary Fictions’.

Visionary Fictions was inspired by two amazing writers and thinkers: Walidah Imarisha, who actually coined the term Visionary Fictions to describe sci-fi that envisions just and habitable worlds and Donna Haraway who coined the term ‘staying with the trouble’ to describe the task that communities could take on into the future of living in and restoring damaged places.

The amazing Jabob V Joyce launched the programme with a workshop on writing speculative fiction and they challenged us to imagine futures which are off limits, structurally or ideas wise to us. To challenge them, to challenge those limits and  imagine things differently.

After that Jacob came back actually to be part of it to this amazing symposium that we held with Jacob illustrating and Karla Sweet, who is a writer based in London, and Walidah Imarisha, and also two local eco-poets came and ran workshops.

And then we had a scratch night where performing artists generously shared their visionary fictions. That symposium day took place in an extraordinary context of an installation by HOAX Theatre.

They came with a number of bags full of recycled and repurposed tents and sleeping bags from festivals that they had made them into this cave. With which they took over the gallery and turned it into a kind of into an immersive installation.

From that they also performed their show which is called ‘stuck’, which deals with despair around climate change. It’s a clown show. It’s funny and it’s disturbing. Having said that, it’s entirely original and brilliant.

After HOAX and our symposium we had the marvelous Beverly Naidus from Washington state. Came with her installation which is called ‘We Almost Didn’t Make it’. Which deals directly with despair and overwhelm around environmental change and social injustice.

She turned the gallery into a space which you actually were kind of like enveloped by what she describes as trauma curtains. And you have to kind of fight your way through this suffocating installation in which you’re faced with all these terrible statistics and overwhelming fears and you kind of make your way through to something that Beverly calls the portal of possibilities, where you’re invited to imagine yourself as an ancestor.

So image the will is here and 150 years and you have descendants and you’re leaving a message, some advice or a promise for them. And then Beverly was joined by Joan Haran for a fabulous talk about the artist’s role and how to keep socially engaged creative practice resilient.

Straight after Beverly , we had Irene Fubara-Manuel’s digital installation ‘Dream of Disguise’. And this is a game and in which you are invited to imagine that you are a migrant crossing at international boundary, at a border. At a UK border actually. The piece is about racialised, biometric facial recognition software and how black migrants are systematically surveilled. As well as being disturbing it was also fun and very accessible. And there are also talk from Imani Robinson and a performance by Akila Richards.

We also host a panel discussion that was chaired by harriet Cavanagh and Naomi McAdam. It was called ‘Beyond Ableism’ and was a panel of people living with disabilities and exploring their visions of a future world in which ableism might be a thing of the past.

Science fiction and Speculative fiction are amazingly permission giving art forms in terms of loosing up the imagination of the participant or the artist. Here are the world where anything is possible and you can try that might seem entirely ludicrous or impossible in the world that you’re in now. But if you take it to a different planet or a different time where the boundaries are completely different then you can find all sorts of potentially new solutions to things that might seem like intractable problems.