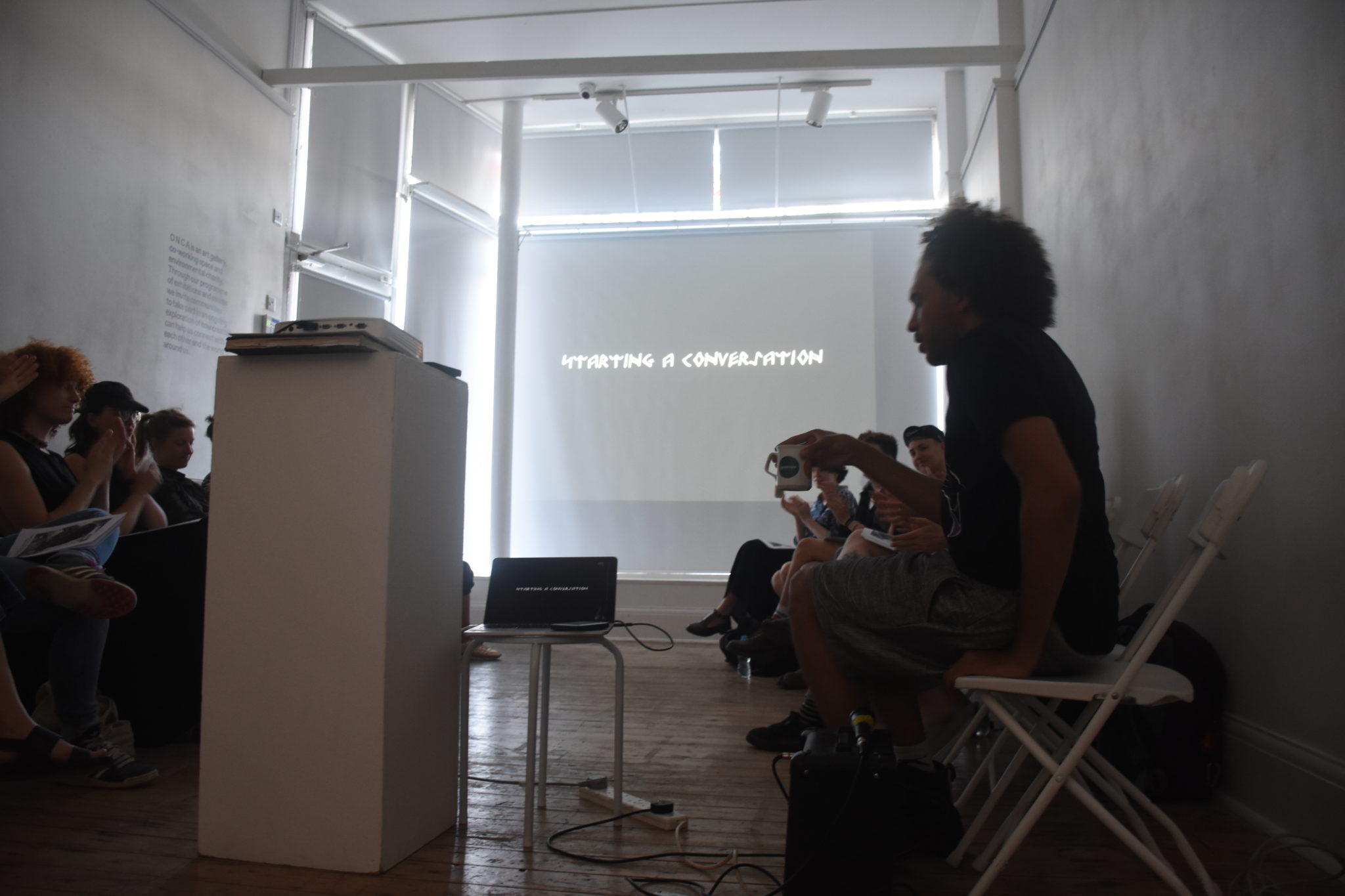 To launch Visionary Fictions, ONCA’s summer programme celebrating sci-fi that imagines beyond dystopia, Jacob V Joyce led a workshop about creative practice and sci-fi for social justice with a vibrant and diverse crowd.

Jacob explained how sci-fi has proved to be a good means for them to express and address complex social issues like gender and race. Jacob uses sci-fi as a tool to transcend voyeuristic forms of representation, explaining that real-world LGBTQI struggles should not be treated as entertainment.

The workshop started with ‘Groundr’ – a performance including voice, music and visuals. It emulated a WhatsApp conversation between an earthy creature and one coming from another planet. The conversation was deep and intimate, they shared feelings about how it is to interact and develop relationships. The piece was moving and a great way to start a conversation. As part of the conversation, participants introduced themselves. They shared their backgrounds, interests, and experiences with science fiction writing, reading and watching. Participants talked about different topics such as favourite childhood books, gender utopias, anarchist communities and the potential of science fiction to bypass the barriers of reality.

The first task during the workshop was to read a handwritten note by Octavia Butler, “a science fiction writer whose evocative, often troubling, novels explore far-reaching issues of race, sex, power and, ultimately, what it means to be human”.  Butler’s piece was an invitation to believe in the power on the imagination: that by stating what we want to happen we are using our inner power to change the future. Jacob invite us to do the same. Each participant took time and wrote their own statements about what will happen and how they will make it happen.

After a short break the next task of the workshop was to read an extract of Butler’s Parable of Sower. “Parable of the Sower is the Butlerian odyssey of one woman who is twice as feeling in a world that has become doubly dehumanized. The time is 2025. The place is California, where small walled communities must protect themselves from hordes of desperate scavengers and roaming bands of people addicted to a drug that activates an orgasmic desire to burn, rape, and murder. When one small community is overrun, Lauren Olamina, an 18 year old black woman with the hereditary trait of “hyperempathy”—which causes her to feel others’ pain as her own—sets off on foot along the dangerous coastal highways, moving north into the unknown.”

The group read the text together, with each participant in charge of one paragraph. The extract was about life on earth in 2024: while there is a lack of water on Earth, missions to Mars are being promoted. “The cost of water has gone up again… Dad says water now costs several times as much as gasoline… most people have given up buying gasoline. It is a lot harder to give up water. Fashions helps. You are supposed to be dirty now.”

There is a special character who caught our attention: a women who had travelled to Mars and died in her attempt to colonise it. “One of the astronauts on the latest Mars mission has been killed. Something went wrong with her protective suit and the rest of her team couldn’t get her back to the shelter to save her. People here in the neighbourhood are saying she had no business going to Mars anyway.”

Going to Mars was everything this woman had wanted and she wanted to be buried there.  We discussed how colonialism was the worst feature of the 20th Century, but in this story it seems to be the only option to escape a dying planet. The group discussed this and many issues in the text: colonisation, inner power, the desire to become compost.

Then we moved on to a more academic text about Afrofuturism. According to Jamie Broadnax , Afrofuturism is the reimagining of a future filled with arts, science and technology seen through a black lens. The term was conceived a quarter-century ago by white author Mark Dery in his essay “Black to the Future,” which looks at speculative fiction within the African diaspora. Our text was an extract from an academic essay by Kodwo Eshun. Kodwo, following Toni Morrison, positions African slaves as the first modern subjects, as well as “real world” subjects of science fiction scenarios. Afrofuturism reorients history in part in order to offer counter- or alternative futures. In his article, among other things, Kodwo describes the problem of “future fatigue” – the future nowadays seems to be colonised too: “it exists in mathematical formalizations such as computer simulations, economic projections, weather reports, futures trading, think-tank reports, consultancy papers”.

Write a counterfuture, one that subverts the one laid out for you by society. Rebel, make it seem ridiculous and impossible, subvert and challenge it in any way you choose.

Some of us are meeting on Wednesday June 27, 4-6pm upstairs at ONCA to do the homework!