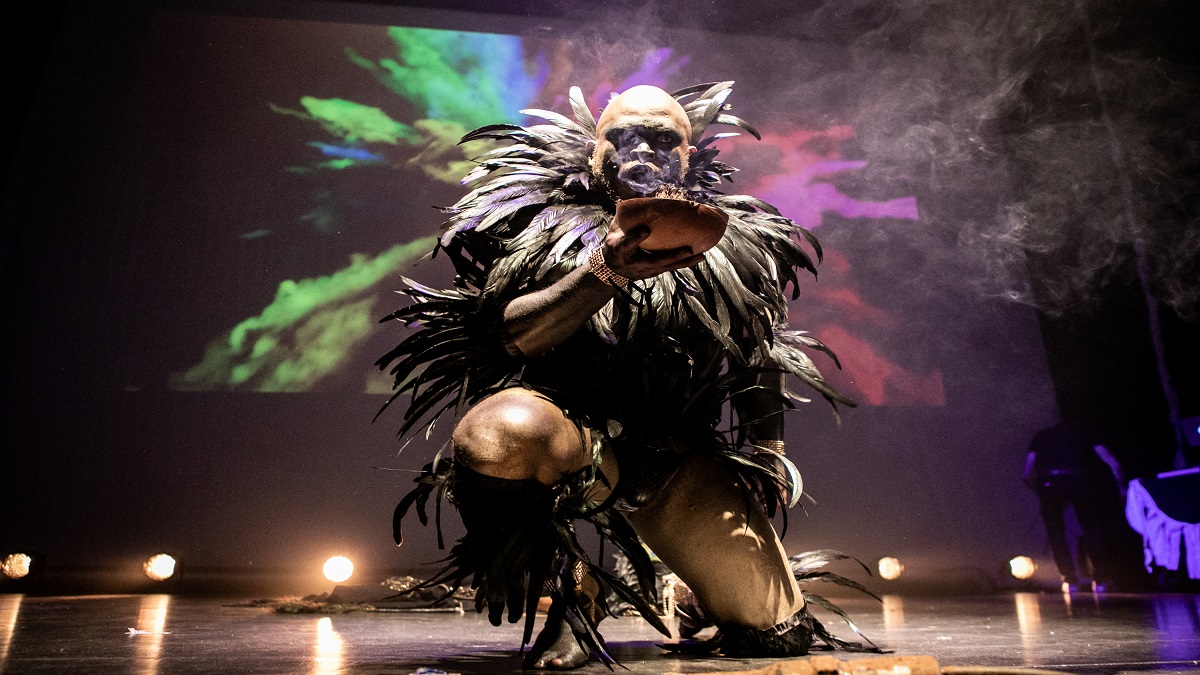 Recently, the ONCA team went to Tarik Elmoutawakil and Rob Jones’ Brownton Abbey at Brighton Dome: a night that promised to be a “performance party [where] celestial beings from queer dimensions… transform Brighton Dome into a kaleidoscopic off-world temple.”

As a fan of sci fi and speculative fiction as tools for inspiration and social transformation, I was personally eager to experience this version of Afrofuturism, an aesthetic that centres Black experience, actions and agency.

Walking to the sounds of Janelle Monae and Prince into a Dome filled with rainbow-tasselled floating balloons boded well for the rest of the night and for the inclusivity, gentleness and playfulness of the event. The cavernous hall (or Mothership?) was peopled by numerous dazzling non-binary beings in silver and white, with spectacular fringing, netting, protuberances and glowing details. The queer femme-centred energy of the night was delightful and refreshing.

The first act we watched was by Rachael Young, who, supported by amazing musicians, shared an excerpt from her show Nightclubbing in which she oscillates between telling the story of three Black woman excluded from a London nightclub in 2015 and channelling the power of Grace Jones. The performance, which saw Young erupt from something like a volcano and then transform herself into a deity by wrapping her body in black cables, was mesmerising but tantalisingly short. Luckily, Young is due to return to ACCA in Brighton in November 2018.

The incredible Lasana Shabazz was up next, with a majestic yet, again, all too short act: appearing as an intimidating cloaked, masked entity, they strode through the hushed auditorium up onto the stage, shedding the cloak to emerge as an astounding feathered magician and dance with ferocious intensity for just a few moments before blowing dust over the crowd, leaving us desperate for more of this enchantment. I was shocked, rocked, I felt I had glimpsed something vast, something outside of space and time.

Finally, New Orleans bounce star Big Freedia played a full and generous set, and for much of it welcomed members of our ‘off-world assembly’ crowd up onto the stage alongside her and her gorgeous dancer Tony for an extended celebratory laughter-filled extravaganza of twerking. Twerking is a big part of Big Freedia and Tony’s philosophy and practice, and the Brownton Abbey crowd were happy to have a masterclass! We were euphoric, blissfully dancing and chanting along at full power to favourites including ‘Rent’. Freedia’s farewell involved an extended homage to Whitney Houston, with Freedia singing ‘I Will Always Love You’ as she walked through the crowd, touching the hands of just about everyone in the Mothership in turn as she meandered away, leaving us blissed out, giggling and feeling charged with optimism and renewed possibilities.

The event producers and their team of associate artists created a beautiful, nourishing Afrofuturistic space that I hope will become a recurring feature in the cultural landscape of Brighton and far, far beyond.

If you are interested in learning more about Afrofuturism and the ways in which it can support the generation of just and habitable worlds, check out Visionary Fictions, ONCA’s summer sci fi-inspired programme of events and installations, and come to our Collaborative Future Fictions symposium on July 5.