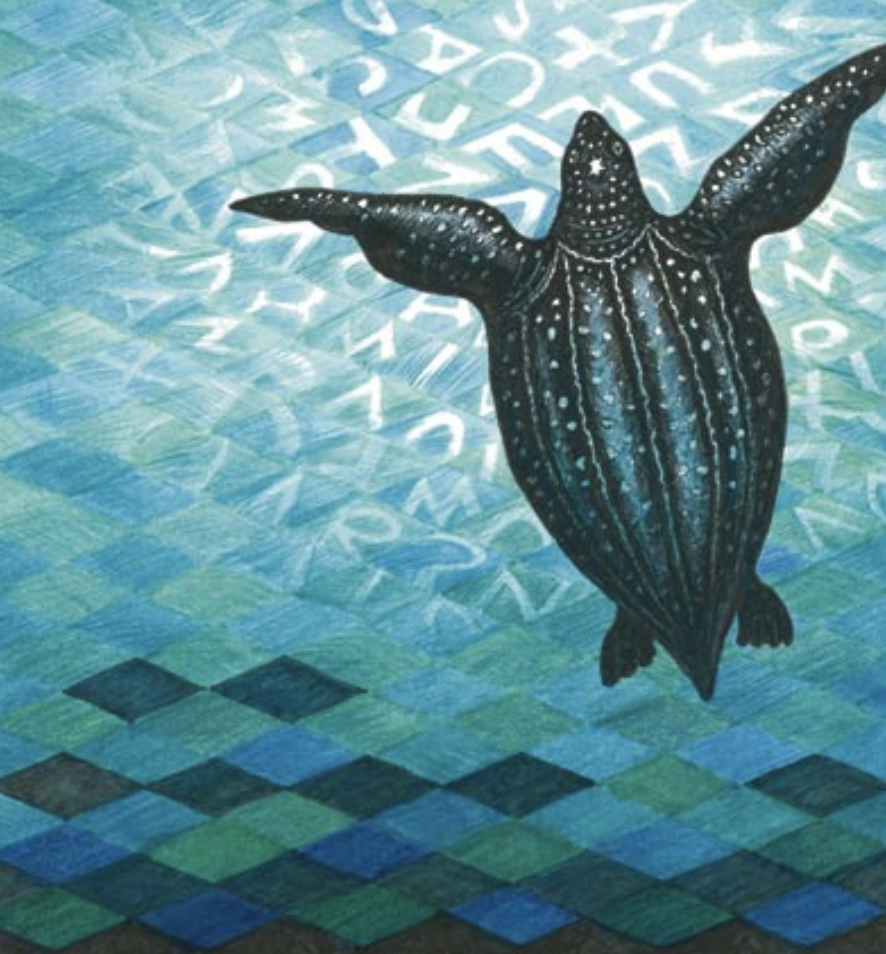 Review: Words the Turtle Taught Me

Wednesday marked the first day of spring. It also coincided with something else that I look forward to – poet Susan Richardson’s visit to ONCA. We have been blessed by Susan’s presence almost every year since our formation as a fledging gallery. She has, like many of the artists we have grown with, held our hands along the way. Whether in the form of poems on the wall, poems in headphones, poems as she stands in front of us and speaks them from her smiling selkie-metamorphosing-heart. This week, seeing Susan Richardson reading from her new collection of marine-themed poems was the best way to celebrate the coming of spring.

Words the Turtle Taught Me is described by Philip Hoare as ‘vital, glorious, salutary’. The collection is gorgeously and sensitively illustrated by Susan’s long-term collaborator Pat Gregory, and published by Cinnamon Press. It marks the completion of her residency with the Marine Conservation Society. Throughout 2018, Susan will be performing work from Words the Turtle Taught Me on her Thirty Coastal Readings for Thirty Threatened Species tour at venues all round the coast of the UK. We were honoured that ONCA was one of them.

Susan took us on a journey with the sea creatures that she has been researching, watching, celebrating and mourning. We dived from the deep ocean of the ‘monstrous’ frilled shark, its status near threatened, to the shallower waters of the critically endangered European eel, all the way into the afterworld where the extinctions of the moa, golden toad and Caspian tiger live, and where the common skate may soon end up. Susan taught us the ‘Plibble’ language of the European sea sturgeon, collected coloured plastic along the beaches of west Wales, and took us playing with the porbeagle shark.

Words the Turtle Taught Me feels different from Susan’s other collections, and this visit to ONCA felt different too, although no less powerful or affecting. Her work has previously been fuelled by myth, shapeshifting, stories of regeneration and rebirth. These new poems however seem – to me at least – to sit apart, fuelled instead by the darker realities of the times we live in. A single google on the state of the oceans will do that, let alone the years of research that Susan has been undertaking. Words the Turtle Taught Me is an elegy to Susan’s deep-seated belief in poetry’s power to change hearts and minds, to raise awareness for such pressing conservation issues as plastic pollution and overfishing. It is also, however, an expression of great loss. Throughout her words, humanity – often toxic in its many forms – is pitted against these creatures and their now fragile ways of life, against their ‘inhumanity’, both beguiling and unsettling.

I will be reading and rereading Words the Turtle Taught Me many times over the coming months and years, not least in an attempt to learn the language of the sturgeon. Susan’s poems are a call to arms, a way into the plight of creatures oft forgotten and overlooked by land-dwelling humans. Creatures without hair, without nails or fingers, creatures with cold blood and slippery skin, creatures we struggle to anthropomorphise. But her words can also be taken as the beginnings of a road map, giving us something bright to hold on to amidst even the deepest of losses.