The Purpose of Art

Over the past few years, I’ve come to appreciate the idea that art need not have any purpose or “true” meaning.

I can enjoy films and music for their aesthetic value without having to really understand them. I can accept Roland Barthes’ theory of the death of the author, and love texts by Shakespeare and Ben Jonson without being putting off by their ethics or outdated social views. On a less philistine level, I can still consider the Harry Potter books my favourite inanimate objects in existence while finding J K Rowling’s constant spew of supposedly canon nonsense and social media wars embarrassing beyond belief.

Being at ONCA however has opened my eyes to the other side of the coin. I haven’t wavered in my belief that art need not have a purpose, but I have found a greater sense of appreciation for art that does. Previously, when I considered “art with a purpose”, my mind went to fast food marketing and big-budget movie franchises; essentially, purpose was synonymous with “making money”. But my time here has revealed to me the multitude of purposes behind the creation and the appreciation of art in so many forms. I can consider it in terms of mental health and therapy, in addressing crucial world issues from climate change to refugees, in uniting those disillusioned by the state of contemporary politics and turning that pessimism and frustration into hope. I can value art for its ability to challenge prejudices and privilege by making people think critically about the world they live in, and for its ability to bring comfort to people who feel alone, without hope and incapable of articulating that pain.

In my first week at ONCA I helped out at the Grenfell Tower Fundraiser and was struck by the energy and the emotion that came out of that space as a result partly of the horrific event we were engaging with but also of the fantastic spoken word and live music being performed. The variety was refreshing too, from Subira’s powerful anti-racist and feminist slam poetry, to Bill Whitney’s hilarious but thought-provoking “Haikus about crap jobs”. The artwork (and I refer to “art” in its broadest of definitions) I experienced that night was about bringing a group of angry and upset people together, nurturing that frustration, and turning it into something resilient, political, practical and hopeful. 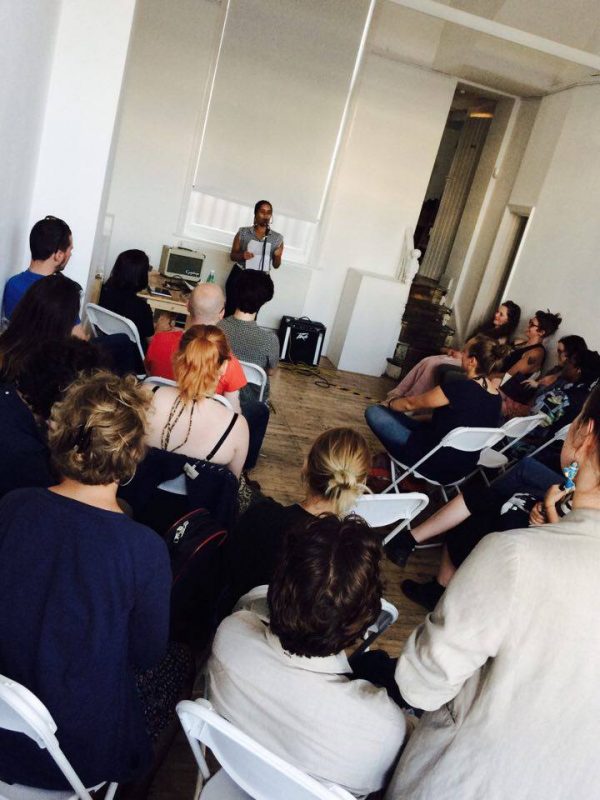 On a totally different note, I got to co-lead a Q&A session the following month with the artists and organisers on an artist residency called Bee Time. The extraordinarily unique residency aimed to introduce artists to environmentally-friendly bee-keeping practices, and to address the nature of bees and bee-keeping from all different angles: biological, philosophical, psychological, artistic and spiritual. One of the many aims of the residency was for the artists to find new ways to address the problem of declining pollinator populations, and of harm to animals in general, through their varying mediums, from visual art to poetry to performance. 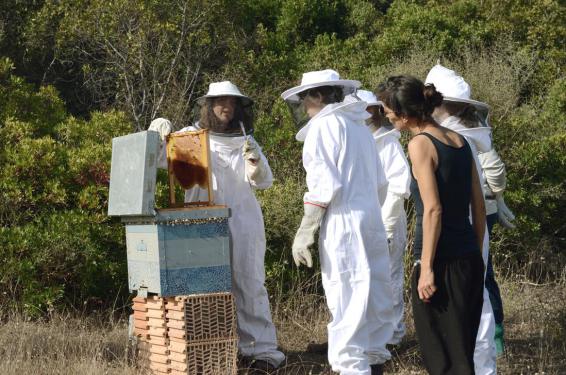 Another thing that has come across my radar since being at ONCA is the engagement the Deaf community has had with the art world. One example is Omeima Mudawi-Rowlings’ and Miranda Ellis’ ‘Eye2Eye’ exhibition here in June. The artists used textiles and fused/cut glass respectively to explore in part the different modes of connection between Deaf and hearing individuals, Omeima herself being Deaf and Miranda being a professional sign language interpreter. 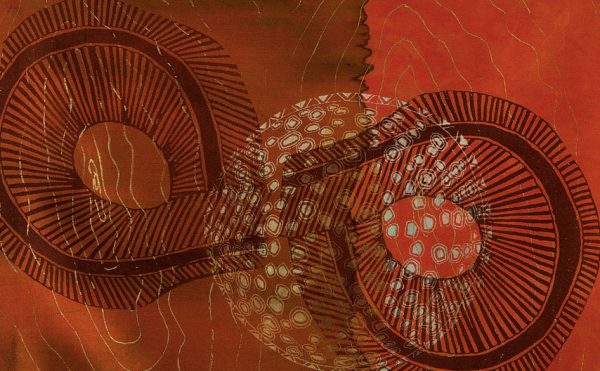 Artwork from the ‘Eye2Eye’ exhibition

More recently, ONCA staff and associates welcomed BSL (British Sign Language) teacher Kwame Afrik and facilitator Louise Gibson to our Cultural Emergence sessions: workshops designed to improve communication between people to impact social and environmental change. Kwame and Louise are both Deaf, and so the session they inspired focused very little on speech or sound, rather on other ways we could communicate with our bodies. We used physical activities, improvisation games and basic BSL to communicate ideas and emotions, and in doing so I discovered how limited my assumption was that being Deaf could be only ever be a hindrance. My relations with BSL and the Deaf community (albeit still in their early stages) have made me realise how much of an important role the arts can play in connecting people with one another and with the world around them. 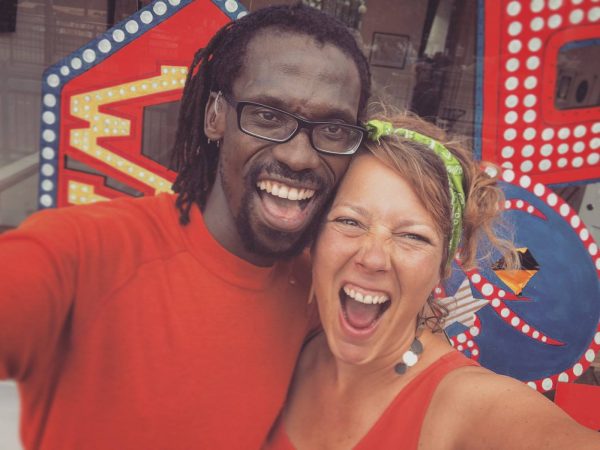 One of my most treasured experiences of being at ONCA was getting to conduct my first professional interview with an exceptional performance artist: winner of the ONCA Green Curtain Award, Jamal Harewood. We talked about his award-winning solo performance ‘The Privileged’ which used audience-led theatre techniques to challenge the audience’s ideas about racial stereotypes, identity and privilege. Jamal had a lot of ideas about art similar to my own, such as how meaning is generated by the audience as much as by the artist. (Although he had created the performance with race in mind, his use of a polar bear costume sometimes led audiences to interpret it as a critique of animal cruelty or global warming. “If they happen to think it’s about animal cruelty and why you shouldn’t go to a zoo then that’s what it’s about,” he told me.) But Jamal also had plenty of ideas to challenge my own. He critiqued traditional theatre’s tendency to place the performer on one level and the audience on the other, a system that assumes art is only ever there to be prescriptive. He rejected also the notion that there was an objectively right or wrong way to respond to his performance, in spite of its moral focus. 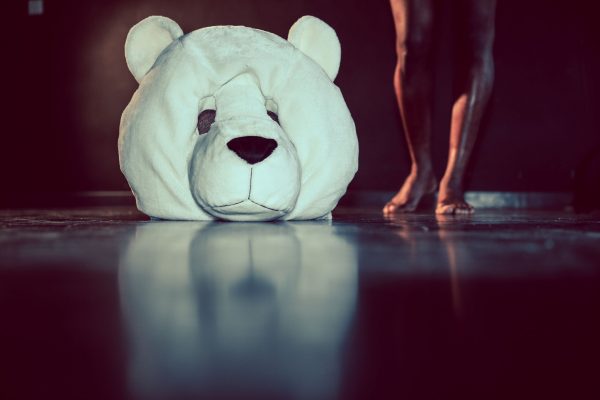 ‘The Privileged’ itself once again provides a purpose for art, this time in the medium of theatre. It provides a unique and innovative way of using art to ask questions, even if it does leave those questions relatively unanswered. It is a way of reflecting aspects of the world around us which many of us are not often confronted with, even if that mirror is angled and distorted.

Most recently, I was privileged enough to take part in photographing some incredible paintings by the late Michele Angelo Petrone which had recently joined our collection. Michele was a professional artist who lived with, and eventually died of, Hodgkin’s disease, a rare form of cancer. He used his artwork to express his emotional journey, and in doing so united and brought comfort to thousands of people living with long-term illnesses. Michele’s artwork continues to find a space for what many find so difficult to communicate and show them that they are not alone. 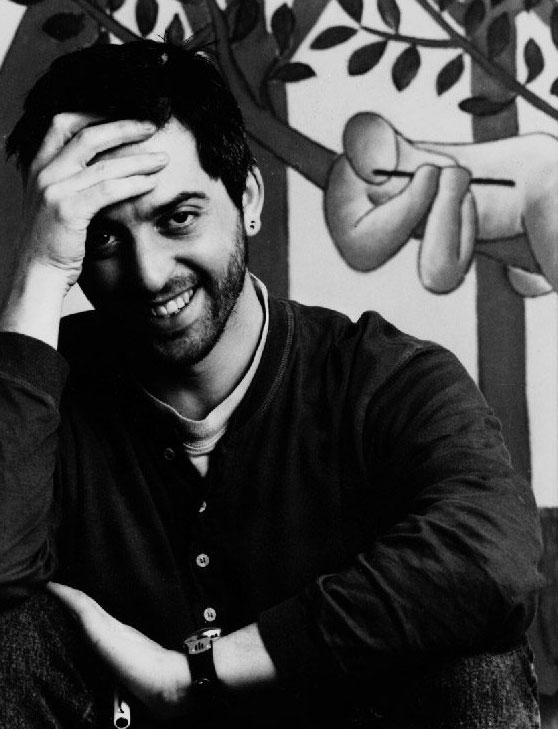 Michele’s legacy has led ONCA to collaborate with Brighton’s Macmillan Horizon Centre, running art workshops for people affected by and living with cancer. The creation of art can be both an escape from the monotony of treatment as well as a way of confronting issues and emotions surrounding illness in a healthy way. Michele’s legacy shows also that art about illness and by those living with illness need not be relegated to some lesser artistic form, for he was absolutely an artist in his own right making international success with his exhibitions, workshops and his book, ‘The Emotional Cancer Journey’.

Naturally, it has all been a lot to take in over the course of my short ten week internship, and the words I have written here only scrape the surface of one of the many lessons I have learned throughout my time here. To me ONCA at its core is about challenging our existing ideas and learning to see the world differently, using art in all of its forms as the focal point for that, and that is exactly what it has done for me. I’ve learned about environmental change, race, gender, illness, animal welfare, sustainability, disability, homelessness and loads more, as well as so much about the art industry and the practical side of running an organisation like this one.

I have so much gratitude for ONCA and I only hope they continue to do all the amazing work that I have been fortunate enough to experience this summer.

To Lydia, Lu-Lu, Persephone and Ellie; to ONCA founder Laura; and to all ONCA artists, collaborators, volunteers, trustees, members, patrons and audiences: good luck and – well, it’s definitely not goodbye.