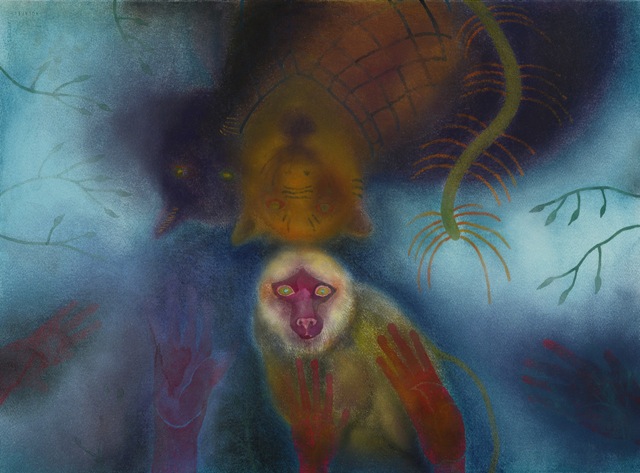 The Animal Nature and the Psyche – The Art of Jan Harrison

As part of our blog series dedicated to lost and endangered species in the lead-up to Remembrance Day for Lost Species, ONCA delves into the otherworldy work of New York-based artist Jan Harrison.

The words are Jan’s own as she describes the work. Dive in, and drift a while through the more-than-human psych…

Here, Jan describes her journey into art and her making process:

A lifelong kinship and identification with animals has helped me to express what it is to be here as a flesh and blood being. Since my earliest work in the 1980s, I have explored the interaction between the animal nature, both “wild” and “tame,” and the human psyche. Mysterious and intimate characters act within an inner landscape, similar to dreams.

My paintings involve personal feelings of various states of empowerment, and express the similar states and plight of the animal nature, as the planet and its inhabitants, in the face of extinction, struggle to survive, and want to live.

Since the very beginning, my art has involved a personal and universal myth, revealing the animal nature in ourselves and in the world. The animal beings are emissaries and guides. Their eyes invite us into their world. They embody an ongoing connection with the life force and the world.

The myth in my art is intuitively known in my body, and is not based on recorded mythology or specific dreams. Instead of illustrating dreams, my work comes from the same place dreams do, similar to “dreamtime.” There is a connection between my body and the various beings in my art.

In 1979 I had a dream: “I was walking by a river, and I came upon a bird. The bird was very beautiful and very perfect. I wanted to talk to the bird, but I didn’t know how. I picked the bird up, and held it in my hands, I noticed that around the bird’s neck was a tiny medallion. Then I looked down and saw that around my own neck was a tiny medallion….I touched the two medallions together, and at that moment the bird began to sing in a language I understood.”

I work on the floor, which allows my body to be closely related to the art. A metamorphosis occurs as I caress the surface, using pastels and ink on rag paper. As I rub the surface with my hands, the animal beings take form, and an intimate connection emerges. In addition, since 1979 I have spoken and sung in Animal Tongues, which I often do while working, and have performed in conjunction with the visual art.

The focus of my work is both personal and universal. To quote James Hillman, “I can no longer be sure whether the psyche is in me or whether I’m in the psyche…””

→ Two Artists in the Age of Pessimism: Interview with Alexis Rockman and Mark Dion
← Why don’t we grieve for extinct species?