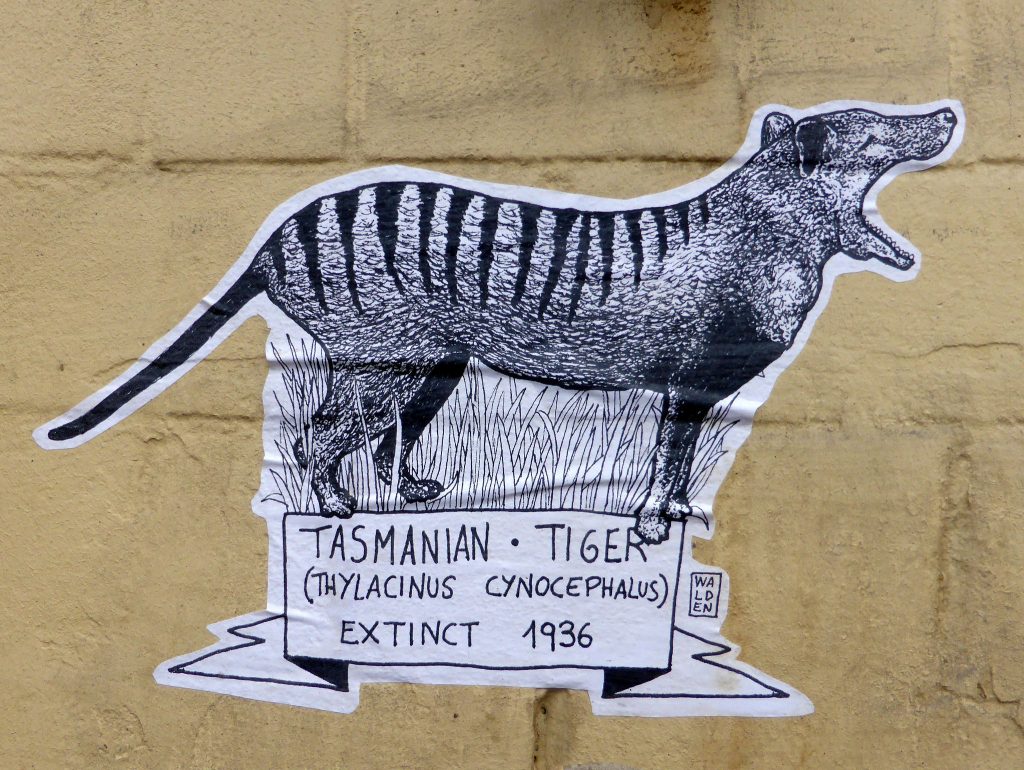 On the 80th anniversary of the extinction of the amazing, unique thylacine, we’re sharing this extraordinary poem by ONCA artist Susan Richardson.

We’re also launching a new schools outreach programme to share its story with children in the run-up to this year’s Lost Species Day. And tonight we’re co-hosting a tour of the lost species at Brighton’s cult Booth Museum, inspired by their stuffed thylacine.

Thylacine we miss you.

listed as critical. Was

i am virtually non- un- on

the brink of unique,

ceive a cairn of commemoration

i glimpse myself from the cor-

ner of my eye and

it was about ten metres away when I first noticed it. Sun was going down and I was stuffed after walking all day so I was waiting by the stream for Jase to put up the tent and make a fire and whatever the fuck else he does when he says it’s time to camp. Thought it was a dog at first – it was about the size of Jase’s sister’s Lab, the one that flobs all over you, kind of pale like a Labrador too, but then I saw the stripes, and its body looked weird – like heaps longer than it should’ve been. I was too freaked to move, just sat there, couldn’t breathe, couldn’t even reach in my shorts for my phone. And just when I’m thinking I’m so going to pass out here, it turns round and disappears into the bush. And soon as it’s gone, Jase comes over – took his fucking time – and says I’ve got the fire going, Soph. This place is unreal!…Aw, what’s up? You look like you’ve seen a

on the rock. They called me

i am thresh- flesh-

dwelling in the realm

there are fewer eucalypts

than there ever used to be.

Was i a clever fake? The proof

the bandicoot i toss

to see which way it lands,

the loss of my before

after. Yet as i dis-

with a phantom yawn a scream,

in the mud and


mate, I couldn’t believe my eyes. It was gone midnight, I’d skulled a few beers and was driving home over the Burrenbidgee. Parked by the bridge and got a pretty good squiz – it was standing there, ears up, tail out stiff like the tail of a roo – and then I thought I’d hop out the van and get a bit closer.  Mate, if I’d only had the three-oh-eight Winchester with me – guys spend years out in the bush trying to bag one of these bastards. Tried to film it on my phone before it shot through, but it was too shit-dark to see, so I grabbed my torch from the van and hunted round for a while and found what I reckon was a paw print. Soon as I got home, I googled it and, mate, I was

by the (un)conscious mind.

Whistle me up, make me limbo

see what you expect

hope grope to see. Am

of my hallucination imagination.