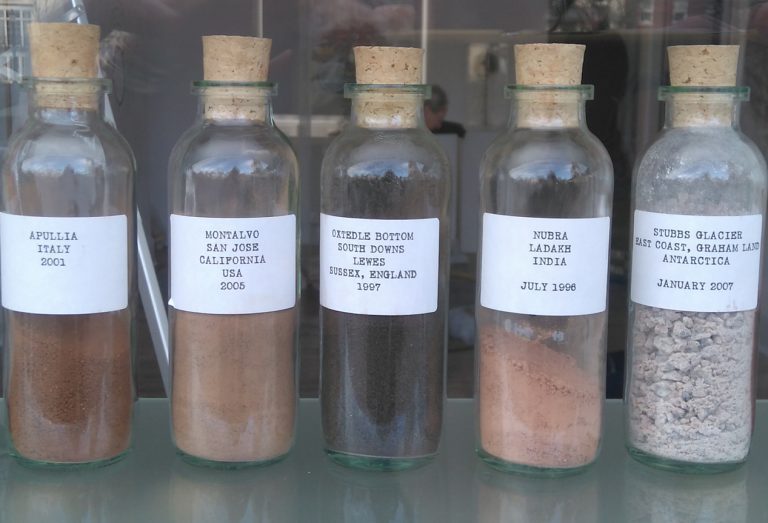 Chris Drury is a British environmental artist who has been making art since the 70s. He has worked in many places around the world, and his art reveals the essential qualities of the places where we live.

At EARTH at ONCA in March, I discovered some of Drury’s great works: photographs, earth prints, installations of collected earth from around the world and beautiful three-dimensional sculptures of mushrooms. One of the pieces on display was interactive, co-created by visitors to the gallery. EARTH was an educational art exhibition: it explored important issues such as climate change, the environmental effects of nuclear testing and radiation, and English agricultural heritage. It made me think about the role of artists in stimulating discussions on these issues with the public.

Chris recently collaborated with poet Kay Syrad and Cape Farewell on Exchange  –  a project about three organic farms in Dorset. Exchange will be touring the UK this summer, in the form of a beautiful large leather-bound book with poetry and prints of the research that took place on the farms.

It was an honour for me to meet Chris and to be offered the opportunity to write about it for the ONCA blog. I have studied art and shamanic practice, and I came across Drury’s work when I was preparing an art installation in my studio at New England house – an indoor zen garden.  His work, along with other artists such as Richard Long and Anthony Goldsworthy, has certainly inspired me. I feel that Chris is, in a way, a guardian of our earth – someone who appreciate the beauty that our planet has to offer. His work reflects a true sense of the essential, as though his concern is to document traces of life on earth.

Collaborating artist Daro Montag’s practice has also focused on environmental and ecological issues for many years. For EARTH, Montag shared a cyclical art project that emerged originally from his 2009 expedition to the Andes with Cape Farewell. RANE-CHAR uses biochar to help combat climate change whilst generating nutrients for our earth. The public is invited to actively participate in the project, burying char and adding to a map of soil regeneration, becoming part of the restoration process.

To read more from Laetitia Teteau, visit her blog.