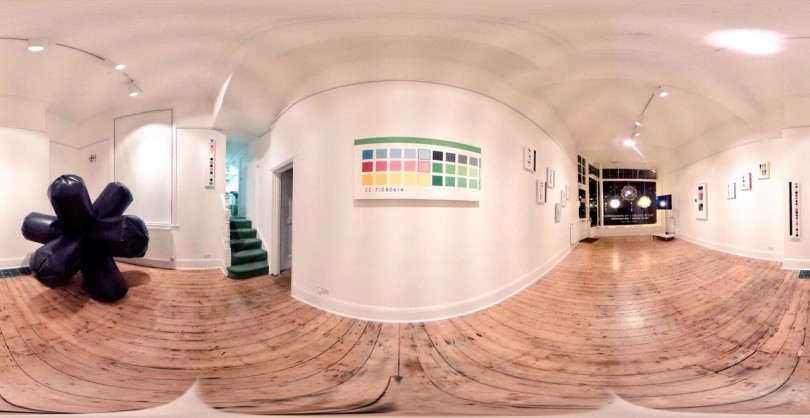 Trash or Treasure? – A Peripheral View

I was delighted to have the opportunity to show some new and recent work at ONCA, and to take part in some of the workshops and activities that took place during the week of Brighton Science Festival. The week was given the catchy title of ‘Trash or Treasure’: a week of enquiry into the use and misuse of plastic.

A couple of months earlier, I had met up with Persephone and Carrina from ONCA at my studio at Phoenix Brighton. We discussed whether or not I might be able to get involved in the week of activities – I have had a science background and have an ongoing interest in polymers. Naturally we also discussed my artistic practice and in particular my choice of material for painting – the smell of fresh resin in my studio was fairly noticeable and so an obvious area for comment and discussion. Experimental by nature, I have tended to place an emphasis on the possibilities inherent in a material. Predominantly, I have used polystyrene resins and other oil based derivatives. The choice of material has always been an issue that has exercised me, being conscious that it is the by-product of a very controversial and limited resource – crude oil. My perspective for the time being is that this precious liquid should be used carefully and wisely. Unfortunately, the opposite is often the case as polystyrene and other polymers are used for packaging and cheap throwaway goods.

Both Persephone and Carrina thought that my considered use of virgin plastic, whilst controversial, would provide an interesting angle to the ongoing debate about the use of plastic during ‘Trash or Treasure’. I too, hoped that this would be the case and also that my paintings might stimulate public interest in their own right. We agreed that I would exhibit some of my work at ONCA during the science festival and lead a workshop in the gallery on one of the days during half term.

I have several reasons for choosing to use plastic for my work, a material that seems appropriate for celebrating and reflecting the time period that we are currently living in – the ‘Plastic Age’. A few years ago I bought a secondhand record called Debut from a boot sale. It had a gatefold sleeve that had become unstuck to reveal the CMYK shapes along the inside glued tab. The colours, shapes and patterns were simple but compelling. Around the same time I started collecting the tabs from cereal boxes. I have always had a tendency to inspect and read the box whilst eating breakfast and had noticed these ‘peripherals’ before. They had always delighted me visually and like anything that is collected and observed regularly, small differences are soon observed and enjoyed…

… but they are remnants of the printing process, marginal, partially obscured or totally hidden by glued tabs. They seem to me to be perfect hard edged landscapes in their own right and they continue to be a source of inspiration. The paintings exhibited at ONCA were made from coloured polyester – placed, poured and painted onto board. They may celebrate these hard edged landscapes, they may comment on our use and misuse of plastic in our packaging. Whilst the paintings may have a subject matter, they become more than a painted representation, a copy or an illusion: the pieces are constructed and derived from a particular approach and a technique.

The work may be characterised by process: it may raise questions about the act of painting and making and the choice of subject matter, as well as the finished piece itself. I hope to produce something that becomes more than the sum of its parts and that might edge the viewer into a new place. The paintings have a very flat, smooth surface which may allude to photographic or print production processes. They directly contrast the notion of a hand crafted or painterly piece of work, with evidence of the artist’s handiwork almost absent.

It was great to meet and exhibit with Nick Sayers whose recycled Spheres and Zero Waste sculpture were also featured in the gallery. I also took part in the beach clean on the Saturday, an event that drew quite a crowd of people all keen to gather up plastic waste as part of the line transect study of a small section of Brighton beach. Whilst it was a cold and windy day, it was a positively invigorating experience.

The team at ONCA were very helpful, enthusiastic and accommodating and I wouldn’t hesitate in recommending the Gallery and hub. My involvement in Trash or Treasure has also meant that I have re-evaluated my own use of plastic materials and re-thought how I might cut down and re–use the small but still significant waste that I produce.