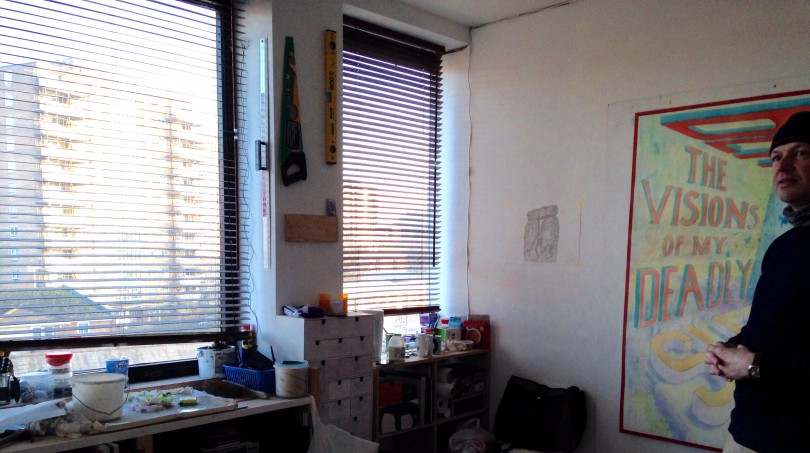 Mark Anstee is a multimedia artist based in Brighton whose diverse influences have so far included a military submarine, a neolithic monument and a post-industrial landscape. Anstee generously donated a piece of his work to ONCA’s recent fundraising exhibition, This Is Change. In that show, artworks were displayed without artist biographies in order to allow visitors to judge pieces on their own merit rather than an artist’s reputation. This also meant the participating artists were shrouded in mystery, and so our intern Sophie Wolfson went to visit him at Phoenix studios to find out more about Anstee’s practice… 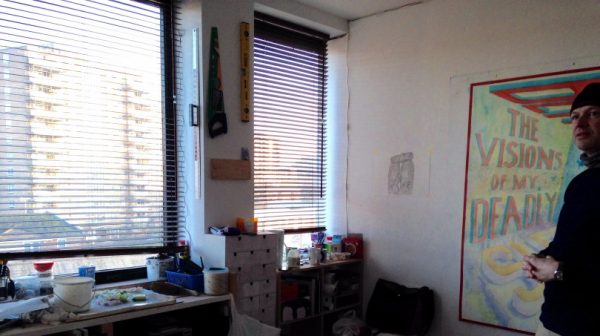 Back in 2007, Mark Anstee had a residency at an archaeological dig near Stonehenge. Archaeologists were uncovering parts of the ‘Cursus’, a monument believed to be even older than the Henge. Anstee became fascinated with this world class monument in the heart of the very English countryside.

“I was playing the role of a stereotypical English artist, sitting and drawing all day, very traditional drawings of the landscape and the monuments in that area. My performance as this English artist in this environment was very much part of the art project”

Anstee says his work is always site-specific in a non-invasive way. He wants to be influenced by the environment rather than to create artwork which changes the landscape to reflect his personal artistic vision. In this way Anstee is unlike many other environmental artists who seem to make it their mission to leave their own signature on a landscape.

“That has always been my approach. I want my work to be temporary and often pieces are destroyed after the exhibition period is over.” ‘Removed and Destroyed Without Warning’ was Anstee’s 2010 project where he built a large-scale submarine sculpture, inspired by stories of sacrificial WW1 military submarines which were sometimes abandoned with their live inhabitants still inside. The work was made to fill a large space in the Bluecoat Liverpool but afterwards it was dismantled and Anstee shows me there is just a single panel left over from the grand sculpture.

Transience, destruction and recovery are themes which Anstee keeps returning to. The piece he submitted for ‘This Is Change’ at the end of last year was a study of a transient space much closer to home, namely Newhaven Harbour, the area where East Sussex wind-farm is expected to be built. Tide Mills is an area of natural beauty near the harbour which was set to be destroyed with the expansion of the harbour in order to allow larger ship ships to dock and bring in building materials as well as more jobs. Some local citizens and environmental groups wished to preserve the area for its beauty and ecological benefits. The French port owner’s response was to set aside conservation areas for endangered reptile species whilst continuing their building plans for the rest of the land. Now those areas are cordoned off and identified with farcical signs which tell us that “Reptile translocation” is “in progress”. It was this bizarre image which inspired Anstee’s work for This Is Change.

“It just looked so outlandish. I’ve never seen any reptiles in that area and it seems like such a singular thing to focus on in this beautiful landscape”.

It was the signs themselves, these temporary monuments marking out an arbitrary square of wilderness, which interested Anstee most and so they became the focus of his observational drawing. Anstee has continued to explore transient spaces and monuments in his work and we look forward to his new projects being unveiled soon.

As part of ONCA’s FutureCoast Brighton project we are compiling people’s visions for the future. We asked Anstee to imagine himself recording a message from the future to his past self. What might the world be like and what message would he send?

“I don’t want to make too grand a statement about the future. I have so many visions for the future it would be difficult for me to choose just one. I also think it will take a very long time, say 1000 years for things to change in a dramatic global, way, by which time I will be long gone so it’s hard for me to imagine myself in that future. However, I can give you a wish for the future, something which isn’t overambitious. It’s a snow dome wish, small enough that I can carry it around in my pocket. I love seeing a derelict road where grass has broken through the bitumen. I enjoy that sense of recovery and of nature reclaiming the land. So that is what I would wish for the future – that some grey industrialised area that we have now gets covered up and reclaimed by nature.”

→ Behind the Exhibition: Nesting
← Artists in Residence: HOWL Projects