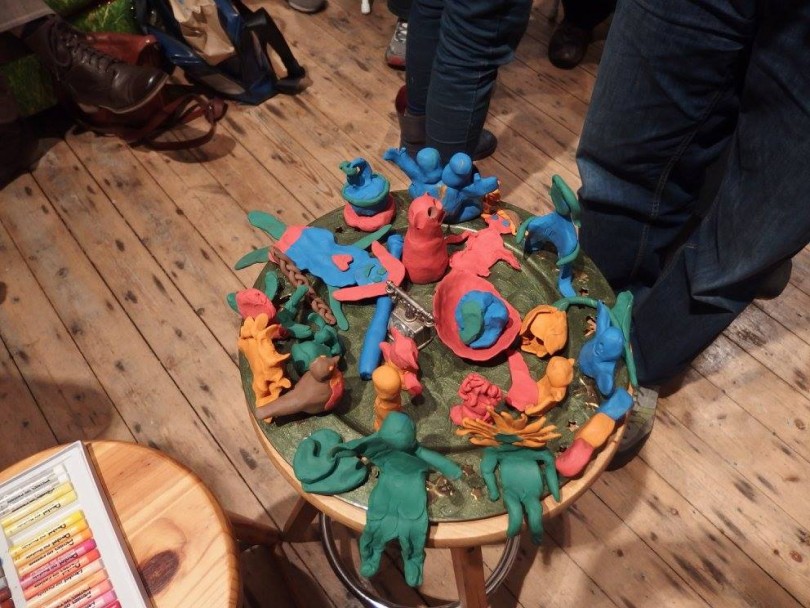 Transitioning to the future will require changes in the ways of doing, organising and thinking on personal and collective levels.

Within the ARTS project we are investigating front-runner cities across Europe and primarily focus on bottom-up, collective action: we investigate the activity of initiatives in transitioning to more sustainable futures during a period of hypothesised acceleration. In December, as part of our wider engagement of the city with our project we co-hosted a workshop with ONCA, a vibrant hub seeking to inspire creativity and positive action in the face of climate change.

Our hands-on workshop, Collaborative Futures, provided an opportunity for me (along with Florian and Rachael, from the Brighton ARTS team) to meet the people who make up local transition initiatives and explore possible futures. Both challenging and positive, we used a variety of materials to create personal and collective engagements in the future. In this blog post I recount the journey and reflect on the workshop in relation to the overall ARTS project.

Led by Annabelle and Ben Macfadyen and held at ONCA during their Festival of Climate Ideas and with 35 people participating, we began by creating little figures of ourselves out of plasticine. Next, we introduced ourselves in pairs (what occupies you?) and explored our future hopes and fears. Each partner annotating postcard answers which were subsequently hung on a multi-coloured canopy as the backdrop of the workshop. From a range of images we then selected visual representations of our hope for the future before exploring in groups the connections between pictures, our expressed futures. Geese in flight, Nepalese prayer flags and a tranquil garden, were connected – at least within my group – by the idea of ripples: the influence of one thing on another. Materially, we expressed this through ribbons, paper shreds and sticky-backed plastic. As a theme, relationships and interconnectedness also appeared in another group’s creation, this time in plasticine. Again, results (where possible) were hung from the multi-coloured canopy.

The workshop brought together a diverse range of participants. By design there was little space to explore the particular projects from which participants came, the Brighton and Hove Food Partnership for example, which we studied in depth earlier this year. Instead, what emerged were common themes between projects, an evolving shared understanding of what was needed and the challenges involved in getting there.

In the second half of the workshop we used our own bodies as the medium through which to depict a particular (desired) aspect of the city’s future. One of the most exhaustive body sculptures I witnessed was a traffic-free future between Brighton central station to the north, the beach to the south and the east and west piers. Other equally challenging body sculptures depicted expressions of rich biodiverse ecosystems and thriving cooperative enterprises. Then, in the final stages of the workshop we were transported 40 years into the future, to the year 2055, to reflect on progress made (‘having made it’ (yay!)) and provide advice in the form of ‘voicemails from the future‘ to ourselves in 2015 (our plasticine self-images now representing us in 2015). By the end of the workshop we had transformed the multi-coloured canopy into a futuristic mobile, each strand relating to a participant with our collective material expressions hanging in the centre.

Being propelled into the future to provide advice for the ‘now’ was reminiscent of techniques used by transition scholars. In particular, the idea of developing collective (socially constructed) and widely shared visions of sustainable futures which then function as a framework for formulating short-term objectives and next steps. And yet our results felt somewhat different. Common future themes were expressed – more participation, diverse thriving communities – but concrete actions were side-stepped. As a consequence, messages focused less on the steps needed to deliver ‘the vision’ but on conveying motivation, inspiration and support ‘to get there’. Moreover, the process provided a clear reminder of the multiple potential transitions underway and the variety of values that might guide us.

The workshop formed the third and final component of FutureRoots, our current collaboration with ONCA, inspired by FutureCoast, an online game involving voicemails from the future created by US-based experience designer Ken Eklund . The two previous components included collecting voicemails from the future from local initiatives working towards sustainability (available online here) and a prior workshop, which explored new forms of evaluation based around the idea of thrivability. Together they formed our exploration of cultural and artistic reflections on sustainability transition processes here in Brighton. Together they have provided an interesting and inspiring engagement with how bottom-up sustainability transitions are perceived, what transitions might mean for people, what motivates them and how they engage with such processes.

Looking ahead but to the near future this time, I am excited by the prospect of convening workshops with local initiatives in the spring. Here we will explore reflections and insights from the project so far and seek to co-create strategies for acceleration: to seek ways in which to support and scale up current initiatives and the city’s progress to a sustainable future.