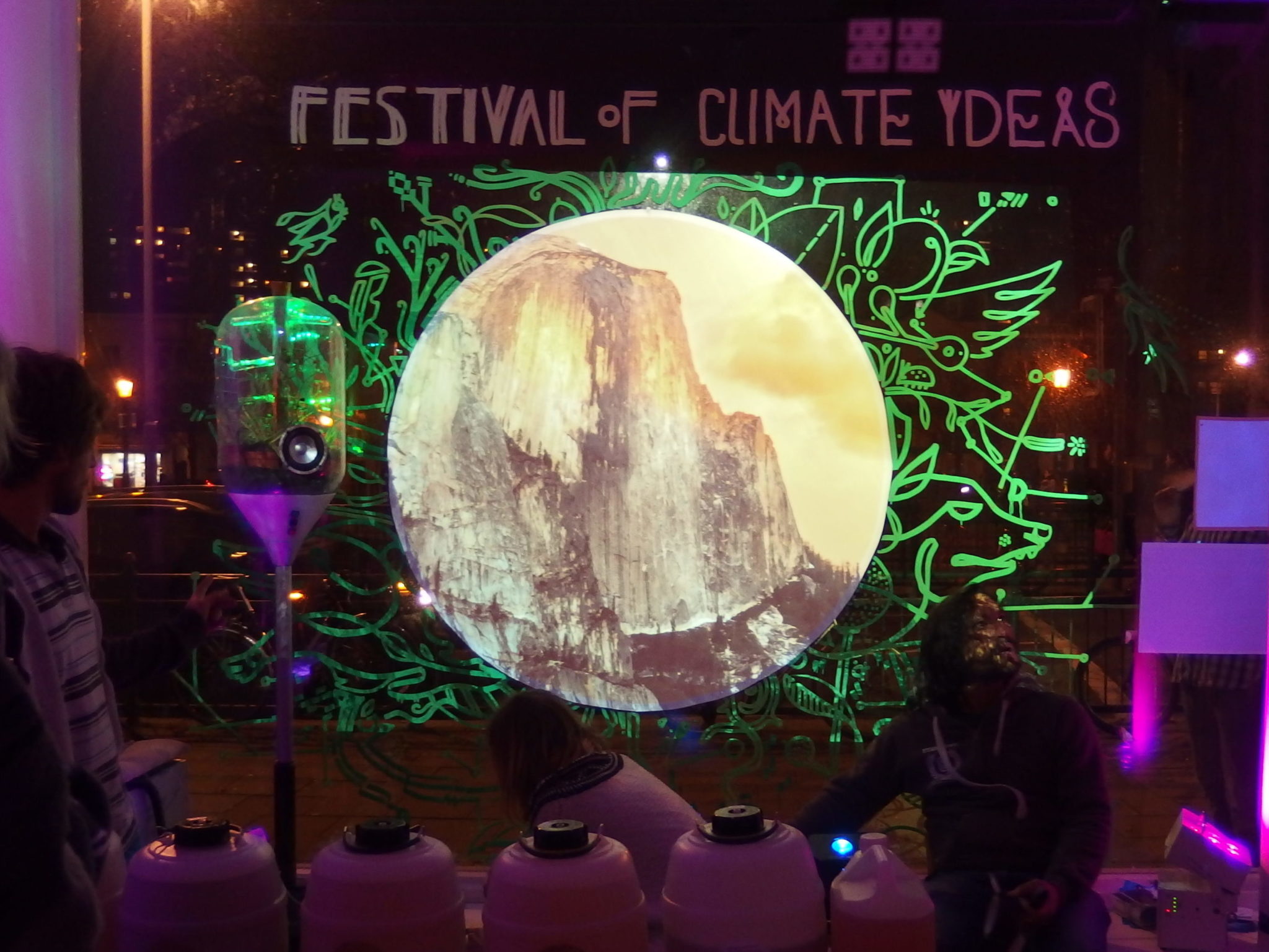 During COP21 in Paris, ONCA ran a week of events, talks and workshops exploring ideas about climate change.

FutureCoast Brighton and FutureCoast Youth: As part of a global digital storytelling project about the effects of climate change, ONCA and University of Brighton Media Researchers ran innovative projects that asked participants to imagine a range of possible futures through play. ONCA also collaborated with the ARTS Project– an EU initiative hosted by SPRU at University of Sussex – on FutureRoots, capturing voicemails from people running extraordinary grassroots projects in Brighton. Inspired by Ken Eklund’s FutureCoast game, ONCA created the FutureBooth where players record their own ‘voicemails from the future’. The FutureBooth is a specially modified phone booth situated in the gallery. Phone 07940 954541 to leave a message.

Climate Chambers: In ONCA’s basement and crypt, artists Ellie Liddell-Crewe and Alexa Povey create spaces for the difficult feelings that climate change arouses.   The bedroom: Is the world that humans are making sometimes too frightening to face? Do you ever just want to make a den or hide under the duvet?   The altar: In a secular scientific culture, can prayer be a valid response to the climate crisis? What is it like to kneel and ask for help? This installation is part of Climate Chambers, a longer term investigation by Feral Theatre into climate change and mental health.

Monday November 30th: Toll the Lost Species Bell. In a simple ritual outside the building, we tolled the newly-cast Bell on Remembrance Day for Lost Species. This was followed by a conversation in the gallery on biodiversity and climate change. 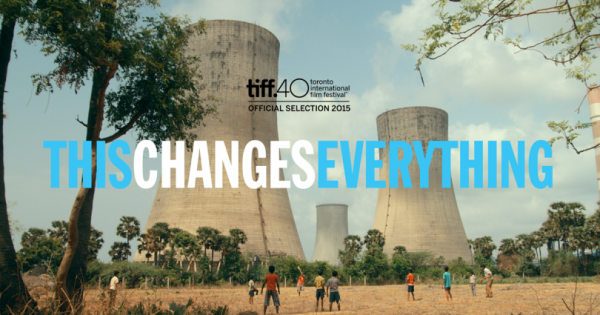 Tuesday December 1st: ‘This Changes Everything’ dir. Avi Lewis. Screening by Brighton Radical Film Festival. This popular screening was followed by a discussion of the film and the wider impact it is having on attitudes towards climate change.

Howard Johns, author of ‘Energy Revolution’ is an energy engineer, entrepreneur, business leader and activist who founded Southern Solar and Ovesco renewable energy cooperative. Howard is convinced we have all the technology and money we need to implement the climate and energy solutions we need. Duncan Blinkhorn is a Brighton-based cycle activist and founder of Brighton Critical Mass and the Bike Train movement. He travelled to Paris as part of Time to Ride but before he left he came ONCA to discuss with Howard our current energy predicament and their expectations for COP21. Followed by Film Screening – Just Do It.

This event was part of FutureRoots.  Bridget McKenzie is a researcher and evaluator of cultural and ecological initiatives. Bridget is frustrated by standard thinking about evaluation, which either assumes economic goals for success or seeks to show that you haven’t wasted public money. She wishes to develop a new, more integrated and positive framework for evaluating cultural and ecological practice. The key concept of the framework is thrivability, aiming for more generative, biodiverse, mutual and creative communities. At the workshop, we explored the definition of thrivability, and discussed how we can use evaluation to better advocate and spread our practice. 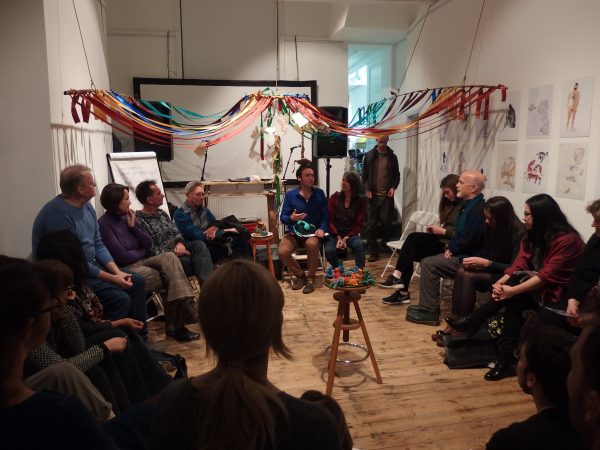 This event was part of FutureRoots. This workshop was aimed at anyone working towards sustainability, equality and social change, or simply anyone with a vision for the future.

How can we acknowledge both the challenging and the positive possible futures, and relate to them with creativity and resilience?  How do we move towards making the Brighton and Hove we want to see, and what can we learn from each other along the way?  In this collaborative workshop, Ben and Annabel drew from Joanna Macy’s Active Hope process and used materials to inspire visitors to look for positive steps we can take in the future. Over the two hours, we assembled a web of ideas across the ONCA gallery and created connections between our individual visions. Annabelle and Ben are collaborative artists using performance and visual art to build community and engage with themes of social change and sustainability.  They both trained as ‘Be the Change’ facilitators and bring their shared passion for creativity and positive change from across generations as mother and son. 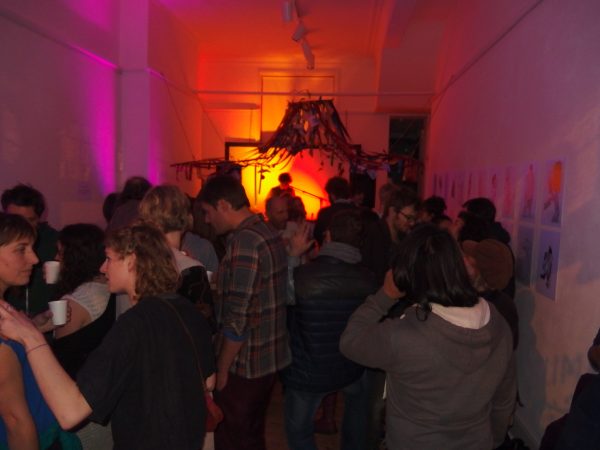 Cosmo is a multi-instrumentalist, composer and producer whose work is concerned with play, nonsense and the sonorous environment. Cosmo composes for film and theatre and tours internationally, performing solo and with several bands including Johnny Flynn and the Sussex Wit, and the Gentle Mystics. Based in London, he has composed music for the Young Vic theatre and for children’s hospitals and hospices. He has released a single and an E.P. on Transgressive Records and is currently recording an album.

Other acts included Keith Ellis and the Clarinet, and Amy Brangwyn.

Make a botanical garden out of cardboard. Free workshops for all ages. Artist Davide Di Taranto transformed the gallery into a cardboard botanical garden complete with flowers, insects and soil microbes in celebration of World Soil Day and all things soilish. As we cut and stick, we talked about how healthy soils protect climate and are the foundations for flourishing ecosystems.

7.30pm: Somehow by this Darkness – a solo play without words by Rachel Porter.   In Somehow by the Darkness, sexuality is explored as an ever–present influence on the soma of popular culture. Codified movements are examined, magnified, expanded and pushed to extremes.  Shadowy aspects of the feminine are given permission to emerge.  A woman is gradually pulled down from the lofty mantle of her heeled strut. What happens when she meets the ground – when the earth seeps in?  What happens when the goddess calls? Actor and director Rachel Porter co-founded Feral Theatre in 2007 and devises and directs with Feral.  She has created and toured two other solo shows: Papusza and Songs for Waiting.

Sunday December 6: Climate Change Theatre Action Climate Change Theatre Action performances.  In collaboration with NoPassport, The Arctic Cycle, and Theatre Without Borders, ONCA became part of Climate Change Theatre Action CCTA. This is a worldwide series of readings and performances intended to bring awareness to, and foster discussion around, climate change during the months of November and December 2015, supporting COP21.  The main goal of the project was to invite as many people as possible, who may not otherwise pay attention to this history-in-the-making event, to participate in a global conversation. CCTA draws on the expertise and resources of local artists, while being global in scope and uniting multiple countries and cultures around a common issue.  As Elaine Avila, one of the co-organizers, notes, “Coming together to tell stories is one of the best ways we have to organize and educate ourselves, to feel and to understand.”  The collection of 1-5 minute plays, poems and songs by 50 writers from all six livable continents, curated by playwrights Caridad Svich, Chantal Bilodeau, and Elaine Avila has been made available to collaborators worldwide.

The Festival of Climate Ideas was part of Coming of Age, a UK-wide programme of events and exhibitions by artists and arts organisations responding to the climate change discussions that took place in Paris in December 2015.