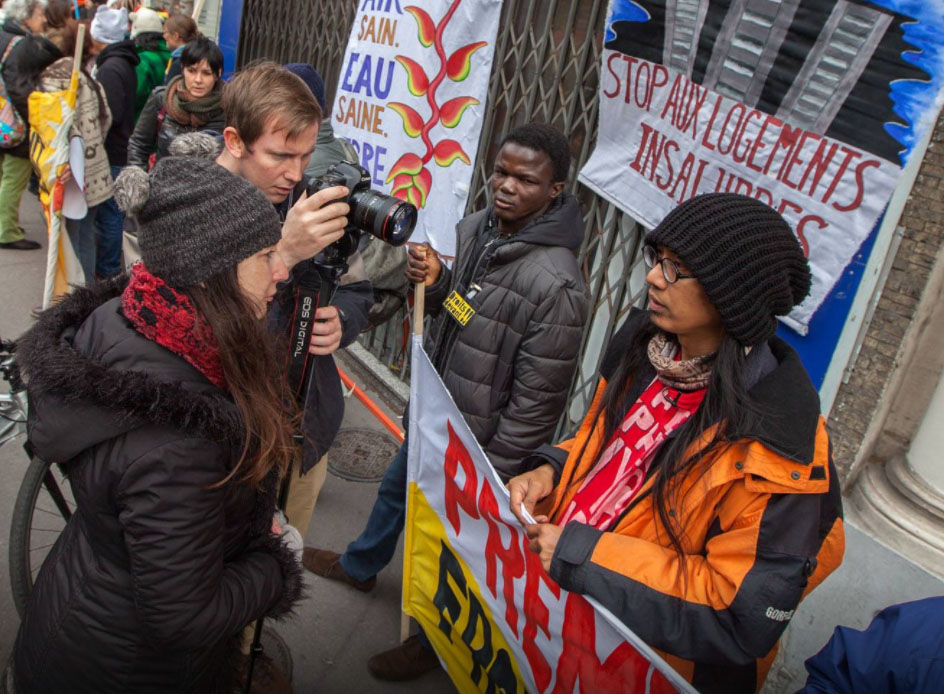 Think of Paris, city of love. With its outdoor, café culture of sipping coffee at small round tables. Romantic encounters with architecture, and visions remembered from novels and poetry, all brought to life during a pleasant stroll around the city. As well as the spirit of past revolution lingering on every corner.

What form will the new revolution take? And who will lead it? Recent calls from writers such as Naomi Klein and from the Guardian Keep it in the Ground campaign urge for a people’s revolution, to mobilise against government lack of action on climate change. Where are the arts in this revolution?

Swarms of artists are not unusual in Paris in any era, but the prospect of artists gathering in the city in one concentrated place, to make work, discuss politics and comment on economics, during the 2015 Paris Climate Conference (COP21) in December is one that international climate arts activist collective Forever Swarm

Just a stone’s throw away from the Gare du Nord railway station you will find Place to B, at St Christopher’s Inn a youth hostel combined with bar and co-working spaces, the HQ for new creatively driven revolutionary thinking. Place to B and Forever Swarm are working collaboratively on a provocative series of artistic interventions in the city of Paris for COP21, and bringing together artists with experts to generate a fresh approach to climate communications – a new climate story. Intervention themes include taking a look in the mirror at our hyper-consumerism, sparking a step change in more inspiring and creative communication on climate change, re-visioning a radically better future worth fighting for, and calling on artists, musicians and creatives across the globe to join this call to arms.

From November the focus for the future of global economics and action on climate change will be on COP21, the 2015 Paris Climate Conference. COP because since 1994 this conference represents the United Nations’ Conference of Parties and 21 because this annual event has been held an astounding 21 times across the globe already.

In previous years COP meetings resulted in significant developments including COP3 where the Kyoto Protocol was adopted, COP11 where the Montreal Action Plan was produced, and COP17 in Durban where the Green Climate Fund was created.

Hailed as the most disappointing conference, the COP15 event in Copenhagen in 2009 failed to secure an agreement to succeed the Kyoto Protocol and has since resulted in various countries producing the highest levels of carbon emissions since records began. We are the first humans to ever breathe these levels of carbon dioxide on Earth.

Many scientists, activists, economists and environmentalists believe that the Paris COP21 event is the last chance to reach agreement on worldwide government action to reduce emissions of greenhouse gases by 40–70% below current levels by 2050.

Projected outcomes of COP21 are that governments will not be required to sign any legally binding agreements at the event, and that there will be no agreement reached to keep emissions below the 2 degree warming limit but those present will need to pledge to working on four key factors:

So when you think of Paris in the coming months imagine Paris full of love for the Earth, our shared home. Think of Paris alive with the beginnings of a re-think of everything, and a long awaited swarming of artists to help us light the way.

Watch this space for more information on ONCA’s own ARTCOP21, 30th November-6th December 2015

→ FutureCoast recordings from the FutureBooth
← Interview with Photographer Zoe Manders