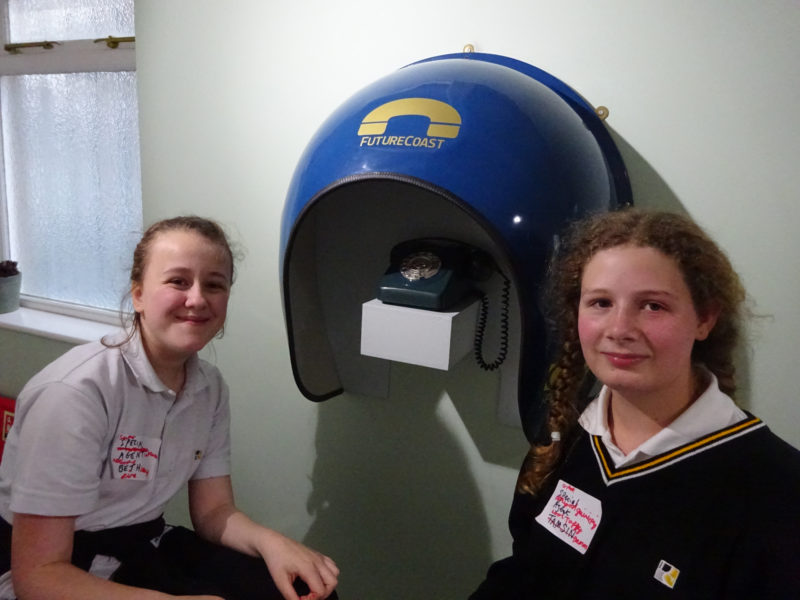 As part of a global digital storytelling project about the effects of climate change, ONCA and University of Brighton Media Researchers ran FutureCoast Brighton and FutureCoast Youth – innovative projects that ask participants to imagine a range of possible futures through play.

ONCA also collaborated with the ARTS Project– an EU initiative hosted by SPRU at University of Sussex – on FutureRoots, capturing voicemails from people running extraordinary grassroots projects in Brighton. Inspired by FutureCoast – an innovative online cli-fi game created by US-based experience designer Ken Eklund – players record their own ‘voicemails from the future’ via the FutureBooth – a specially modified phone booth.

I’m living in 2015, almost 2016 and um quite a lot of what we do is on technology. We do our shopping on a computer or our phones we contact on our phones so we never write a letter anymore. And lots of entertainment is on, like, a television rather than in a theatre.

Hi it’s Ali. Ali from Norfolk. It’s a message for Keith, its Ali. I’m sorry, I’m sorry mate I’ve had a bit of a bad afternoon you know I’ve been struggling with my depression. I get cross, get angry. I got angry today with the leader of the block. Yeah I called her a uh I called her a beefeater so uh I don’t think I’m going to go back there anymore. I don’t care anymore but um the energy is off till tomorrow so I won’t be back on grid till tomorrow. There’s no more rice anyway. We’ve got locusts and um yeah so we’re skinny as polar bears mate, we haven’t got anything to eat. So I went to the block leader and I was asking for some uh rice because you know I needed some because I gotta eat and she said she wasn’t going to open the door she wasn’t going to open the door anyway because of methane and she said she was going to save her air filters and she wasn’t going to see me anyway and she called me an idiot. So I told her to can her methan and that’s when I called her a beefeater. Um yeah I don’t think we’re going to get any more credit from them. Um unless you vote and then you might have to vote another party in. But um yeah anyway I don’t know. You’ve got all that on your plate and you’re just going to have to deal with it. I think you’re going to have to vote yes in next election if you want more credit. Anyway you know what they say mate, keep your hood up it’s going to rain!

I’m still here at the nest. A little quiet place which nobody knows about. Um I don’t know if you remember I told you about where it was. There’s a bottle underneath the third oak tree dug about three feet deep, there’s a small piece of paper there and it tells you where we are. Um the phones have been down for weeks now but I’ve just found a patch where we can actually make communication. Um we’re managing to grow a lot of food even though the rains seem to have washed so much of our agricultural soil away. It’s been really difficult but we’ve managed to keep some and uh we’ve been reproducing it and conserving it in the nest. Uh anyway you know where to find us and uh I think that uh well I just don’t know what is going to happen, it’s so hard without any communication channels open anymore to really know what’s happening. But I’m hoping you’re still where you said you’d be ‘cause we’ll always be here and um I hope that we’re going to meet again at some point soon. I love you. Goodbye.

Hello? I don’t know if anyone can hear this message uhhh uhh we’re not quite sure of the year we’ve uhh been on the road on the move for uhh I don’t know, at least maybe three years it might be 2040 something. 2048? All I know is that if there is anyone out there who can hear us we have last made camp here is Bexhill and uh just if anyone is there do not go to Brighton do not go there uhh they’ve been there they’ve come and it’s just we have to keep moving we have to oh god sorry bwahh (static).

Life is Tough but we are Free

We’re living in Lewes in an edge community in our park but due to climate change and global warming sea levels have risen and we’ve had to move to high ground with many others who have moved away from Lewes which is underwater. Uh we’re growing food, managing to eat our basic needs. Um life is tough, hard but we’re free and many of the people who were living in the towns are now living up on the downs, forming small communities and villages and um life is very different from 20 years ago. Um we still have some of the technologies, we still use mobile phones. We managed to get solar panels and wind turbines in place so we’ve got power um but our lives are very different now. We travel across short distances um we use cycle paths to cross the tops of the downs and um yeah in many ways life is better, a lot better. A lot of damage has been done, a lot of land has been lost because of the rising sea levels and many species entered into extinction so there is a sadness in what we are witnessing but also a hope. Yeah it’s an interesting place, the future.

Skills in the Art of Living

I’d like to see a future in which the education system helps people to better informed lives in which they can think for themselves in which they can think for themselves and take responsibility for their actions. Where they are educated to understand the effects their actions have on the world and the effects that the external messages of the world have on them, from consumerism to the media. The education system would also prioritise the need to help develop skills in the art of living, including: carving out a strong sense of personal identity, to appreciate life, finding the things that truly make them happy, having the resilience to deal with life’s ups and downs.

Hello, it’s 2065. I’m 98 years old and… I live in a bit of a wreck. I used to live in a town that had heart, shops, children, schools and when the sea level rose first of all its was just the floods which came two times a year, two, three times. Anymore, there’s nothing. At twenty years ago I had the shed in the garden turned into a boathouse. My mother, she’s long gone. She um she had a house in Norfolk. She had a sea view for her last few years and the water kept coming. Most people round her died of malaria anyway when um well… the dogs got doggier and the mosquitoes got angrier and larger. Ah my children have long left. Well um what’s left of us went to the highlands a long time ago and I didn’t hear from them. When look up the hill… there’s one tree left.

Hi there, I’m um ringing to apply for the Royal Academy um MA. Uhh in 2015 it cost £5 but I see now six seven years on that it costs £120 just to apply. Will this fee be reimbursed on acceptance to the course? Um will it also help to cover rent, living expenses in London and also all the other, you know, materials and everything else that which kind of comes along with that? I know you can’t do full time work alongside the course but I was also hoping you could make an exception. You see I’m only on £25,000 a year and I uh I have to commute all the way from Bradford. Um but yeah just let me know. Thanks very much, cheers, thanks bye!

Perhaps That’s Where All the Bears Went

Uh so yeah it’s great uh great weather today for rock climbing because there’s so many more rocks and sort of faces of cliffs and other kind of crazy terrain this year. Uh we’ve been able to do some really fantastic climbing up and down uh and getting really sort of crazy with the hanging off different rocks. Um just looking down into the chasms but it’s really weird, we don’t know what’s down there uh but we’ve heard some weird sounds so uh perhaps that’s where all the bears went.

Will Revenge for the Humans Race!

45,000 years ago I died! Yeah I died I died I died. And now I’m a ghost, ghost ghost! Ghooooooost. I will revenge for the humans race.

Hi there mum. Ahh uh we’ve run out of biodiesel and um I’m stuck in the middle of nowhere. Ah um I’m not quite sure what to do but um ah it means I’m running a bit late. We might have to hitch. Um yeah okay just I’ll keep you posted. Bye.

Nothing Changes Until It’s Compelled to Change (2065) (With Scream)

Hello. What I’ve learned in the last 50 years is that nothing changes until one is compelled to change. It’s… It was very hard to prepare for, we didn’t really understand. And the most important thing was cooperation, community, to learn how to genuinely live together and care for one another. And to be prepared. (Scream).