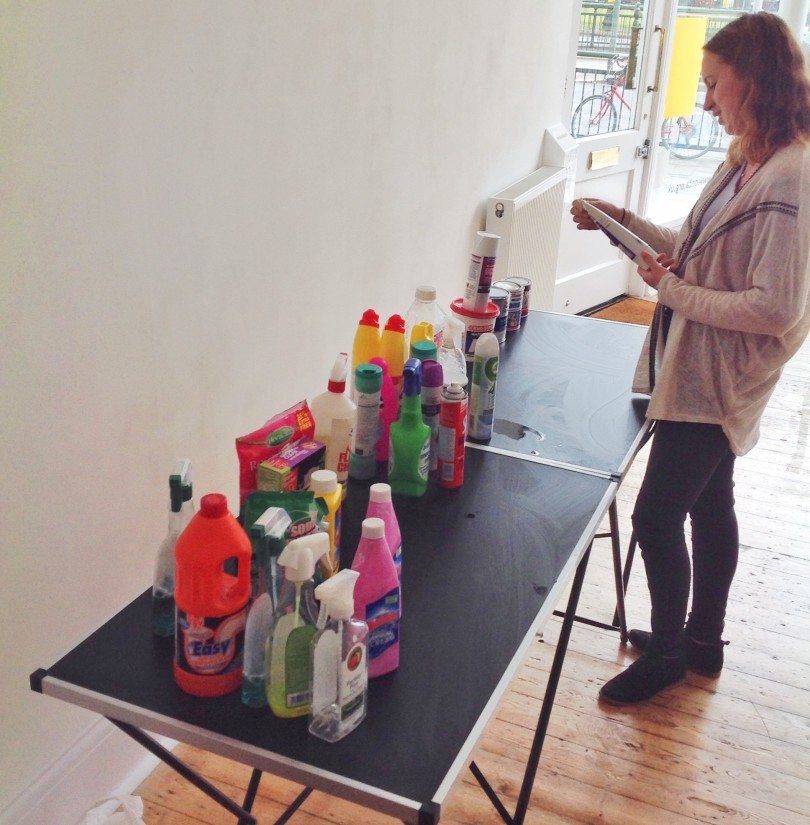 We Need To Talk About Chemicals

It is ONCA’s mission to inspire creativity and positive action in the face of environmental change. So unsurprisingly, we found it extremely unsettling to discover a stack of numerous harmful-looking products tucked away in many corners of the gallery and upstairs centre. We had to do something about this!

On Wednesday the 15th of July ONCA team members held a ‘chemicals amnesty.’ All toxic looking products were brought down to the gallery and we began researching them. Everyone started to look at the listed ingredients of these products (many of which are common in every household) and found out what they contained, and if these chemicals were harmful.

The general consensus was that most of these products contained harmful chemicals which can be toxic to the environment. They were perhaps not as bad as initially thought but we did notice however that most products are unfortunately tested on animals, with only a few stating that they were animal-testing free. Many manufacturers who want to use ‘new’ ingredients or want to make sure their product is covered in labels such as ‘germ killing’ are required to test on animals which normally they would not have to do. For more information on this, check out ethical consumers website.

The products we were most shocked by was the furniture polish and aerosol cans. One piece of research regarding furniture polish points to its usage being linked with poor mental health states, while they can also irritate skin and breathing. Therefore we have decided to put a ban on all aerosol cans. A homemade polish using ¼ vinegar and a few drops of oil instead makes for a much better alternative.

After further research and discussion we tried to think about what other alternatives could be used instead of these products. Some of the team suggested that white vinegar and soda crystals are really good for cleaning absolutely everything! This is an eco-friendly and cheap alternative to many big branded cleaning products. It was also put forward that instead of using shop bought air fresheners we could make our own room scent, for example crushing rose with lavender and bicarbonate of soda. This would not only be better in probably smelling better and more natural, but could also be just as effective and would not require using an aerosol.

After the chemicals amnesty I was quite taken aback by what we had found so I began to conduct my own personal research. I discovered some shocking facts not only about the household products I use at home and work, but also that very similar chemicals are found in some of the make-up brands I use.  I was completely unaware about the overall hazards my make up could be causing to my health. EWG’s Skin deep website is a great tool to get to know what it actually is we are using and putting on our skin on a daily basis. Some of the concerns they flag up include the risks of cancer, developmental and reproductive toxicity, allergies and immunotoxicity. They also rate these risks as high, medium or low for each product.

The message I wish to convey is for us to really carefully consider what we buy, what is has been tested on and whether there are any alternatives available.

→ Exploration to the Gyres
← Why Aren’t We Eating More Junk Food?