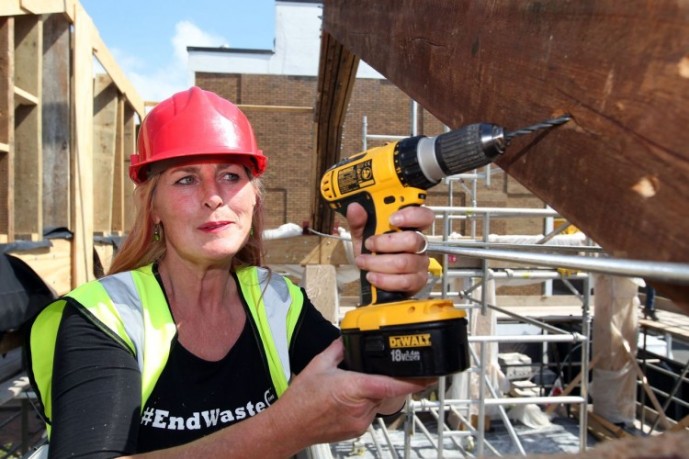 On Tuesday 21st July, I attended Cat Fletcher’s event ‘Conversation Cafe – Cat Fletcher talks rubbish’ at the Marwood Cafe in the Brighton Laines.  The event was run so that the people attending could engage with issues surrounding the themes of reuse and circular economy.

Cat Fletcher is the powerhouse behind the fantastic site Freegle, where people can arrange to give away their unwanted things to someone else who really needs or wants them, all for free! This is not only great for the people involved, but also the environment, as it means the object doesn’t go into landfill, or an incinerator.

At the cafe, the discussion was led by Cat who sprung some surprising facts on us. She told us that Brighton and Hove’s level of recycling falls greatly below the national average of 42% at a disappointing 25.2%. Considering Brighton’s Green reputation, I could not understand why this was.

Cat outlined some examples of where things are going wrong. At this years ‘The Level Summer Festival’ an event that you may have attended, 20 bins were placed across the park, but only a small minority were recycle bins. This seems rather ridiculous as the majority of things thrown away during this festival were plastic/glass bottles or cans, and despite attempts to save the situation, unfortunately most of this waste wrongly got sent to landfill.

When looking at the bigger picture, Cat mentioned that the nature of our capitalist society plays a big part in why our carbon footprints may be high. Since the 1970s consumption has risen, and we are a nation obsessed with buying new things. Before this, recycling had been prevalent throughout history in our society. In war times when people had little money, hand-me-downs and reused good were extremely common. It is only in recent decades that we have seen this surge in consumerism and a lack of responsibility from many people and corporate businesses who should do more to ensure their waste does not unnecessarily get sent to landfill. We have become a nation obsessed with ourselves and our lifestyles, not the planet!

So after this stimulating talk and discussion, I left the cafe with a slight feeling of anger towards contemporary societal values. It is human beings who are destroying our planet, and it is human beings who can save our planet. I think it’s important that we all do our bit in terms of recycling and reusing things and try to stop buying into a consumerist society. This is similar to the vision of Wangari Maathai, a woman very close to the heart of ONCA. She believed that everyone should do the best that they can, and while it may not look like a lot overall, if everyone has this attitude, then change will happen. if we all do our bit then we could improve Brighton and Hove’s recycling levels, and set an example for others to follow.

An exciting upcoming series of free events called The C-Side Challenge is about to launch in Brighton and Hove.  This is a programme of workshops targeted at inspiring conversation and collaboration around ensuring that we collectively create a cleaner, greener future for our community and embrace the principles of One Planet Living. This is a good opportunity to do something about the issues I have talked about in this blog post, if you’re interested. Also, I would like to hammer home that if you come across something you don’t want, think of ways to reuse the object or contact Freegle – don’t just throw things away!

Another way to get involved is through letter-writing. At ONCA we are looking into holding letter-writing workshops in the near future; we feel there is something very special about a handwritten letter. We had been reminded at a previous event led by Nick Mole from PAN-UK of the power of letter writing. If you want to do more, write to big corporations, supermarkets and anyone else you see fit. Positive Action!