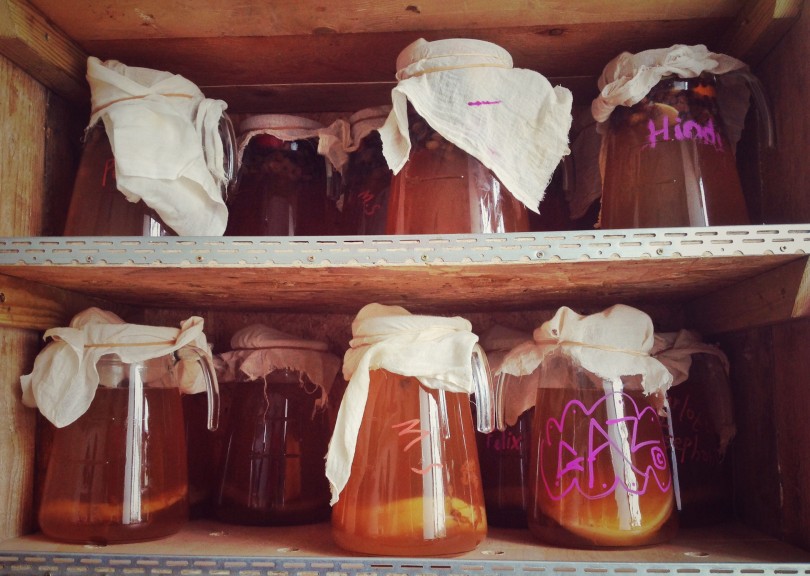 On the 16th of July, Old Tree Brewery came to ONCA to demonstrate to a group of our volunteers how to make some fermented drinks.

In a recent blog we detailed and discussed Old Tree’s ethos and approach, and this had consequently left me anticipating the drinks-making workshop to be a long and complicated process. However, within an hour we had each very simply made two different pro-biotic soft drinks: water Kefir and Kombucha.

Firstly we were shown how to make water Kefir. This is first cultured by using a SCOBY (Symbiotic Colony of Bacteria and Yeast) which is placed into a jug of sugar water. These metabolise sugar and contain gut-friendly bacteria and a variety of organic acids and enzymes. Extra nutrients were then added to the mix: 4 tbsp of raisins/sultanas, and half a lemon to help drop the pH of the freshly brewed mixture. We then added the optional ginger and any other fruits of our choice, before securely  covering with a muslin and placing onto our newly built fermentation station. Surprisingly, we were told that the mixture only needs to be left for 48-72 hours depending on the temperature (ideally around 20 degrees Celsius). A clue that the fermentation is well underway is when the raisins/sultanas begin to float to the top of the jar.

Once the Kefir had been made, we then moved on to the Kombucha, known in China as ‘the elixir of life’. Kombucha is a fermented, sweetened tea which tastes similar to sparkling apple cider and champagne, depending on what kind of tea you use. Kombucha is made by fermenting tea and sugar combined with a SCOBY. The yeasts in the SCOBY convert the sugars into ethanol while the acetobacter converts this ethanol into acetic acid. In addition, it is thought that at least 75% of the tea’s caffeine is consumed during the fermentation process.

Once the drinks had been made and we had partaken in a ceremonious walk to the fermentation station- with our drinks in hand- it became clear how simple and low-input fermentation can be! Unfortunately, in the society we live in, the mass production of food made with shelf-life and profit in mind often results in food being rendered lifeless, nutrition deficient and unhealthy. Fermented drinks however help with your overall health as they restore good digestion. Water Kefir does everything from improving your skin and nails to cleansing your liver; while Kombucha has been linked to fighting cancer, arthritis and other degenerative diseases.

Therefore, it now seems surprising that more people don’t make them at home. Perhaps this is down to many of you having the same preconceptions as I did, such as fearing that I wouldn’t be able to make them as well as shop-bought versions, or that I wouldn’t have time to make them. Yet actually the recipes are simple and take no time at all to make, while the SCOBY only needs to be purchased once and can be reused from then on.

This made me think about how ingrained it is in our society to buy and consume rather than to produce ourselves, and how we throw things away rather than re-using them. The workshop taught me a lesson, and how we can all learn things from the Old Tree, who are also the botanical brewery of Silo, the inspired zero-waste restaurant and pre-industrial food system in the North Laines.

I hope, in doing this blog, that I am passing on the knowledge I acquired at the fermented soft drinks workshop, and that this encourages you to try fermentation yourselves at home.