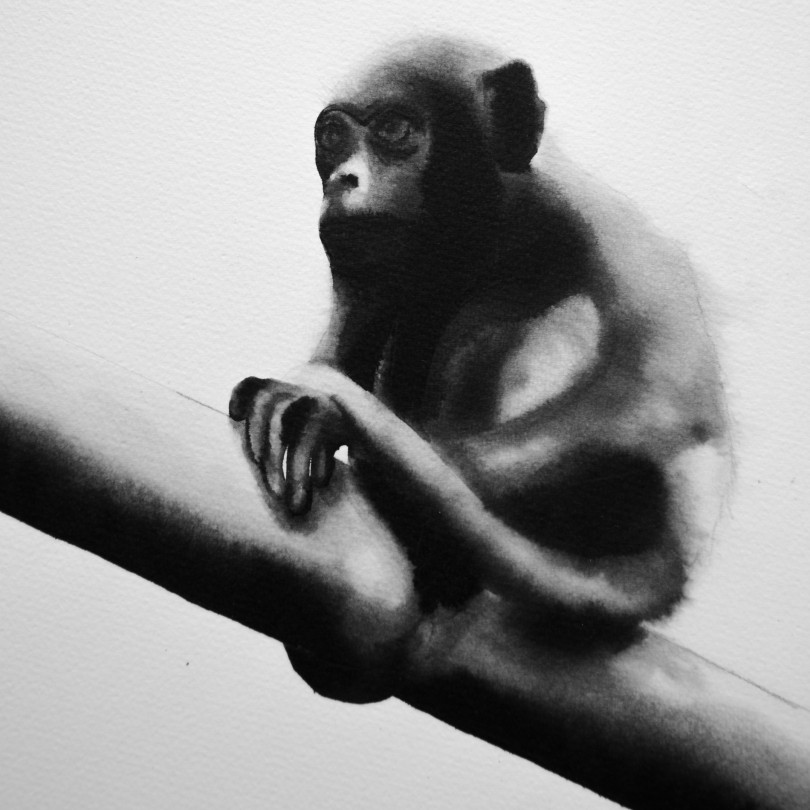 Jennifer Hooper – To The Trees: A Changing of Home

Currently here at ONCA we are showing Jennifer Hooper’s amazing solo exhibition To the Trees: A Changing of Home. The work showcased was created during and as a response to Hooper’s residency with the organisation Comunidad Inti Wara Yassi (CIWY) in Bolivia.

CIWY is a Bolivian organisation which works towards creating a safe and healthy habitat for animals that due to human interference, can no longer live in the wild. The animals in the three CIWY habitats have been rescued from trafficking or life in circuses and zoos. Jennifer first encountered CIWY when she was travelling in Bolivia in 2004. Although she only worked with the organisation, and the animals, for a few weeks, the experience had a profound impact on her, and has affected and guided her artistic work ever since;

“The privilege of working with the animals was magical and at times terrifying, an experience both removed from anything I had done before and yet familiar.”

Back to the jungle

In 2012 Jennifer met ONCA founder Laura Coleman and the two of them discovered that they had a mutual love of CIWY. As it happens, it was Laura’s chance encounter with the organisation back in 2007 which had led to the foundation of ONCA in the first place.

Laura Coleman, now a trustee of CIWY, was determined to promote the Artist in Residence programme with the organisation and the two of them started working towards sending Jennifer back to the jungle. After a successful kickstarter campaign Jennifer sat foot in the Bolivian jungle once again in 2013.

During her stay Jennifer formed a strong connection with especially one of the animals, Juancho a one-eyed jaguar;

“I was moved by the fact that despite his traumatic life prior to coming to the refuge he had such a trusting nature. CIWY offers animals like Juancho a second chance at a content and more natural existence” .

A big part of the exhibition is a series of intimate portraits of Juancho. With portraits such as the ones of Juancho Jennifer lets us explore the personality of the animal, which deepens our understanding of why we need to ensure the well being of these beautiful creatures. In her exhibition Jennifer also wants to expose the sharp contrasts between the beauty and natural wealth of the jungle with the devastating realities of the continuous deforestation.

After nine weeks Jennifer climbed back out of the jungle and after showcasing some of her work in the Kiosko gallery (Santa Cruz, Bolivia) she returned to the UK to finalise the pieces, which you can now experience here at the ONCA gallery. An experience which Jennifer hopes will increase our awareness of the issues taking place in the Bolivian jungle. Issues which effects us all. Even on the south coast of England.

To the Trees: A Changing of Home ends October 12th.