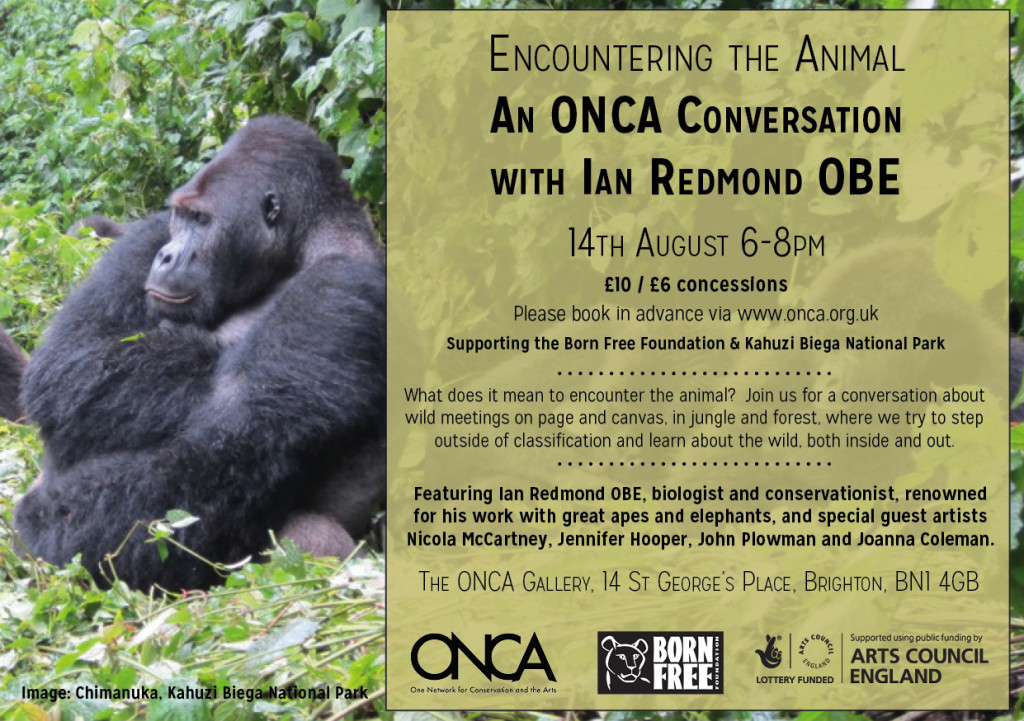 A Conversation With Ian Redmond OBE for Encountering the Animal

In association with the Born Free Foundation, we are very pleased to be getting ready to welcome world renowned conservationist Ian Redmond OBE to the ONCA Gallery on the evening of Thursday 14 August for Encountering the Animal.

As part of our becoming-animal exhibition Exile, ONCA is hosting a conversation event with world renowned conservationist Ian Redmond, and invited artists including John Plowman, Jennifer Hooper, and Nicola McCartney whose painting ‘Don’t Jump’ features in the exhibition at ONCA Gallery.

Here is a bit of background on our special guest for this event:

Ian Redmond is a biologist and conservationist, renowned for his work with great apes and elephants. For more than 35 years he has been associated with Mountain Gorillas, through research, filming, tourism and conservation work. He has served as Ambassador for the UN Year of the Gorilla in 2009 and for the UNEP Convention on Migratory Species since 2010.

As with his mentor, the late Dr Dian Fossey, the main focus of his work shifted in 1978 from research to conservation work, after poachers killed Digit – a young silverback in one of the Karisoke study groups – to sell his skull and hands. Finding the headless, handless body of a gorilla he regarded as a friend was a turning point in his life. Ten years later in Kenya, the shock was repeated when some of the cave-elephants he was studying were killed by ivory poachers.

As a result, Ian became a conservation consultant and advisor for organisations such as the Born Free Foundation, the Gorilla Organization (for which he became Chairman of the Board of Trustees in 2012), the Orangutan Foundation, International Fund for Animal Welfare, etc.  To encourage such groups to work together, he established and chairs the Ape Alliance (95 organisations linked via www.4apes.com), and previously the African Ele-Fund and the UK Rhino Group. He was Chief Consultant and Envoy for GRASP – the UNEP/UNESCO Great Apes Survival Partnership www.UN-GRASP.org he helped launch in 2001 – until 2012 and continues as a consultant for UNEP and the FAO on matters pertaining to apes, bushmeat, forests and related issues. He is now the Ambassador for Virtual Ecotourism, and a member of the team developing this exciting concept for immersive, interactive conservation education, which can be experienced at www.vEcotourism.org

Born in Malaysia, Ian’s passion for animals developed during his boyhood in Beverley, a market town in Yorkshire, and after University, took him in 1976 to Africa. There he joined Dian Fossey, studying and protecting the mountain gorillas of Rwanda and Zaire. This work also led him into documentary film-making. Ian is the man who introduced Sir David Attenborough to the gorillas in 1978, for the famous BBC ‘Life on Earth’ sequences, and who taught Sigourney Weaver to grunt like a gorilla in 1987, for her award-winning role in the film ‘Gorillas in the Mist’ (in which he is characterised as ‘The Worm Boy’). He has advised in the making of, and/or appeared in about 100 documentary films for the BBC, National Geographic Society, Discovery Channel, TF1, etc. and the 3D movie ‘The Last of the Great Apes’ www.thelastofthegreatapes.com. His books have been translated into many languages and he is in demand as an entertaining and thought-provoking public speaker.

Putting conservation principles into practice, he has led anti-poacher patrols, guided film crews and/or special interest tours into close encounters with gorillas, chimpanzees, orangutans, elephants and erupting volcanoes, and worked to support local conservationists during the horrors of Rwanda’s and D.R. Congo’s civil wars. Under-cover investigations led him to play the role of a potential ape-buyer in order to infiltrate poaching rings in both DRC and Congo-Brazzaville and a potential Coltan dealer in DRC. His work on behalf of animals was recognised in 1996 with the presentation of the PAWS Humane Achievement Award, at a ceremony in Hollywood, California.   Ian was appointed OBE in the Queen’s Birthday Honours in 2006 and was awarded an Honorary Doctorate from Oxford Brookes University in 2011, a Lifetime Achievement Award at the New York Wildlife Conservation Film Festival in 2013 and received the 2013 Animal Action Award for Conservation from the International Fund for Animal Welfare.

Ian Redmond’s research interests also include: underground elephants – he carried out the first study and photography of elephants in the caves of Mt Elgon in Kenya and helped Sir David Attenborough to film them for the acclaimed BBC series ‘Life of Mammals’; parasites – he studied gorilla parasites, and in Papua New Guinea, discovered several new species and a new Genus of nematode worms; reptiles and amphibians – he discovered two new species of frog, also in New Guinea; and re-introducing orphaned apes, elephants and polar bears to the wild.

Asked to summarise his work, he says, “I am a naturalist by birth, a biologist by training, and a conservationist by necessity. But conservation for me isn’t just about saving species. On a larger scale, the planet needs us to save functioning eco-systems; on a smaller scale, we must also recognise that species are made up of individual animals. For me, it became personal when I had the privilege of getting to know individual wild animals in the wild… I can truthfully say that some of my best friends are gorillas, and I care passionately about them and the future of all life on Earth.”

All proceeds from this event will be donated to the Born Free Foundation. 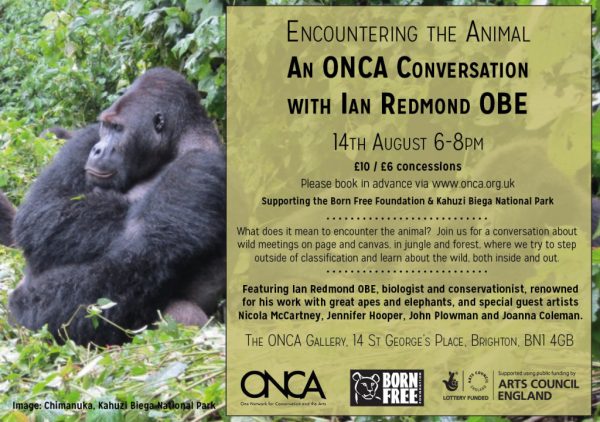